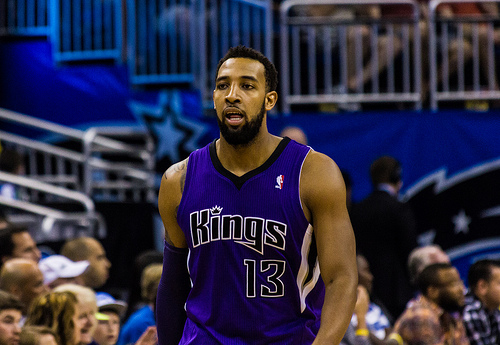 The Sacramento Kings made a pit stop into Motor City Tuesday night, where they faced a Detroit Pistons team looking to make a push for a playoff spot in the uncertain Eastern Conference. Despite a rather impressive and fundamental showing in the first half of the  game, the Kings would be ultimately plagued by poor shooting and missed opportunities, giving the Pistons a 99-89 win at home.

Both the Kings and the Pistons boast one of the premier centers in a league, but with virtually no depth at the position, and the back-and-forth battle between Sacramento’s DeMarcus Cousins and Detroit’s Andre Drummond did not disappoint. Drummond is one of the league’s most dominant rebounders and Cousins has proven to be a double-double machine; their matchup was a key for both teams, which hoped to impose their will on the boards early through the two centers. With a little help from another strong rebounding performance from Reggie Evans, Cousins outdid Drummond’s dominance on the glass with 14 rebounds of his own, giving Sacramento a number of fastbreak opportunities against a slower Pistons lineup.

However, as was the case Tuesday, opportunities don’t always mean production. The Kings gave up a number of fastbreaks in a game that was defined by missed chances and blown transition offense. Ben McLemore mishandled the ball at times while running in transition, even botching a layup which should have translated to two easy points. When it wasn’t poor transition shots, there was always something about the fastbreak opportunities which crippled the Kings’ chances at easy buckets.

At times, Cousins attempted to dribble the ball from end to end, attempting a Blake Griffin-like onslaught of dribble moves and shakes which were useless, ultimately leaving Sacramento with nothing more than a stagnant offensive possession.

In this area, Drummond seemed to be the more mature offensive player. He is a beast in transition, running from end to end smoothly in a way only few NBA centers can do. He grabs rebounds, gives the ball up to his point guard, and bolts down the court, standing at the ready for any lob, rebound or tip-in that might come his way. He was effective in transition throughout Tuesday’s game, and Detroit looked to him and Josh Smith in transition to take advantage of Sacramento turnovers.

Despite the excess of Kings turnovers, there were a few bright spots which the team should build off to give themselves more of a chance in these types of situations; one positive being a solid performance from Rudy Gay, who seems to have redefined his game in the smartest way possible. He has learned to impose his will on defenders in ways that don’t just  help him get buckets – they assure it. The Detroit Pistons, throughout much of tonight’s game, decided to put Rodney Stuckey on Gay, a move that would prove counter-productive in the first half.

Gay flew by Stuckey almost every time they were matched up, giving him a simple head fake or a jab step, letting him fly by and into the lane for easy layups and a couple of monster dunks. Sacramento’s bench rose to its feet immediately with sense of excitement it absolutely needed in this game.

However, the excitement wouldn’t last. When they came out in the second half, the Kings instantly lost any sense of excitement and unity they had in an impressive first half. Detroit came out more focused and more ready to win the contest. Poor shooting performances out of the same players who posted good numbers in the first half did the Kings in, giving the Pistons easy chances to push the ball in transition and take advantage of poor shots and rushed offensive possessions.

The only source of consistency came, again, from Gay, along with a solid performance from Derrick Williams. While only playing 21 minutes, Williams was a rare bright spot in the second half, hitting mid-range jump shots and getting himself to the free-throw line to try and give his team a fighting chance.

In fact, Sacramento did have a fighting chance. With plenty of time left in the final quarter, the Kings strung together a few successful offensive possessions to bring the game to within eight points, but they immediately washed that momentum away with poor shot selection and offensive possessions which ended in haphazard three-point attempts. Will Bynum was thoroughly impressive in this fourth quarter for the Pistons, taking over the scoring load with eight points and seven assists to secure a crucial win.

Detroit put itself one step closer to an eight seed in the playoffs with Tuesday’s victory.

For Sacramento, there are plenty of positives to take away from the game. Impressive performances out of Gay and Cousins, as well as solid bench output from Evans and Williams put the game was well within the Kings’ reach. The team continues its extended road trip now, taking on the Philadelphia 76ers tonight.