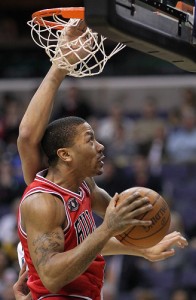 Chicago Bulls point guard Derrick Rose, limited to just 10 games this season due to a torn meniscus in his right knee, will join Team USA for its training camp this summer in preparation for the World Cup of Basketball in Spain, national team coach Mike Krzyzewski said Tuesday.

“We expect him to be there that last week of July when we’re choosing the team in Vegas,” Krzyzewski said during an “ESPNU College Basketball” podcast with host Andy Katz. “He can’t make the team unless he’s ready to go full bore. And knowing Derrick I would think he’ll be ready, and hopefully he’ll be 100 percent.”

Rose suffered his latest knee injury — he missed the 2012-13 season while recovering from a torn ACL in his left knee — on Nov. 22. Bulls coach Tom Thibodeau said earlier this month that the former league MVP had started taking contact in practice.

Krzyzewski and the Team USA staff have a pool of 28 players eligible for the World Cup, to be held Aug. 30 to Sept. 14. Only 12, however, will make the Spain-bound team. ESPN

Is this a good thing or a bad thing for Bulls’ fans? There are legitimate arguments for Derrick Rose playing on Team USA, and for waiting until the NBA season begins to start playing in full games. No one has sat out as many games as Rose for a knee issue and fully recovered.

When he returns doesn’t matter. More rest will not save Rose from future injuries. He can’t play without high risk of injury. It’s that simple. He’s too stubborn to change the way he plays to soften the wear and tear on his body so you just have to live with who he is, a wild bull. That’s as fitting for this franchise as it can get. – AL