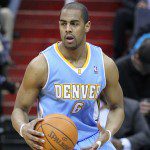 The Denver Nuggets have traded Evan Fournier and a second round pick to the Orlando Magic in return for Arron Afflalo, who will begin his second stint with Denver. Afflalo averaged 18.2 points, 1.8 three-pointers, 3.6 rebounds, and 3.4 assists in his second season with the Magic and will continue to be a valuable source of 3-pointers for his fantasy owners in Denver. Fournier is a solid bench player, but the move seems like a bit of a head scratcher for Orlando as the main benefit of the trade comes in the form of $6 million of salary cap relief. RotoWorld