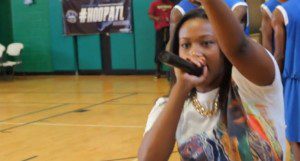 Image courtesy of Danny Digital. The voice of the AEBL, Bria Janelle, gets the crowd hyped for some intense basketball action.

The Atlanta Entertainment Basketball League went into the third week of the season this past weekend. On Saturday and Sunday, Central Park in Atlanta looked to bring the Highlight Factory feel back to the city.

The day kicked off with Good Life Music Group taking on Hand Down Man Down. The teams came in with records of 1-1, so this game meant a lot to both squads in the standing.

The game was played indoors thanks to the Atlanta weather, but that didn’t slow down the game play at all. Both squads came out swinging early, exchanging leads all the way through the fourth quarter. While HDMD had the advantage in the post, Good Life had the advantage at guard and that advantage is what won the game for them. When the buzzer sounded, Good Life Music Group picked up their second win on the season with a score of 75-65.

The second game of the day pitted Land of Flyy against defending league champions Gold Gang. Gold Gang brings out nothing but size on the frontcourt. Led by former Charlotte Bobcat and Golden State Warrior Jamareo Davidson, the Gold Gang took the lead early and never let up. The size of Gold Gang was no match for Land Of Flyy.

The last game of the day was a highlight reel! Street Execs took on Forbes Atlanta. Forbes was out-matched from the jump and it showed. Street Execs had a double-digit lead for the majority of the game. In the fourth quarter, with things looking like bleak for the Forbes Atlanta team, they decided to just put on a dunk show. The last three minutes of the game featured an all-dunk and ally-oop session between both teams. Stay tuned Wednesday for Episode 3 of “The ‘A’ Game” and you’ll see many of them.

At the end of the day, Street Execs conquered 76-51. Street Execs are now 2-1 in the league with their only loss coming at the hands of Gold Gang.

Sunday came in and the highlights continued, starting with the first game of the day.

CTC (Cut The Check) took on Court Cred. CTC is coming off a loss last weekend to Street Execs. From the tip-off the CTC boys came out gunning. After a quick dunk and two lay-ups, they were up 6-0. They would open up a bigger lead as we moved into halftime.

Court Cred wasn’t just going to get pushed around. They fired back several times at CTC but never really came close to capturing or maintaining a lead. CTC would go on for the win, 61-56.

Uptown Sounds was 2-0 and looking like a real contender for Gold Gang. The team boasts several players over 6’5″, all who can shoot, jump, and bang with the best of them.

Grind Hard found that out yesterday. Uptown Sounds jumped out to a big lead early. They went all the way through the third quarter maintaining the lead thanks to great shooting from behind the arc and good defense in the post.

As the seconds ticked away in the fourth, Uptown Sounds won the game 64-48 and walked into 3-0 status.

This Wednesday, you can see what you missed when the third episode of “The ‘A’ Game” premiers on Ballermindframe.com