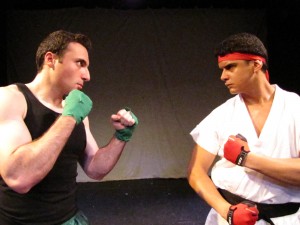 “Mightysaur dropped four ranks. Your parents made a bad investment
in your gaming career.” – Game Console

Online Fighting, written and directed by Harrison Young, takes audiences into the life of Lucas Jenkins, a 21-year-old failed professional gamer who still lives with his mom. Through complete fault of his own, Lucas has no job, a Pizza Rolls diet, and no ambitions beyond winning the next National Video Game Tournament, that is until Josh Harmony, his former best friend, re-enters his life via online gaming. The hi jinx begin when an error on the online gaming server unblocks Josh from Lucas’ friends list, allowing them to speak for the first time in three years. The two combatants decide to play Super Duper Smash Fighters while they catch up on old times, rekindling a feud that lasts the duration of the play. 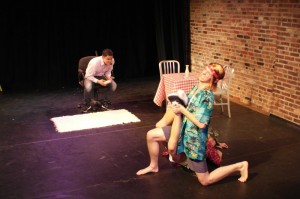 Josh panics while playing Super Duper Smash Fighters as his character, Alabama Sam, is locked into the Sharpshooter submission hold by Sunny Joe.

Contemporary art often goes too far out of its way to appear avant garde and distinguish itself from previous eras by awkwardly forcing new cultural norms and technologies into the final work. The technology and gamer jargon of Online Fighting are simply a part of the setting, and its characters are akin to people we know in real life. Everyone has seen the frustration of a parent attempting to help their young adult child face the realities of the real world while also supporting their unrealistic goals. Gamers know the bitter exasperation of losing to a tough opponent. We all like violence and there’s no shortage of violence in Online Fighting. As a result, the play is an enjoyable experience for a variety of demographics, gamer and non-gamer alike. 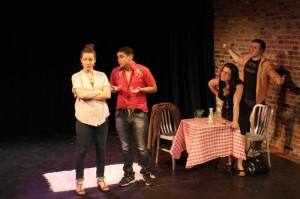 Audiences are able to witness the fun fights of Super Duper Smash Fighters and the National Video Game Tournament courtesy of the stage combat. Each fighter has crazy special moves, cheesy dialogue, and wacky taunts just like the actual video games that influence the work. Tens of video game references that span several genres of the medium are present although I won’t spoil them here. The comedy and drama apart from the fights are also very strong, more than able to carry the show when the action leaves the virtual realm. The actors are clearly enjoying the show and their enthusiasm for this production takes each scene to the next level. There are also chances for the audience to break the fourth wall when Shiggy Razor, the host of the National Video Game Tournament, asks the audience to cheer (or boo, why not?) for the competitors as they battle for the grand prize.

I highly recommend this play for anyone who has an affinity for video games. If not, it’s still a play with a ton of fun moments including the worst proposal of all-time, ludicrous dreams, coy drinking games, and excuses to interact with the actors on stage.  It’s unlike most experiences you will find in theater. If you are in the New York City area, give Online Fighting a shot and see for yourself! 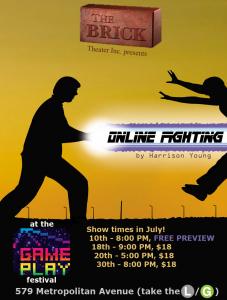 The next and last showing of Online Fighting takes place at 8:00 p.m. on Wednesday, July 30 at  The Brick Theater in Williamsburg as part of the sixth annual Game Play Festival, which features plays about video games. Be sure to check out more about Online Fighting and the other plays in the festival at The Brick’s website.