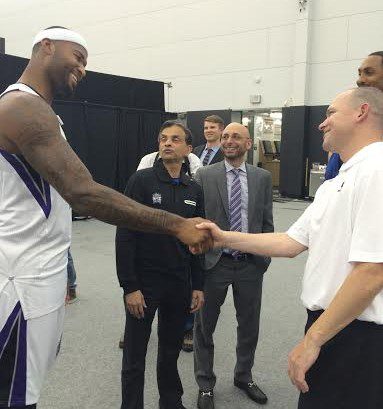 NBA head coaches make it their mission to relay the idea of defense over offense as much as possible, and emphasize the focus they’ll be placing on that concept throughout the respective team’s system. For some coaches, this emphasis is a result of genuine belief that the best basketball teams utilize defensive focus more than offensive focus, to win games and play to maximum potential.

Some coaches, on the other hand, have understood and found what seems to be true about basketball: as popular as it is for a head coach to claim that defense, and defense only, wins ball games, offensive prowess and the ability to score are pretty damn important too. Look at Gregg Popovich with the defending NBA champion San Antonio Spurs. With a starting five of Tony Parker, Danny Green, Kahwi Leonard, Tim Duncan, and Tiago Splitter, it seems that on paper this team should be torn up on defense every night. Sure, the offense is clearly there and the Spurs play virtually perfect basketball when they hold the rock, but a league with shooting guards like James Harden, Bradley Beal, Lance Stephenson, and Dwyane Wade should be giving Green enough of a problem to be a huge detriment to the Spurs defense, right? With the balance on both sides of the floor, the team is almost never worried. Sure, Pop expects and will assure that his guys reach every assignment, but he is also just as sure to expect a bucket on the offensive end after every single possession.

The balance between offense and defense appears as elementary as the fact that a basketball is round. Sacramento Kings head coach Mike Malone is trying to get that perfect equilibrium for the Kings.

When he was first assigned the head coaching job with the Kings, Malone had a near-perfect resume of turning around terrible defensive teams into considerably better defensive teams. With Travis Outlaw making the rest of the Kings’ players look like chumps on some nights through his hustle, which the rest lacked, it was clear why Malone was hired. Afterall, defense wins championships, right? According to hoopsstats.com, the Kings finished 30th overall in defense last season. When the team allows 106 or more points in a game, they have a 6-31 record, a very inviting sum for opposing offenses who run and score on Sacramento without much of a hassle.

While this defensive rating is obviously the worst in the league and a clear indication of the team’s main woes during the 2013-14 season, the gap between its defense and offense is the most concerning factor. The Kings finished 10th in offense, with a record just under .500 when at least 94 points are put up on the board. The gap between the team’s offensive and defensive production last year was immense, likely one of the main outcomes of Isaiah Thomas‘ ritual of dribbling the ball for 20 seconds, tiring everybody out, and then taking a shot that he would miraculously make. He would then slowly return to defense and allow a physically imposing point guard set up his teammates and score to make the Kings’ lives that much more difficult defensively. While much of the blame can realistically be attributed to Thomas’ playing style, which will NOT be detrimental to the Phoenix Suns’ team, there was a clear imbalance.

It isn’t accurate to say that the Kings are just bad defensively. In fact, much of the team’s defensive struggles are a direct result of how difficult scoring was when the ball wasn’t in the hands of Thomas or DeMarcus Cousins. Sacramento has had no other legitimate threats besides Rudy Gay, who was the team’s most solid-as-a-rock player last year with his level head and scoring efficiency. It’s clear that the upcoming season needs to see improvement in the ease with which the Kings score, and will likely translate into a team with more energy to spend on defense.

Malone has already expressed his excitement at the prospect of working with Darren Collison, his new point guard who will add more ball movement to the team’s offense. With defense being Malone’s go-to approach to the game in years past, it’s clear that the transition into a more balanced approach is being made.

“We talked about how [the way] we played offensively was unnacceptable. Wether it be the system, the plays, or more importantly, moving the basketball,” Malone said regarding last season’s team. “Be unselfish, don’t hold, [and] we want to trust the pass. If you’re holding the ball, you’re wrong. If you’re standing, you’re wrong. We want to understand that we should make plays for our teammates.” In just his second year as head coach, Malone seems to have identified some of the gaps in the team’s offensive performance. With how quickly his team grew tired on both sides of the ball last season, it appears the ball movement and quick passes will be heavily utilized. Even the team’s draft choice is indicative of that fact as Nik Stauskas’ ability to drive and create from the shooting guard position adds another dimension over Ben McLemore, who is mainly centered around shooting rather than creating for his teammates. Malone explained these differences mentioned in the quote in training camp, and appears to have recognized a balanced approach and placing importance on offense, which before had not been the case.

Even with Malone’s comments on areas for improvement on one side of the floor, he was quick to remember his roots as a basketball mind and explained that defensive strength is still just as important, but is also a result of offensive production. Where before the Kings attempted to turn Jason Thompson into a decent defensive player, Malone’s staff now understands what Gregg Popovich understood years ago: There is no one dimension of basketball. When both sides of the ball are strong, great teams are made. Again, it’s a very basic concept, but it’s still important.
“Our best defense will be our offense,” Malone stated on the increased emphasis on both sides. “Our offense will allow us to get back, set up our defense, and become a much improved defensive team. I think those are the two big things – being unselfish and having a team mentality.”

It might just be the start of the NBA season talking, but picturing a Kings team that actually shares the ball with each other and works as a unit is an unfamiliar, but inviting concept. Coach Malone may be on his way to finding balance in his roster, an immediate necessity heading into next season. The team’s record will improve this coming season, although not by much. Where last year the team had long veteran contracts and used all its resources on another losing season, this year’s team will likely play better as a unit with much more cap space to make future moves. And who knows, maybe the team’s defensive ranking won’t be last in the league by the time the 2014-15 season comes to a close either.