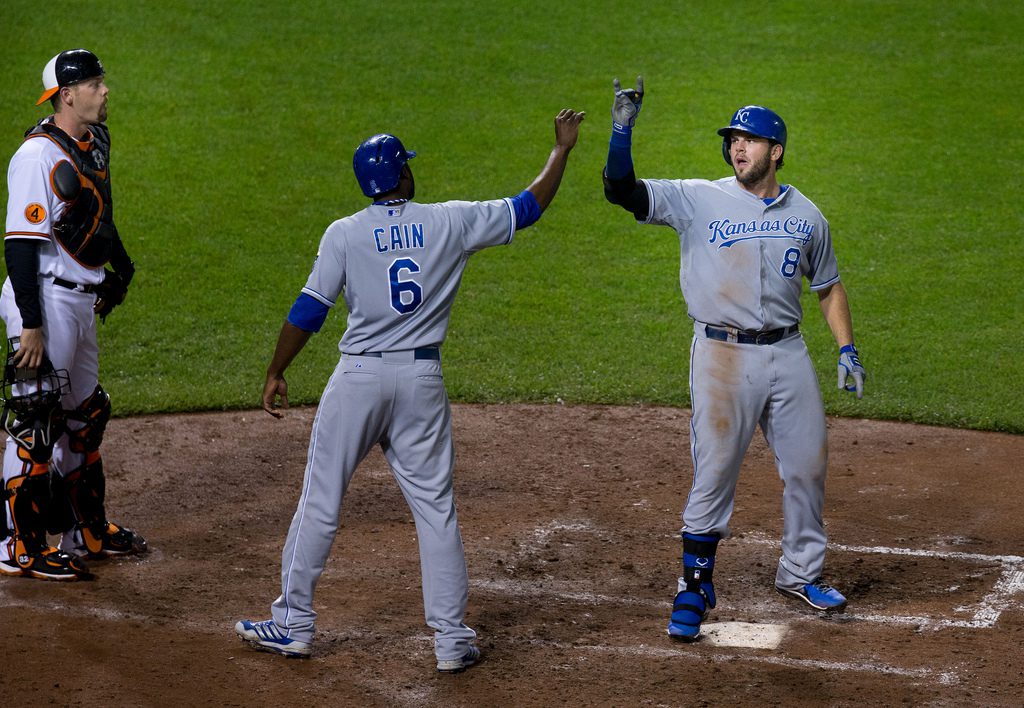 The best evidence that the Kansas City Royals love Ned Yost, their bumbling manager, sailed into the right field stands of Oriole Park.

Alex Gordon’s home run in the top of the 10th inning bailed the skipper out of another managing faux pas when he yet again played defense against his own team by pulling starter James Shields after five innings.

Shields wasn’t great, but he mixed his pitches well and kept the Baltimore Orioles off balance just enough to preserve a 5-4 lead prior to his removal. Shields primarily worked low and away, mixing his array of fastballs with his breaking ball and changeup. Baltimore scratched four runs in five innings not through the trademark long ball but through stringing hits together. Though Shields allowed 10 hits, his five innings of work consisted of wriggling himself out of various jams, the most foreboding being the third inning when Gordon’s diving catch in left-center ended the inning. Shields threw only 90 pitches then watched as Brandon Finnegan wilted and surrendered the tenuous one-run lead.

The night started out unexpectedly for the Royals when Alcides Escobar, long known for his leather-bound exploits, cranked a home run to left field off Chris Tillman. Tillman struggled with control during his abbreviated outing and surrendered four more runs after Escobar’s solo shot. Three of those runs came in the top of the third inning when Gordon’s broken-bat double seemed to bob towards the foul line but landed fair. The Orioles promptly answered in the bottom of the inning when Adam Jones singled to score Nick Markakis.

The Royals regained their four-run advantage on Billy Butler’s sacrifice fly in the top of the fifth. The bottom of the fifth saw Nelson Cruz collect an RBI double and Ryan Flaherty drive in two runs with a single. The Royals advantage was whittled to a single run, prompting Yost to dismiss his ace from further responsibility in the game’s outcome.

Finnegan’s arrival in the sixth was greeted by Baltimore’s lineup loading the bases and Alejandro De Aza flipping a soft fly ball beyond the pitcher’s mound to tie the game. Finnegan was removed and the first of Kansas City’s heat-throwing bullpen triumvirate, Kelvin Herrera, locked down the rest of the inning. The game progressed rather uneventfully until the top of the 10th.

Gordon, the one-time symbol of Kansas City’s futility in drafting and developing talent, scorched Darren O’Day’s offering into the right field seats. After Salvador Perez reached base, Mike Moustakas deposited Brian Matusz’s pitch into the same right field area as Gordon. Yost’s questionable decision-making regarding his pitcher selections seemed to be vindicated. Greg Holland took the mound for the bottom of the 10th, quickly secured two outs before allowing two runners on base. Delmon Young stepped to the plate representing the tying run and singled home Flaherty. Markakis represented the winning run but would ground out to second base, giving Holland the save and the Royals their first ALCS victory since 1985.

Yet questions remain. The Royals played courageously enough to earn the win over the Orioles, but once again Yost failed to acquit himself managerially. Had Shields remained in the game for the sixth inning it’s evident Kansas City fans would be jubilant instead of sighing in relief.