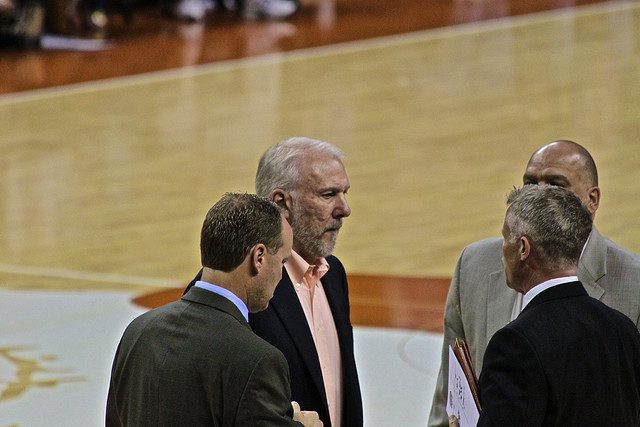 Bryan Brandom: Stan Van Gundy
This one’s always a tough one to pick, as it more often than not comes down to circumstance rather than who coached “best” during the season. But the easiest predictor for Coach of the Year is the largest increase in win total for a team with a new coach. Enter the Detroit Pistons, who won only 29 games out of the horrific East last year. Andre Drummond is oft compared to Dwight Howard (or, even better: a Dwight Howard that embraces the pick-and-roll), whom Stan Van Gundy took the 2008-09 NBA Finals with an otherwise underwhelming roster Orlando Magic. That’s a lofty goal for this team, but in the East, this team could creep into 40+ wins and the playoffs.

Corey Quincy: Tom Thibodeau
I believe in the Chi-town system this season, and Tom Thibodeau has played a huge role in making this team work. His defensive outlook has worked wonders, and under much less favorable circumstances than we’ll be seeing in 2014-15. With a healthy Derrick Rose, Pau Gasol making the move from L.A., and Doug McDermott drafted and developing, Thibodeau can lead these men to the NBA Finals or better.

Aaron Lanton: Lionel Hollins
Lionel Hollins was fired by the Memphis Grizzlies after posting a 56-26 record and taking the team to its first Western Conference Finals appearance. He did not deserve to be let go, but it’s water under the bridge now. The Brooklyn Nets get an excellent coach with an emphasis on defense and fundamentals. Hollins plays to the strength of his players and will find ways to utilize this roster effectively. Expect to see lots of post play since each starter is capable of operating in the paint. Nets fans are surely looking forward to this after the Jason Kidd mess. The team lost some talent but remains one of the favorites to win the Atlantic Division thanks to Hollins’ coaching.

Steven Covella: Gregg Popovich
The NBA is home to some great coaches with wide-ranging philosophies. Some come from the old school, and stick to a more traditional inside-out game, and some are more experimental, pushing the game forward. All of them, though, share at least one thing in common—they’re playing checkers. Gregg Popovich is the exception, and he’s a chess grandmaster. In an era of high-fliers and seven-seconds-or-less, the San Antonio Spurs play the most fundamental style of basketball in the league, and they do it to beautiful perfection.

Every Spurs player on the floor is acutely aware of where his teammates are, what the defense is doing, and what it’s going to do. Off the ball, players cut to the basket and wait patiently along the perimeter, as the guys with the ball break down the defense with well-timed penetration and precise passing. Their passes whip crisply along the arc and sneak through defenses. It’s all part of Popovich’s system, and, aside from the team’s big three (whose talent and contributions can’t be marginalized), he does it with league castoffs.

TJ Macias: Rick Carlisle
Last year, there was no Instagram filter that made the Dallas Mavericks’ defense look prettier—or even decent. Trust me, I checked. In the 2013-14 season, they ranked 22nd in the league on D and while they played like cougars on the offense, they looked like kittens (awww) on defense. Rick Carlisle tried his best to work his starters and his bench on that end of the court, but he could only do so much with what he had. Now, with Tyson Chandler thrown back into the mix and an extremely deep bench, I believe Carlisle will prove to naysayers that he belongs near the top of a very short list of the best NBA coaches. His patience is staggering and he tends to stalk in the tall grass a bit before pouncing. The 2014-15 season will be his time to shine.