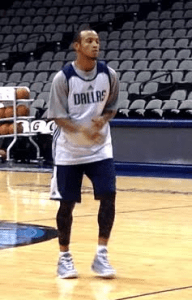 Following their game against the visiting Minnesota Timberwolves, the Dallas Mavericks’ locker room was decorated with the captivating laughter of Charlie Villanueva on that damp Saturday evening, his mirthful echo bouncing off the walls of the American Airlines Center. A few lockers away from him, Jae Crowder shook his head and laughed deeply himself as he finished getting dressed, his eyes sometimes glancing over to the object of his glee. The indomitable Monta Ellis was in rare form and his charismatic nature was on display for the press to witness, something that is rather arcane when it comes to the soft-spoken Dallas guard, his belief being that talent should florish out on the court in terms of performance rather than with spoken words to the media following a game. His own laughter was intertwined in with his spot-on impression of James Brown as he held court in front of his locker. His mood transformed the room into a veritable halcyon of mirth as his intoxicating energy became contagious. Ellis had tacked on a season high 30 points in the Mavs’ 131-117 win over the Timberwolves, so his playful disposition was warranted, despite the cold chill festering outside. None of that mattered. Only this moment mattered. “He played great, and I thought he was the difference in the game,” head coach Rick Carlisle said during the press conference following the win. “He scored consistently throughout; he went back in the end and made a couple big plays.”

The lightheartedness of the interview continued when Ellis went in front of the cameras. When asked what prevented this team from exploding offensively last year, Ellis facetiously (and truthfully) answered, “Different players.”

Despite the lackluster defensive performance in the final 24 minutes, the team feels that they are doing better defensively than they have been in the seasons before, and it shows on the court. “We just need to take it game-by-game, day-by-day,” Ellis said. “It’s the beginning of the season, we have a lot of time to get going and be one on defense. We’re still learning each other, but a lot of guys out there have each other’s back and we’re scrambling a lot. That’s the biggest thing. We know we’re going to miss shots, we just need to get down there and help the big guy rebound.”

Minnesota appeared supine throughout the entire game and managed to nab a lead here and there, but it never surmounted past two points. It was guard Kevin Martin who carried the team on his back with his season high 34 points, which wasn’t enough to slow down the Mavericks. “He came out with a good mindset,” Timberwolves head coach Flip Saunders said about Martin following the loss. “He got here early, took some shots, felt better, and our guys found him. So, that was encouraging.”

Dallas, now 7-3, goes back on the road again and head to North Carolina to face the Charlotte Hornets on Monday night.