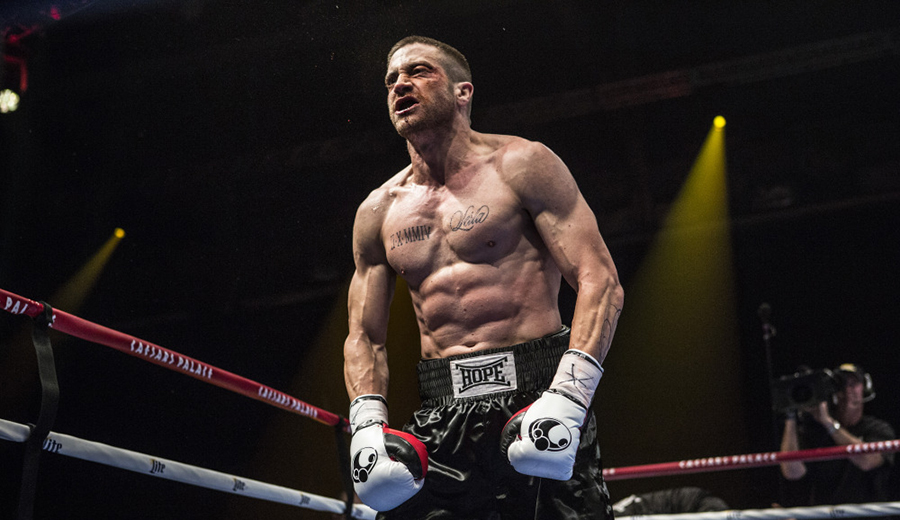 Jake Gyllenhaal has found another interesting role to devour, as he’s gotten into excellent boxing shape for Southpaw. He recently turned in arguably the best performance of his career as Louis Bloom in Nightcrawler, where he dropped 25 pounds to play the nocturnal, psychopathic camera man. Of course, physical transformation isn’t the whole she-bang, you actually have to act well too, and Gyllenhaal knocked that role out of the park.

For his new role in the Antoine Fuqua vehicle, Gyllenhaal has gained 15 pounds of muscle to play Junior Middleweight Champion Billy “The Great” Hope. There isn’t much that’s been revealed about the synopsis yet. We only know that Billy fights his way to be the top dog, yet finds his life falling apart on the way there.

There’s no doubt that Gyllenhaal is a dedicated, talented actor. You can see that he had raw talent as early as his performance in the cult classic, Donnie Darko. This may be one of those roles that will provide him with a canvas big enough to display his undeniable talents in a way that he’ll be remembered in cinema forever. Word of mouth about his training says that he was fully focused to embody the role completely.

Some are already comparing his dedication to that of Robert DeNiro, when he completely transformed himself into former Middleweight Champion Jake LaMotta in Martin Scorsese’s Raging Bull. DeNiro sparred hundreds of rounds at 14th Street Gym with La Motta himself for a solid year, and also entered three real Brooklyn boxing matches, coming up victorious in two of them. LaMotta  went on to say that DeNiro was of professional standard. DeNiro went on to win the Best Actor Oscar for his performance.

Director Fuqua has released some information on how Gyllenhaal has prepared for the role in his interview with Deadline.

“I’m so pumped, man,” Fuqua said. “Jake is going to change how people see him. I had him training twice a day in the boxing ring, he did two-a-days seven days a week. I pretty much had him with me and my trainer every day. I took him to almost every fight. I had him train at Floyd Mayweather’s gym in Vegas and we watched Floyd’s fights, and the Manny Pacquiao fight. He trained in New York at Church Gym with real fighters. We literally turned him into a beast.”

Gyllenhaal fell in love with the sport so much that he’s claimed that he’ll box for the rest of his life. Let’s just hope he sticks to acting, and doesn’t pull a Mickey Rourke. His natural intensity when he’s acting definitely complements his physique, so we’ll just have to wait and see the performance; however, it’s more than likely he’ll deliver, let’s just hope the film keeps up with his pace.