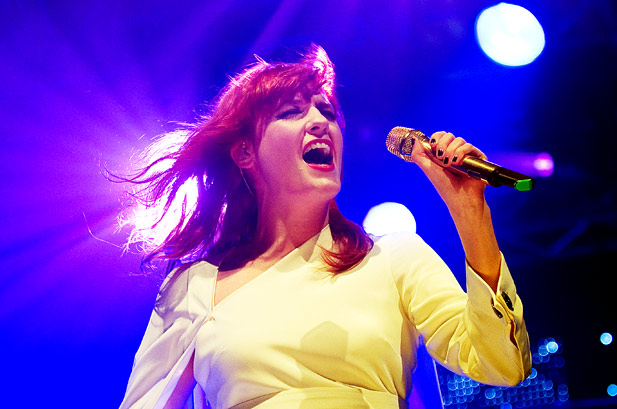 Florence and the Machine. No, it’s not a science fiction television series about a hip girl and her robotic partner. It’s an indie band that features one of the most alluring sounds in the music industry. Florence Welch represents the first part of the group’s name. A tall, red-headed beauty with angelic pipes, Welch drops soulful lyrics that evoke both a conceptual and spiritual focus. Isabella Summers encompasses the other part of the name. Machine-like in her versatile musical capabilities, Summers writes, produces, and remixes for her English group. A collection of additional artists make up the remainder.

They’ve released two records: Lungs in 2009 and Ceremonials in 2011. Both have been met with popular acclaim. A third record is expected to drop during 2015. Ceremonials is the stronger of the two and features the group’s best track, “Shake it Out.” This beautifully intoxicating inspiration is the type of track that can elevate a troubled soul to positivity, at least for a moment. Organs, tambourines, and other instruments play in the background as Welch sings with religious fervor and passionate ferocity. This song made me buy both of Florence and the Machine’s CDs and become a definite follower.

Florence and the Machine present a unique element. Gospel energy, pop type of sound, vocal excellence. Most groups don’t hold such a detailed array of representations. That gospel spirit might be the biggest element Florence and the Machine offer though. Pop doesn’t often interrelate with gospel. This area usually features religious artists who value a holy message over a starving need of success. For Welch and company, their sensational striking of pop traits gives them popularity. Their gospel sound achieves a deeper level, one that creeps into the collective psyche of the audience. This music sticks with you. It evokes feelings.

Take “Only If For a Night” for example. This initial track on Ceremonials plays right before the remarkable “Shake it Out.” What is it about? After countless listens, a concise, clear song definition probably can’t be posed. It seems to delve into childhood and human evolvement as it builds to a phenomenal climax of musical explosion. “Never Let Me Go” is a more classic love song with the title being repeated constantly throughout the track. Written by Welch and famed songwriter Paul Epworth, the heart-warming sound of “Never Let me Go” transcends its common subject matter. Even in commonality, Florence and the Machine manage to stay uncommon.

Whenever their anticipated album drops this year, expect more of what made Lungs interesting and Ceremonials extraordinary. For entertainment and listening enjoyment purposes, they have everything. Welch is the group’s central figure as her voice shines on every song. She captures the need for a talented nucleus. Summers, in living up to her deserved nickname, provides Welch with complementary background additions. This jack-of-all-trades is pertinent in her unheralded role. As a pair, they’re a perfect match. They make it possible for you to hear the gospel. You’ll even hear the pop. You’ll hear various instruments forming in the background. Just don’t expect to hear this sound anywhere else.