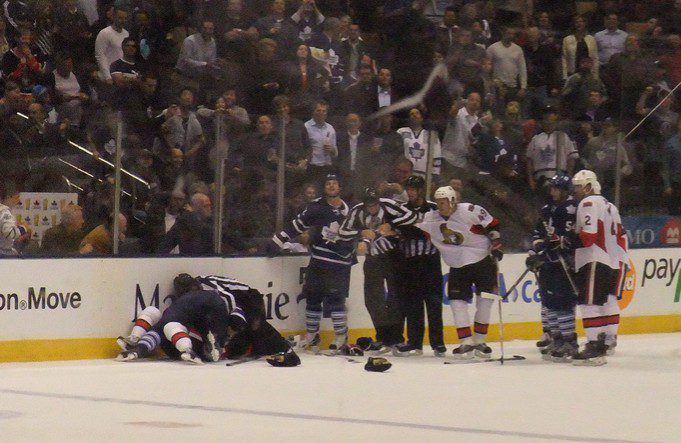 If you’re a Toronto Maple Leafs fan (and you shouldn’t be) then you’re more disappointed in this team than a dog is in their owner when they discover the car ride ends at the vet. Fans of the “Buds” have experienced more ups and downs than a rollercoaster during an earthquake this season. At one point the team was only a few points out of first place in the Eastern Conference, and has the highest goals per game output in the league. I was at a game against the Anaheim Ducks that the Leafs won handily. So what the hell happened?

Let’s take a look back at the beginning of the season, when the Leafs were doing well. The goaltending the Leafs were getting (and still are getting) is average. The odd night the goalies were stealing wins, and others they were way off, but for the most part the tandem of Jonathan Bernier and James Reimer has been in the middle of the league pack. If your plan is to play a defensive style of hockey, middle of pack isn’t good enough. Former Leafs coach Randy Carlyle wanted his teams to play fundamental hockey that limited quality-scoring chances at their own end while capitalizing on mistakes going the other way. To this end, the Leafs were not successful.

Even when the Leafs were winning, Carlyle often was caught mentioning something to the effect of “I’m not happy with the way we won”. Many media critics would rebuff these comments with the equivalent of “it shouldn’t matter how you win, so long as you win”. I couldn’t disagree more. Don’t get me wrong here, a win has to be the ultimate goal. You are not awarded a playoff spot or a trophy for competitive games. But how you win or lose says a lot about what sort of team, what sort of players, what sort of coach, you have. Carlyle saw his plan was not being executed. He saw players making less than optimal efforts, and he wasn’t happy.

When the Leafs entered into a slump, the negativity that Carlyle had been exuding all season took its toll and the Leafs decided to sever ties with their head coach. New head coach Peter Horachek was brought in to right the ship. Actually, Horachek was already on the Leaf’s staff as a secondary assistant coach. When the team made the move to bring on Horachek, it seemed suspect from the jump since no other team had two assistants. Why would you do this unless you were grooming the guy to take over? Under Horachek the Leafs are 1 – 12 – 1, and have gone on their longest losing streak in over 50 years .

Even experts have a hard time explaining where the goal scoring has gone. At least when Carlyle was the coach, the losses were 5 – 3 as opposed to Horachek’s games where the defensive effort from the Leafs just didn’t seem present. Now it seems as though the Leafs are lucky to score a goal a game. Horachek hasn’t introduced a new system; he’s not even trying to fix anything and it appears, at this point, he just wants the season to be over. If you asked him if he’d like to play every single one of the remaining games on the schedule in succession starting tonight, (meaning the Leafs would finish their season in early March) he’d be all for it. The team actually appears to be all for it.

It is widely speculated that the Leafs will sign Mike Babcock at the end of the season to some insane contract. Babcock is in his last year with the Detroit Red Wings and has done nothing but win since taking over the post there. It would take anyone a great deal of time to fix the landslide of issues with Toronto, but Babcock certainly would be someone who could do it… in about three years or so.

I’ve mentioned in many past articles the idea of an “old school coach”. A man who fundamentally believes in a system, and looks for players that work within his system, as opposed to adapting a scheme to work with your players. Carlyle and Horachek are old school coaches while Babcock is new school. Babcock not only looks at his scheme from year to year, but also game to game. He forces opponents to play in a manner that they are not comfortable with. But could he fix the Leafs?

The Leafs are saddled with players that are earning far beyond what their talents would dictate. I won’t name names (couch, hack wheeze, Phaneuf, burp – sorry, excuse me). The team is going to be LUCKY if they can trade these guys away for younger players with more potential who are also underperforming with their current teams. I’ve said three years because I believe it will take that long for Babcock to understand the players he has, draft the ones he covets, and trade or release the guys that are garbage (couch, hack wheeze, Phaneuf, burp – sorry, bad cold).

If it’s not Babcock than the process is going to take as long as five to 10 years. The team simply seems to believe in the “money pit” philosophy of players. “Well, maybe if we give the bad player more money he’ll play better?” This thought process makes about as much sense as “Well maybe if we shoot ourselves in the foot this headache will go away.” The worst part about all this is that the fans won’t stay away. They can’t!

The Leafs have a predominantly corporate ownership of their seasons tickets. The waiting list for season tickets hasn’t moved in decades – I know because I am on it. When a true fan gets the opportunity to pay twice the face value of a ticket, they jump at the chance, even when the team is doing poorly. The Leafs, on their own, make more than over half the NHL combined. They do that while putting a sub-par product on the ice year after year, after year. So why change? Why do anything other than rake in the cash? The short answer is you wouldn’t change anything. You’d allow the losing and your bank account to achieve new heights. When fans finally stop showing up, maybe then the team will decide to make a change. I just hope the fan base isn’t totally lost at that point.