Some time in February 2016 the Deadpool movie, starring Ryan Reynolds will be released. For now, all we have is some test footage and a tweet from Reynolds with a prototype of his new fit.

The only thing that was good about X-Men Origins: Wolverine was Reynolds playing Deadpool for about five minutes. He was sarcastic, deadly, and entertaining as hell. Then they took away his ability to talk. Great. He’s called the “Merc with a Mouth” and he can’t say anything? Way to be creative there.

Anyways, if you don’t know who Deadpool is, he’s a wonderfully unstable mercenary that has an accelerated healing power, which was given to him by the Weapon X program. He can regenerate at a superhuman rate and is immune to all types of diseases. Yes, that means he has no need for rubbers. He’s also a master of various martial arts, and an expert swordsman and marksman. All of that goodness mixed with his mental instability makes for a character that is fried gold.

This mentally unstable anti-hero is just too fun of a character to not have his own movie. Anyways, here is Reynolds’ Deadpool tweet: 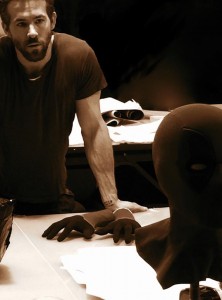 In case you missed it, here is the Deadpool test footage: