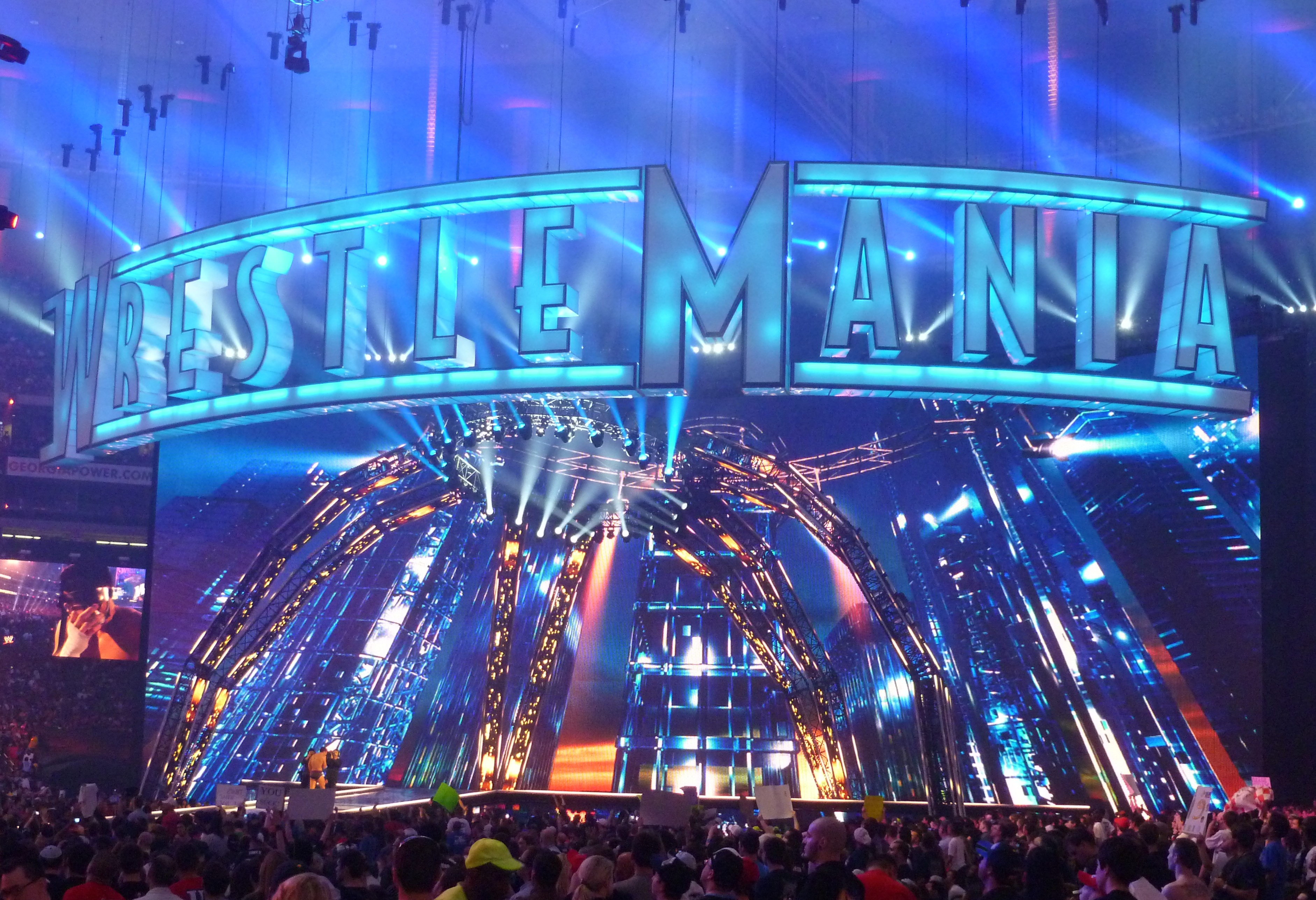 Rejoice, wrestling fans! It’s that one time of the year when the national spotlight is actually shined on this silly little “sport” we love so much. No, I’m not talking about when a wrestling legend from the 1980s dies or when The Rock premieres a new movie or when Brock Lesnar shows up at a UFC event … I’m talking about WrestleMania! The Granddaddy of them all! The Showcase of the Immortals!

The title of this column is “WrestleMania 31 Predictions,” but I won’t be picking the winners of each contest in the conventional fashion. I hope that doesn’t bum you out too much, but I need you to trust me; just because this is the biggest professional wrestling event of the year, it doesn’t necessarily make the outcome of each match all that much more important. What’s most important is how the show holds up down the line and where the WWE stands after the night is over. Remember, this silly little “sport” we love so much isn’t a sport in the traditional sense. Occasionally, who wins and who loses is crucial, but more often than not it’s how the game is played that really matters most.

This will be the final Andre The Giant Memorial Battle Royal

I had this one penciled into the column even before it got bumped from the main card to the pre-show. I defended the Andre The Giant Memorial Battle Royal in a WrestleMania predictions column last year, but man the “E” has made it really difficult for me to defend it this time around. I love battle royals more than the average fan and I’ll admit it, I’m probably more excited for this one than most of the WWE Universe is, but even a hastily thrown together battle royal on Smackdown feels like a bigger deal than this one does. With the right guys and the right build-up a WrestleMania battle royal can feel like a big deal. It did last year, but it doesn’t this year, and unless WWE makes it a priority to make this feel like a bigger deal for WrestleMania 32 it will either become a pre-show fixture or a thing of the past.

Triple H has a proven track record of being able to shake off the ring rust and put forth a high quality effort on big nights, but then again, Hunter isn’t the one to be concerned about if you were to have any doubts about the match. The build up to the match has been good, the entrances at Mania will certainly be spectacular and Triple H will do his part in the ring. The only question mark here is Sting, who recently turned 56 years old and hasn’t wrestled a match in over a year. Sting has gotten involved in a few physical altercations since his WWE debut at Survivor Series last November and it’s safe to say he hasn’t yet reached that depressing stage where wrestling legends can barely move but still try to get in the ring (if you need an example, just find YouTube clips of anything Hulk Hogan, Roddy Piper, Jimmy Snuka or Hacksaw Duggan have done in the last three years). In short bursts Sting looks like he can go, but how he holds up in a 20 minute match is still a mystery. I’ll bet on the Stinger stepping into the way back machine and putting on a good show for one night.

Sheamus will win the Intercontinental Title

This one originally read “Sheamus will win the Intercontinental Title or Andre The Giant Memorial Battle Royal” but the return of WWE’s red-headed step-child won’t be wasted on the pre-show. Sheamus always seems to be in extremely high regard backstage despite the fact that, A) his shtick has been worn out for three years, B) WWE fans haven’t responded to him in a positive way in that same time frame, C) he misses at least half of every calendar year due to an injury. Of course, this could all change is Sheamus returns as a heel and costs both Daniel Bryan and Dolph Ziggler, two of the WWE’s fan favorites, the Intercontinental Title. With a move like that legit heat will follow and WWE will have a genuinely detestable heel on their hands.

A bonus prediction: WWE’s writing team won’t realize this, and they’ll attempt to book Sheamus as a face after he wins the Intercontinental Title. It will fail miserably and they’ll have to readjust their plans in three weeks.

Not a prediction, just a fact.

Bray Wyatt’s push will be squashed

Hold on, let me try this again.

Tell me if this sounds familiar: Wyatt gets a big push on the Road to WrestleMania and then it’s all submarined because he’s forced to take a backseat to an already established superstar who doesn’t need the win at Mania. That’s what happened last year against John Cena, and it’s what will probably happen this year against The Undertaker, even though the best course of action would be for Wyatt to completely demolish The Undertaker, leading to a rematch/retirement match for The Deadman at WrestleMania 32, where he can then go over Wyatt as he rides into the sunset … or the underworld, wherever it is that The Undertaker would go.

Unfortunately, it would be a surprise if this was how it ended up playing out, because why would WWE book this the right way? They’ve botched Wyatt’s character build so many times over the last two years, but in true Undertaker fashion, Wyatt continues to rise from the dead and get better and better, always outshining whoever he’s working with and just about always putting them over in the process. Seriously, how good has Bray been building this match all on his own for the last month? The Undertaker’s mystique at WrestleMania was thought to be no longer after losing to Brock Lesnar last year, but Wyatt has once again made an Undertaker Mania match feel like a huge deal thanks to some pre-match psychology that will single-handedly make this match memorable even if it’s far from a five-star technical wrestling clinic.

Rusev will have more crowd support than John Cena

If there is one thing we know about WrestleMania crowds, it’s that they love to go the opposite direction of where WWE’s creative team wants them to go. As much as WWE has tried to play up the USA vs. Russia thing, smart WWE fans will look at this match not as an opportunity to show their patriotism, but rather a chance to support a young superstar who is really good at what he does while he is in a spot where he needs a win more than his opponent. Rusev getting the same treatment Bray Wyatt got last year should, and hopefully will piss people off. Cena doesn’t need to be the one to end Rusev’s undefeated streak. Someone like Roman Reigns or Dolph Ziggler or Dean Ambrose or Sami Zayn (NXT shoutout!) might need a win like that somewhere down the line. Smart fans will recognize this and make a stink about it if Cena once again goes over a young up-and-comer.

Even though the idea of cashing in the Money In The Bank briefcase is unpredictable in nature, doesn’t it feel just a little bit predictable if Rollins were to cash in after the main event? I’m not against the idea, I just don’t see it happening. There are however a ton of intriguing scenarios that could play out if Rollins attempts to cash in:

Scenario 1: Roman Reigns somehow manages to defeat Brock Lesnar, which leads to Seth Rollins making his way down to the ring and stealing the title away from a beaten down Reigns.

Scenario 2: Roman Reigns somehow manages to defeat Brock Lesnar, which leads to Seth Rollins making his way down to the ring, only a beaten down Reigns is able to fight Rollins off.

Scenario 3: Roman Reigns somehow manages to defeat Brock Lesnar, which leads to Seth Rollins making his way down to the ring, only The Authority turns on Rollins, assists Reigns in the victory, leading to a Rollins face-turn/Reigns heel-turn.

Scenario 4: Brock Lesnar defeats Roman Reigns, which leads to Rollins making his way down to the ring, and he defeats Lesnar for the title.

Scenario 5: Brock Lesnar defeats Roman Reigns, which leads to Rollins making his way down to the ring, and with assistance from Paul Heyman, he defeats Lesnar for the title.

Paul Heyman will not turn on Brock Lesnar

Scenario 5 isn’t happening. The Lesnar/Heyman partnership is way too valuable and a Heyman turn on Brock isn’t necessary for the rumored Brock Lesnar face-turn to occur. Don’t forget, Paul Heyman is more over with WWE fans than 90 percent of the roster is. He’s the manager of a super-heel who is actually going to be the crowd favorite in a main event match against a guy who is supposed to be the next huge babyface in the WWE, in part because of the WWE Universe’s reluctance to back Roman Reigns, but also because of Heyman’s way with words. Heyman is fantastic, and he makes Brock Lesnar a bigger deal than he would be otherwise, but this goes both ways. Remember how irrelevant Paul Heyman’s partnerships with Curtis Axel, Ryback and Cesaro felt? He needs Brock, too.

This is both a reflection of my thoughts on this years build up and my hopes for what is ahead of WWE in the next year. Rumors have it that WWE will be making a big push to break the attendance record at AT&T Stadium in Arlington, Texas next year by calling on a number of legends to make appearances and compete in matches, which usually corresponds to a bigger build towards Mania. That’s all fine and good, but WWE shouldn’t forget about all of the young talent that is just waiting to be utilized properly and put over by these legends and already established superstars. Once upon a time WWE won a certain “war” because they were creating young stars while a now defunct wrestling promotion relied on established names to carry the torch.