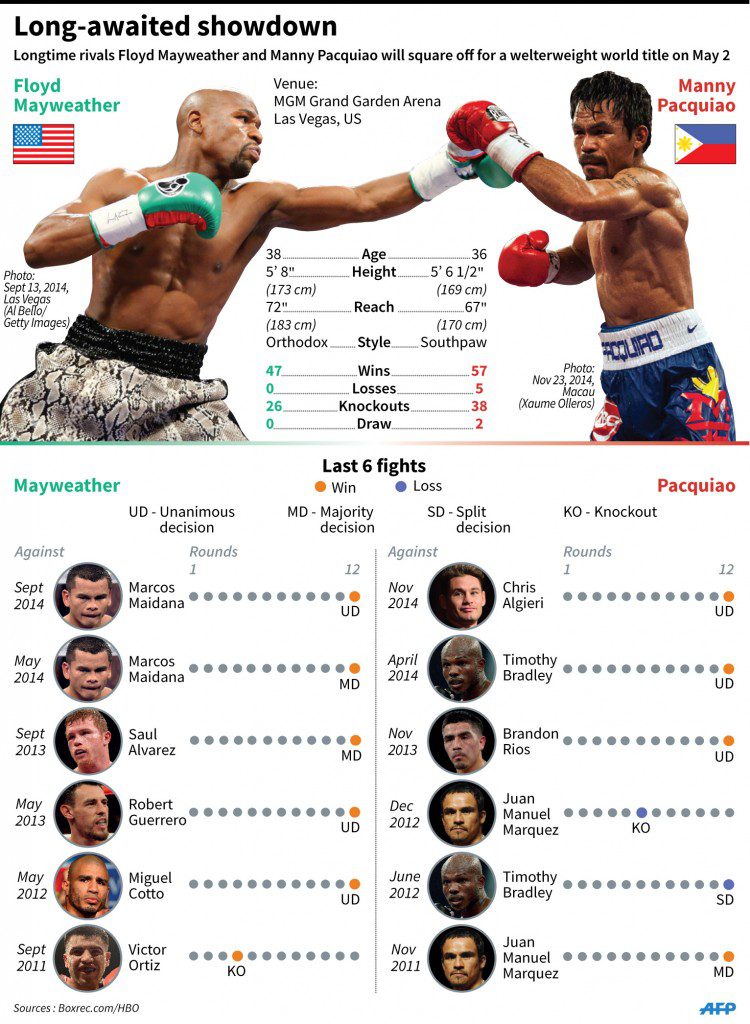 Floyd Mayweather Jr. versus Manny Pacquiao is the dream match the boxing world has been waiting for, and it’s right around the corner. Forget all the smack talk, mini-documentaries, and the variety of promos floating around. On May 2nd, Money May and Pacman will share the ring for the first time, and the truth will become evident, whatever it may be. Two future Hall of Fame boxers will clash in what will undeniably be the fight of the year, no matter how it turns out. All eyes will be on these two men, and every crushing blow will be telegraphed through the screen (unless you’ve miraculously managed to get tickets). So, the question is, who’s going to win? The defensive specialist or the fists of fury? Let’s break it down and share some predictions from a group of boxing enthusiasts:

Breakdown: This fight definitely won’t be a walk in the park for Mayweather, but it’s likely that he’ll prevail. It will take about 4-6 rounds for Mayweather to adjust to Pacquiao’s speed and awkward angles, but once he starts to get into his groove, he’ll be shooting that right hand down the center with accuracy. Even more so, since Pacquiao’s power straight left is his go-to, Mayweather can time his overhand right, especially because Manny tends to reach with his punches. He will most likely frustrate the offensive-minded Pacquiao who will eventually get sloppy and open up.

Pacman needs to swarm Mayweather to be successful, but eventually he’ll tire out and become cautious after catching Mayweather’s counter punches, quite possibly leading to flashbacks of his last fight against Juan Manuel Marquez. Even if Pacman catches Money, he’s proven to have a solid chin, as he’s eaten hard shots from Sugar Shane Mosley and Marcos Maidana. Also consider the fact that Pacquiao hasn’t gotten a knockout since 2009 against Miguel Cotto.

Breakdown: Manny Pacquiao will bring the fight to Mayweather in a competitive battle. With Pacquiao’s ability to land powerful left hands, Mayweather will have to be extra cautious. That’s why Mayweather is my pick, however, since his defensive game is always so cleanly played. Is a heavily offensive attack ever going to beat a fighter with the stamina and defense of Mayweather? I won’t believe it until my eyes witness it.

That said, I do see this fight going the distance for a couple of reasons. First, because Mayweather defines himself as a defensive fighter, it’s unlikely for Pacquiao to deliver on a crushing swing that end’s Mayweather’s undefeated run with one punch. On the flip side, even after Pacquiao tires due to his opponent’s rare endurance, Mayweather won’t aggressively open himself up enough to hunt for the knockout. As Pacquiao goes all out, Mayweather will carefully pick his spots.

This fight will be about Pacquiao’s power against Mayweather’s defense, and those missed punches might expose Pacquiao to Mayweather’s sharp counters. In the end, an undefeated fighter will enter the ring undefeated, and leave with his record in the same state.

Prediction: Pacquiao via majority decision after going the full dozen.

Breakdown: Just like my colleagues, I believe the fight will go the full tilt, and it won’t be a boring display of two fighters just dancing around the ring. As noted, Mayweather is a great defensive fighter and he’s very methodical, boxing with a surgeon’s precision. He’s undefeated for a reason and he always seems to be mentally sharp, emotionally devoid, and focused on getting that money.

Pacquiao, after his two 2012 losses to Bradley and Marquez, comes into this fight hungry. This fight is late in coming because Uncle Manny isn’t on top of his game; we know this, and more importantly, deep down inside, Pacquiao has to know this. If we’re honest, if Mayweather wins, that’s what most people figure will happen anyway… Manny is done, after all. But, if Manny wins, it would be one of the biggest sports moments this year, if not, this decade. Again, we know this, and more importantly, Pacquiao has to know this.

Manny will need to be conservative with any bursts and be patient to see what Mayweather gives up at any given moment. It’ll be a tough task, like shooting an arrow at a moving bullseye, but it’s possible. Get a few power punches in each round, maybe get one knockdown as gravy on the meat, and Pacquiao’s performance could stick out to the minds of the judges enough to make boxing history.