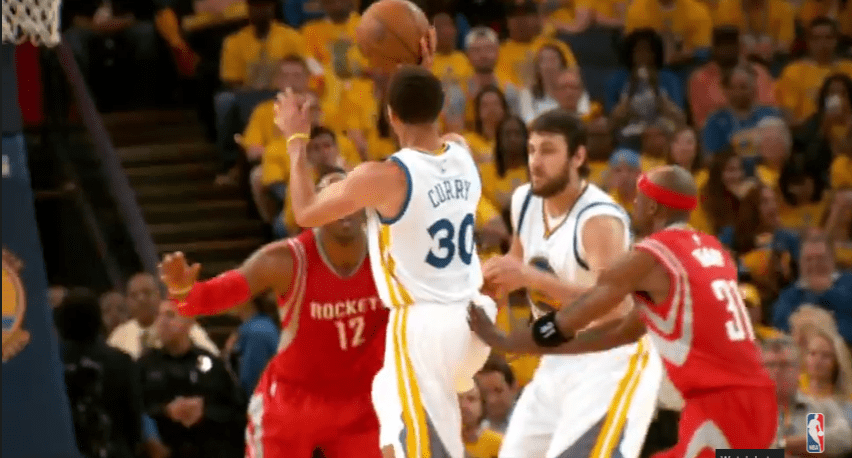 Game 1 of the West finals was a competitive, back-and-forth battle. The Golden State Warriors emerged on the winning end over the Houston Rockets, protecting home court by a 110-106 score. Stephen Curry dropped 34 points on 13-for-22 shooting. He banged six triples and only committed a single turnover. For Houston, MVP runner-up James Harden shined with 28 points, 11 boards, and nine dimes, coming just shy of a triple-double. Watching Curry and Harden take turns going bananas was joyous to witness.

Despite scoring 110 points in the win, the Warriors started Game 1 in a terrible manner. They appeared either unprepared or disinterested in competing. This allowed Houston to run up a 16-point second quarter lead, temporarily silencing a crowd that would explode later. Contributors for Houston included Trevor Ariza, who showcased consistent hustle during his 7-for-10 shooting, 20-point performance. Josh Smith had 17 points, but took 16 shots to get them. Dwight Howard was a non-factor as he struggled with injury issues. Houston simply didn’t have enough help aside from Harden and Ariza.

The Warriors wouldn’t have won this game without Shaun Livingston. Curry stole the show in the end, an aspect the crowd appreciated, but Livingston helped the Warriors tread water in the first half. He dropped 16 before halftime, masterfully pushing the tempo and carefully selecting when to post up. He went 6-for-8 from the field and made all six free throws. Draymond Green had another double-double, 13 points and 12 rebounds, while Harrison Barnes had 14 points. Klay Thompson had a forgettable 1-for-7 three-point shooting display.

Livingston wasn’t the only reason this game took a drastic turn. Steve Kerr opted to counter Houston’s 16-point lead with a small lineup, one that had Barnes and Green as Golden State’s biggest players. Green was repeatedly seen screaming in excitement or complaining to refs with relentlessness. No matter what Green does on a basketball floor, he does with commitment. This miniature lineup by NBA standards completely erased Andrew Bogut. The big man went scoreless in 16 points. Part of why he remained on the bench was because Howard only played in spots.

A fairly exhilarating Game 1 to watch left the audience with plenty of subplots to follow. For Houston, Howard has to join Harden as a fellow superstar. The Rockets won’t even sniff winning a game or two without Howard throwing down some 20-point, 15-rebound showings. His health will majorly impact Houston’s chances. They’ll also require role players such as Jason Terry and Corey Brewer to do more than combine for 16 points. On Golden State’s end, they probably won’t be able to afford another horrible start. The team is lucky Livingston and company saved them from slipping into the first half abyss.

Lastly, for Houston in particular, Harden was the recipient of intermittent whistles during Game 1. Some drives featured calls to the crowd’s dismay, other drives allowed contact to go uncalled. Six attempts isn’t a low number, but Houston likely needs him more in the 10-14 free-throw attempts range. A separate issue concerns more than Howard’s health, it’s his performance. His five turnovers and sloppy post play held Houston back. As always, his status will likely be enigmatic. In Game 2 and beyond, his production needs to be a certainty if health allows.