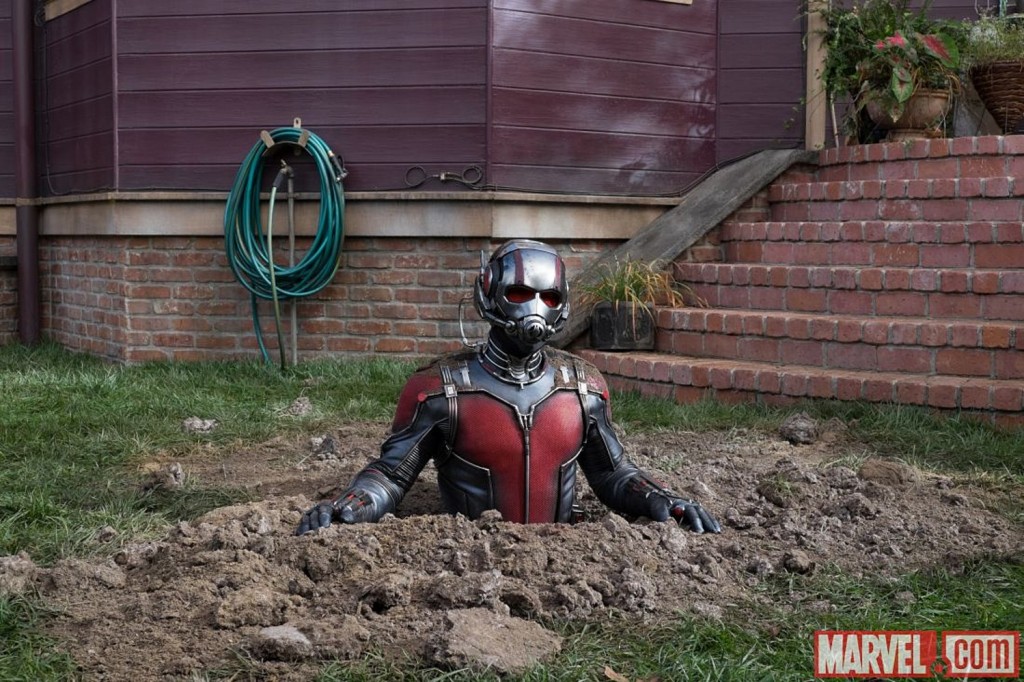 Everybody wants to be a hero for the one they love the most, and Scott Lang/ Ant-Man, is no different. The ever-changing story of redemption is always relevant and captivating because we find that our ability to “do good” is a marvelous power all on it’s own, despite everyone having the potential to do it. Of course, this flick wouldn’t be half as entertaining if it was an everyday man using everyday skills efficiently; Lang’s super powers consist of shrinking, talking to ants, and superhuman strength. Ant-Man totally sounds like the perfect fit for Edgar Wright, but the stars failed to align for him, and Peyton Reed was given the task to quarter back the job. Paul Rudd takes on the role of Ant-Man, joined by Michael Douglas as Hank Pym, and Evangeline Lilly as Hope to continue extending the Marvel cinematic universe.

Wright’s doctored script still has enough of his fingerprints on it that his humor still seeps through the edits of the other writers. Does it follow the typical origin story skeletal frame of other Marvel superhero movies? Unfortunately, it does; however it’s creative enough to be given some praise for at least injecting a new, quirky vibe into the format. Although, there are more than a handful of times where you’ll notice that the film badly wants to break free of the cookie-cutter, yet needs to mark off certain points on a checklist.

The action scenes are quite humorous and charmingly inventive, as we see Ant-Man work with his army of ants to fry circuits, fly into high-tech bases, and fight evil-doers on a dangerous Thomas the Train track. Lang’s ability to shrink and grow back on command makes for some entertaining fight scenes that actually feel fresh! There are even some psychedelic scenes that thrust Ant-Man into the quantum realm, making for somewhat of a homage to 2001: A Space Odyssey. Fingers crossed that they take him back there again to peruse the mysteries of the quantum realm.

As for the acting, most of the characters were at least entertaining. Paul Rudd was humorously charming and heroic in the role, giving us a superhero we’ve never quite experienced before. He projects Scott Lang as a truly regular Joe, making him a very relative character. Not only is Rudd’s comedic timing spot-on, but his dramatic scenes are handled very well. We feel for him as a man trying to find redemption, as well as one that is inspired by his daughter to be the hero she already thinks he is.

Michael Douglas provides his tried and true talents to the role of Hank Pym, a genius inventor and the original Ant-Man, that’s haunted by the death of his wife. His daughter, Hope, played by Evangeline Lilly, is a live wire with resentment for her dad shutting her out of the big picture. They bring solid performances to the table, but mostly chill in the shade of Paul Rudd, as well as Michael Pena, who plays Louis: Scott Lang’s very energetic, long-time friend. Then there’s the main villain: Yellow Jacket/ Darren Cross, played by Corey Stoll. Think of a variation of Jeff Bridges as Obadiah Stane. Stoll just doesn’t have enough to work with besides the typical aspects of a Marvel film villain. If Darren Cross let out a cliche evil “muahahaha” laughter, it would’ve felt at place.

Ant-Man is an entertaining comic book flick that almost breaks the chain, but never had the intent to actually do so. Despite the re-writes, the film has survived to be something of a breath of fresh air, especially when compared to the typical Marvel movie origin story. It’s also a gem that reminds us that we have the power to choose to be the hero.