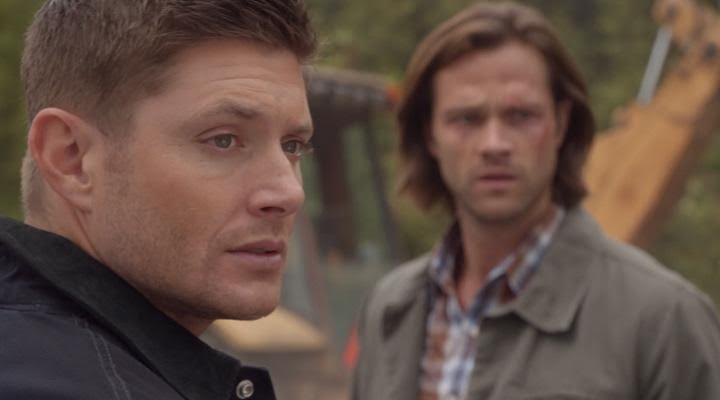 It’s October again everybody, and that means the start of a brand new season of Supernatural. There aren’t too many people out there that are more excited about this than me, as I have been following the not so merry-misadventures of the Winchester brothers since the beginning.

Season 11 picks up where the last one left off. Sam and Dean are being engulfed by The Darkness which was recently set free by their poor decision making. Whenever it comes down to choosing between saving billions of lives, or saving each other, it’s easy to guess what Sam and Dean will do. This loyalty to one another is what keeps the show going, so it’s hard to complain about it too much.

Dean has an interesting exchange with a woman inside The Darkness while Sam is passed out in the Impala. We are led to believe that this woman is the physical manifestation of The Darkness, and apparently our new villain for this season. I have an early theory that rather than being The Darkness, this woman is actually God. I’m a big fan of trying to guess surprises like this early on, so it really is just a shot in the dark (No pun intended).

We’ve been told that God has been missing for quite a long time, and it seems like it’s about time he/she makes an appearance. My theory took a bit of a hit when the woman revealed her mark of Cain that matches the one Dean had, but hey, I’m going to stick to my guns and see what happens!

Regardless of whether or not the woman is God, The Darkness being released is nothing but bad news. Sam and Dean quickly realize this when they get into town and are attacked by the new type of monster that has been created by The Darkness. It has infected people and turned them into “Rabids” as Sam put it.

These Rabids are essentially zombies that are a little better at thinking for themselves. They don’t seem to have any motive as of yet, and they die relatively soon after being infected. It’s a questionable tactic for Supernatural to jump on the whole zombie bandwagon, but I trust the writers and feel like there will be a little more to these monsters than appears at first sight.

While Sam and Dean are busy fighting the Rabids, Castiel is fighting his own battle with the sickness or whatever it is that Rowena has cursed him with. He even gets desperate enough to call on help from fellow Angels, even though this may lead to him being taken back to Heaven to await a punishment for all of his actions in the past. Well the angels do come, however, rather than take Castiel to Heaven they chain him up and apparently have other plans.

The Rabids are proving pretty difficult to deal with, and Dean’s plan is to just kill them all and get out of danger as quickly as possible. Sam doesn’t think this is the best course of action as there might be a cure for the infection. Sam actually has a brilliant realization that comes about four or five seasons too late. He realizes that they put the safety of each other first, rather than that of those around them, entirely too often. Dean reluctantly agrees and they decide Sam will be a distraction and lead the Rabids away while Dean escapes with their new cop friend, and a baby they promised to protect.

That is all worth mentioning because what I’m assuming will be serious plot points for the rest of the season come from these scenes. First, while leading the Rabids away from Dean, Sam goes and gets himself infected with whatever it is that they have gotten from The Darkness. It’s only been one episode and Sam has already put himself in mortal danger that they will have to try and fix. This might be a new record for him, way to go buddy.

The next point is that the out of nowhere baby they promised a random guy they would protect for him just so happens to have the mark of Cain. The exact same mark of Cain that the woman from The Darkness has. This was the big twist at the end of the episode, and it definitely wasn’t something I saw coming. Dean left the baby with their new cop friend and no one noticed the mark, so it will definitely be interesting to see how that plays out the rest of this season of Supernatural.

The debut had its ups and downs, but overall I’m excited to see where they are going to go with the rest of the season. I hope they don’t stick with the zombie-like new monsters for long as this has already been done by so many shows before. The Darkness proves to be a mysterious new challenge for the Winchester brothers, but I have no doubt they will find some way to overcome it, even at the expense of the human civilization.