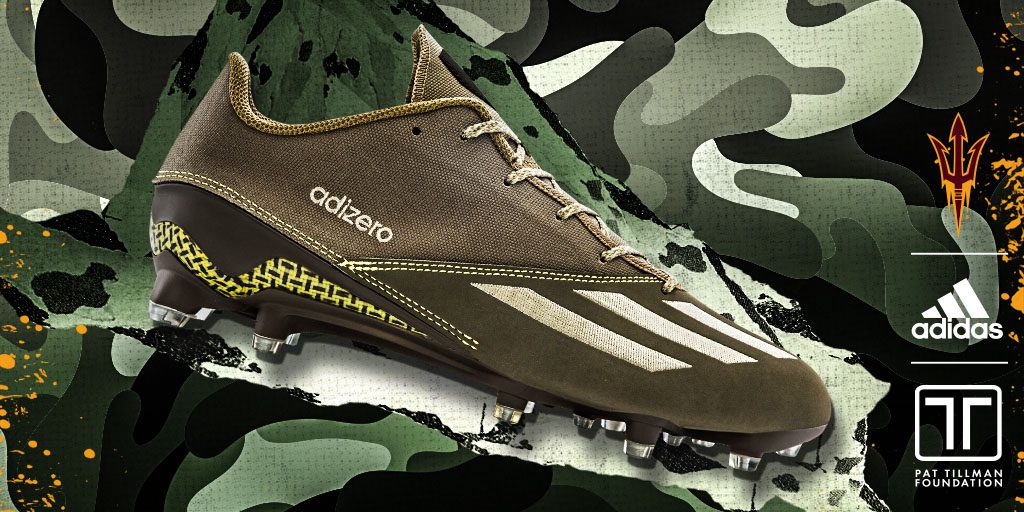 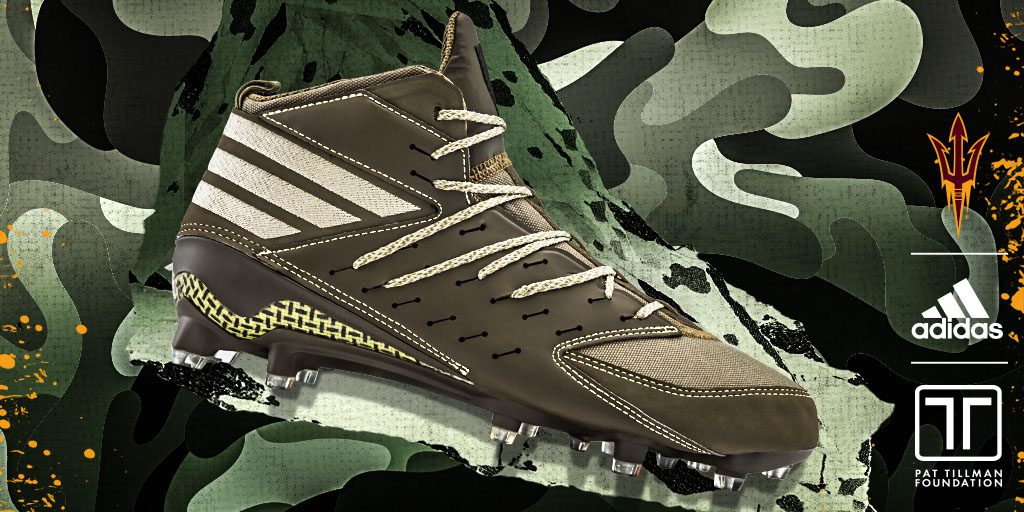 Pat Tillman may be the most hallowed citizen-athlete that the United States has known since the Vietnam War. A former NFL star player, Tillman left the NFL during his prime to serve in the United States military in the Iraq & Afghanistan Wars. He was tragically killed by friendly fire in a high-combat mission in Afghanistan, but still, Tillman’s memory has been preserved. Now, his alma mater’s football team, the Arizona State Sun Devils, and adidas, have debuted the Dark Ops Collection, serving as an equipment reminder of Tillman’s football and military career.

See all of the Dark Ops Collection here, courtesy of our friends at adidas.

To honor the nation’s active duty members and veterans, Arizona State University will debut the first pack to release in the Dark Ops collection on Thursday, October 29th when the Sun Devils take on the Oregon Ducks at Sun Devil Stadium – this marks the kick off of ASU’s annual week-long ‘Salute to Service’ initiative. Inspired by the U.S. Army Rangers and Pat Tillman, the first pack incorporates the green, tan and black colors of U.S. Army uniforms.

In 2002, Pat Tillman, an Arizona State University alumni and safety for the Arizona Cardinals, proudly put his professional football career on hold to enlist in the U.S. Army with his brother. In April 2004, Pat lost his life while serving with the 75th Ranger Regiment in eastern Afghanistan. Paying homage to Pat and the Pat Tillman Foundation, the PT-42 badge logo is prominently placed on the top of the tongue of these special edition cleats. Additional detailing includes a camouflage sock liner with gold adidas Football logo, representing the gold outline of the U.S Army Rangers patch and U.S. flag patch. 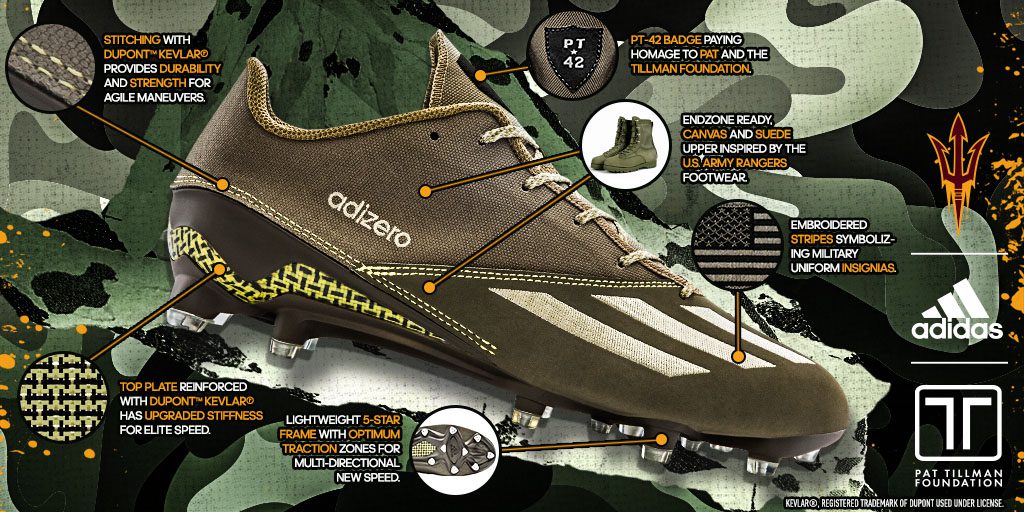 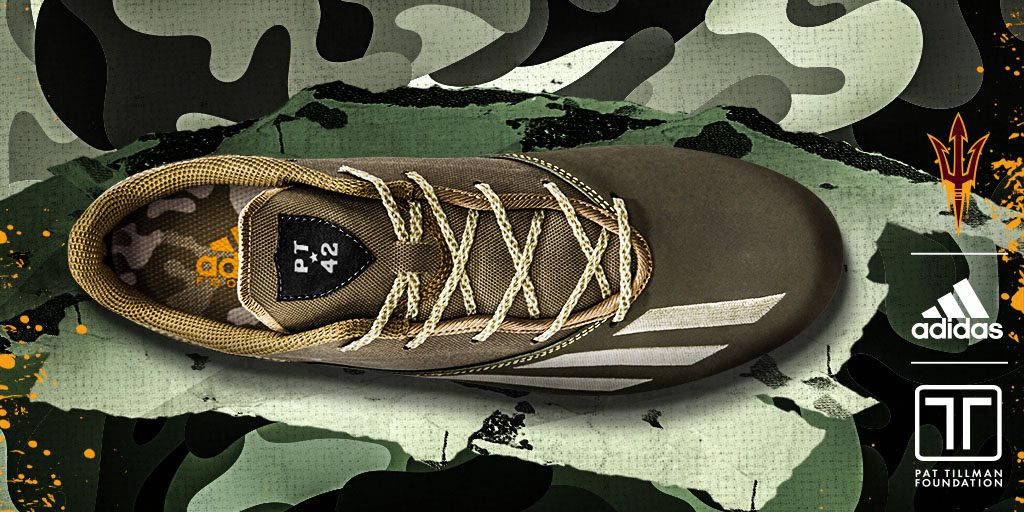 Engineered for playmakers, designed to showcase style. The lightweight Dark Ops 2016 adizero 5-Star 5.0 upper is constructed from a durable, flexible canvas – similar to military accessories and footwear. Embroidered stripes pay tribute to the insignia found on elite forces uniforms, and stitching reinforced with KEVLAR® provides durability and strength. The 5-STAR FRAME, featuring a plate reinforced with KEVLAR®, is the optimum blend of lightweight, strength and traction. This cleat has a unique lacing system, a 5-Star Frame for optimum traction and is reinforced with the legendary strength of DuPont™ KEVLAR®. 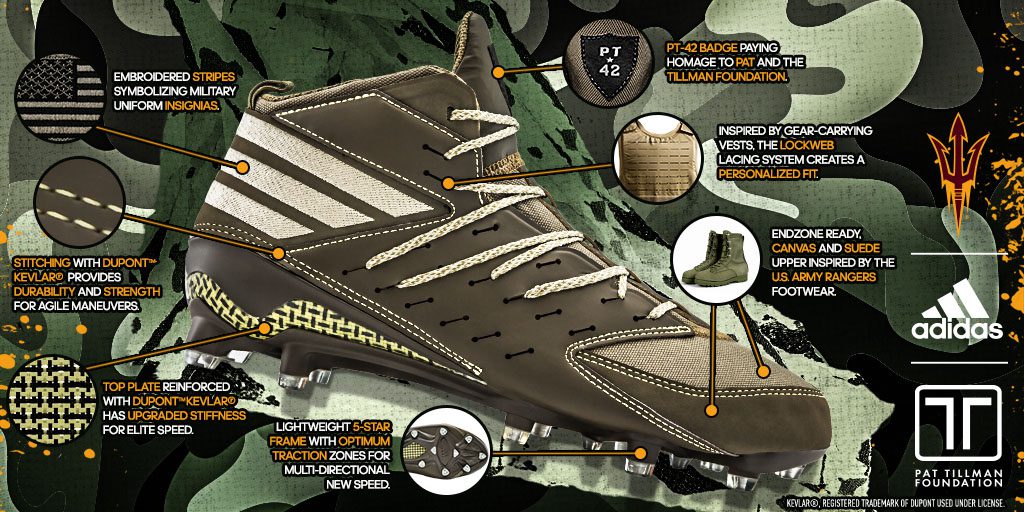 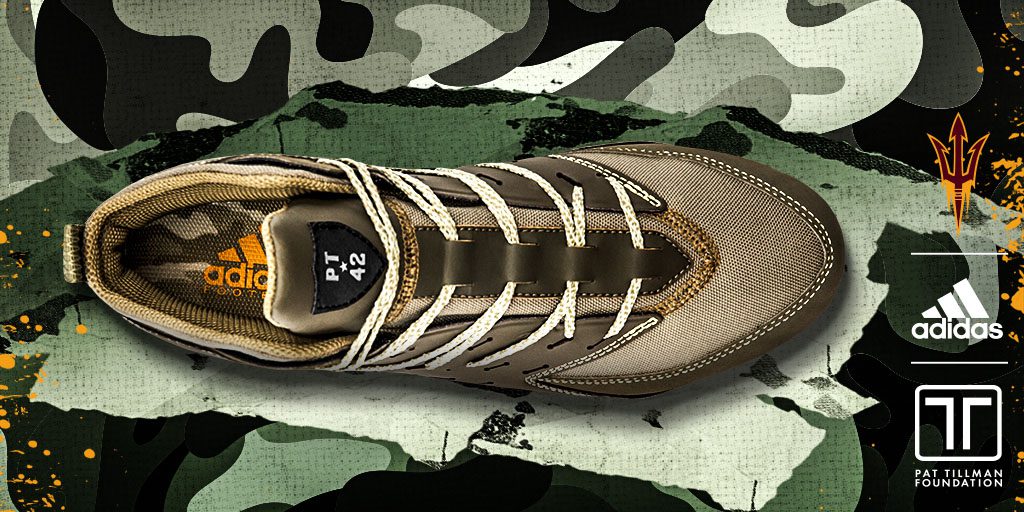 Stronger than carbon, faster than the competition. The Dark Ops 2016 Freak x KEVLAR® is constructed from a durable, flexible canvas – similar to military accessories and footwear. Inspired by the gear-carrying vests worn by elite forces of the U.S. military, the lockweb midfoot features a tunable lacing system to tailor the fit and performance of the cleat. Embroidered stripes pay tribute to the insignia found military uniforms, and stitching reinforced with KEVLAR® provides durability and strength. The 5-STAR FRAME, featuring a plate reinforced with KEVLAR®, is the optimum blend of lightweight, strength and traction.