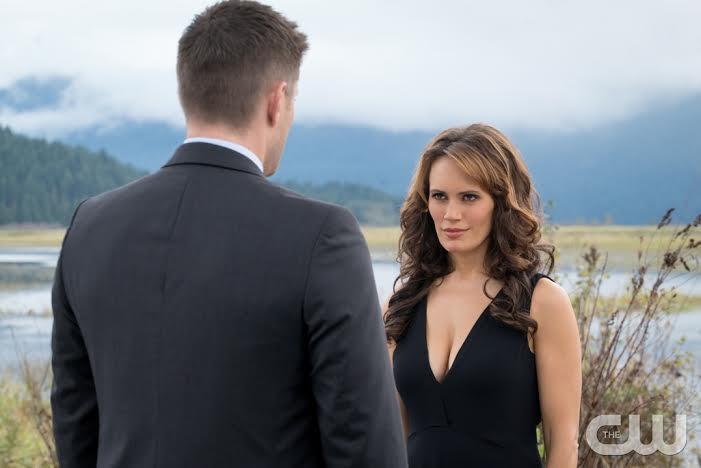 Supernatural followed the lead of many other shows this week and aired its mid-season finale. I may be biased, and I haven’t seen many of the others, but I can safely say that Supernatural had the best finale by far (yes, even better than The Walking Dead, which I also review). This season is really finding its stride, and I’m upset it’s going on hiatus for a period.

They have finally found that perfect balance between monster of the week style episodes, and ones that focus on moving the story. I’ve been loving the last couple of episodes that have been more fun and humorous, but they switched it back to pure story for the mid-season finale and the timing was impeccable. This season is going to end up being one of the show’s best if they keep this succesful balance going the rest of the way through.

What this episode of Supernatural solidifies is that Amara is all grown up, and now a certified bad-ass. Yes, she’s also evil, but that doesn’t take away from the fact that she is now one of my favorite characters. She can call lightning storms at will to strike people down, and can turn angels to dust with the wave of her hand. She is turning out to be one of the deepest and strongest villains the Winchesters have ever faced.

I hope they don’t beat her in some anti-climactic way like the last couple baddies they went up against. Amara deserves a great storyline to match the quality of her character. As long as they do it the right way, I don’t see why they can’t make her last a couple of seasons. They did it with Yellow-eyes, so why not her? Supernatural is always desperate for the right bad guys for Sam and Dean to contend with, so why not keep a great one around for as long as possible?

One thing that may keep Amara around a little longer is that Dean seems to have a bit of a thing for her, or at least she has a thing for him and he’s having trouble resisting. Can’t blame him for that in the slightest, though. They have a bit of a make out session, which clearly leaves Dean confused. He doesn’t get much time to think about it, though, because Amara then massacres some angels and then makes Dean disappear before she is smited for her actions. It was implied that this collective angel power would be enough to kill Amara, but I’m going to assume even though they left us guessing, she is perfectly fine. She’s just going to be pissed off at all the angels now, and that’s bad news for them.

While Dean is busy getting it on with God’s sister, Sam is hanging out with Crowley and Rowena who have found a way to get Sam into Hell to have a pow-wow with Lucifer. This is clearly a bad idea, but Sam is under the impression that God wants him to do this to find a way to stop Amara. Hell as a setting is super ominous, and Lucifer is just as creepy as he was in previous seasons. The talk between Sam and Lucifer has some solid writing and is definitely one of the more dramatic scenes we’ve had from the show in a while. There’s some awesome music playing while they are in Hell that really sets the dark, epic mood they were going for in the scene.

We quickly re-learn that Rowena is not to be trusted, as something she does puts Sam into the cage with Lucifer, who wants to use Sam as a vessel again. We also learn that, SURPRISE, it wasn’t God sending Sam visions, but Lucifer himself. One of my favorite parts of this scene is after Sam learns this information, he sheds a single tear in response. It shows just how disappointed he is in his misplaced faith and just how wrong everything is going. Props to Jared Paladecki for absolutely nailing the acting in the scene with Lucifer.

Lucifer being back is a great addition to this season, and adds some serious drama and danger for the Winchesters that has been lacking of late. If Sam says yes to being Lucifer’s vessel, or he gets topside in any way, this season is going to get crazier than it already is. It is still yet to be seen f Michael is going to come into play at all, but my guess is probably not. They’ve already got enough going on with Dean, throwing Michael into the mix might just make things confusing.

This was one of my favorite Supernatural episodes in about three seasons, and I can’t stress enough how fantastic it was. Just how great this episode was is quantifiable by the amount of times I said “holy shit” out loud while watching it. My buddy, Jeremiah, probably had the best way to sum up this episode, however, when he promptly texted me “OH MY GOD” when it was over. Season 11 of Supernatural is going in the right direction, and I’m pumped to see what the writers have in store for us after the mid-season break.