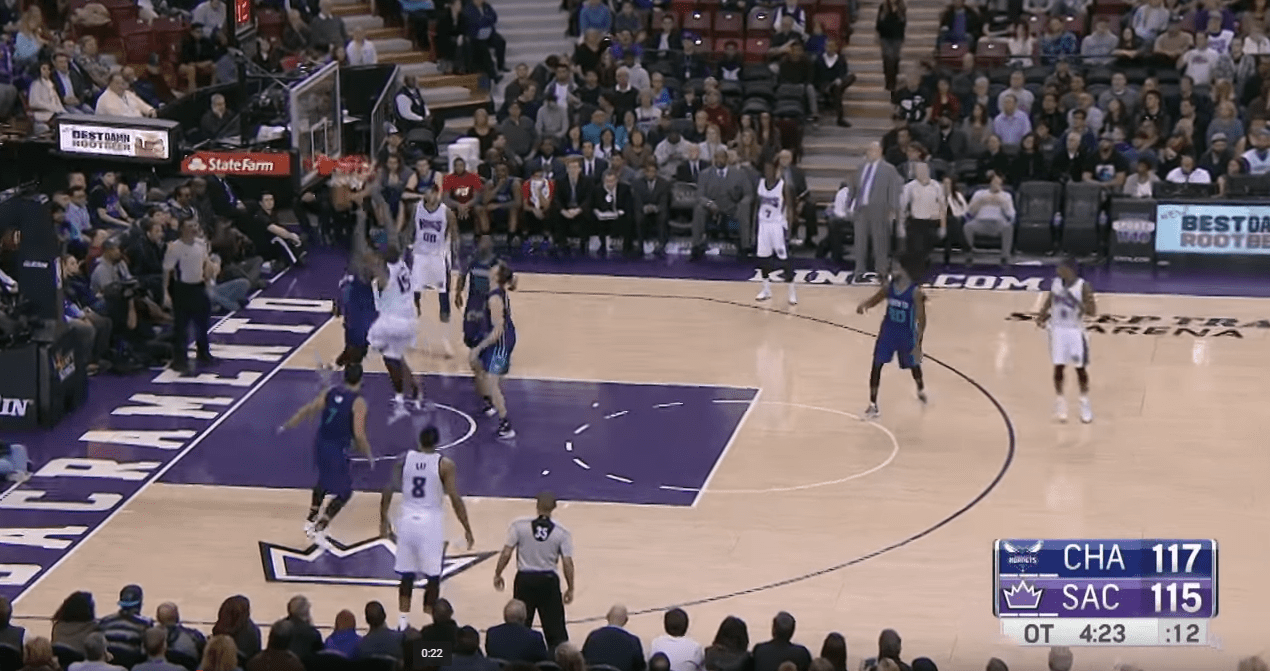 The last time that the Sacramento Kings won six games in a row was January of 2007. As it stands, that will remain as the precedent of win-streaks for the remainder of Sacramento’s season. Falling just shy of a double-overtime victory the Kings slipped late to the Charlotte Hornets 129-128 behind a final three-pointer from Troy Daniels.

Heartbroken, deflated, defeated the Sacramento locker room was rather dull. The players of the team weren’t as much sullen as they were disappointed in squandering any opportunity to differentiate their win-loss record and get closer to a .500 winning percentage and further away from Portland and Utah.

While there are is an eery amount of similarities between the Kings matchup with Charlotte tonight and their game in mid-November, the Kings have come a long way since then. In their November matchup, Cousins was then player of the week, the Kings blew a late lead, and Sacramento ended up losing in overtime. Sound familiar? If it doesn’t keep reading.

Tonight, DeMarcus Cousins did everything humanly possible in order to have his team prevail. Cousins scored a franchise-high 56 points for the Sacramento Kings on 70 percent from the floor. The big-man was so dominate that Spencer Hawes, Tyler Hansbrough, and Marvin Williams all fouled out throughout the duration of the game and overtime. Shooting threes, facing up defenders with the dribble, and scoring from either block Cousins is playing some of the most beautiful basketball fans have seen from a big.

It was an exciting game at Sleep Train Arena. Sacramento jumped out to an early 31-16 lead over Charlotte. In Rudy Gay’s first game back from a heel contusion, the forward scored eight of his 20 in the first quarter. Including a variety of showtime dunks and alley-oops, including this lob to shooting guard, Ben McLemore.

The Kings were rolling early and were able to maintain a double-digit lead heading into half-time. Charlotte was slowly cutting the deficit down as the Kings bench struggled to find any consistent rhythm. Without a creator, Sacramento was outscored by five in the second and Jeremy Lin scored 11 of his 20 in the second. Lin finished with a double-double as he also tallied 11 assists in 50 minutes of play.

The third quarter is what made the difference for the Hornets. Scoring nine three-pointers, the Kings fell behind by as much as seven, as Charlotte outscored Sacramento 42-28.

Both teams exchanged blows until the final four minutes of regulation. Sacramento went on a 16-8 run, capped off by a missed game-winning free-throw from Kemba Walker.

To start the first overtime, Cousins took matters into his own hands. Scoring every basket of the extra five-minute period, Cousins was not denied from anywhere on the court. Rondo was extremely involved in the playmaking and finished with 20 assists on the night. 14 of those came on Cousins 21 made field goals. 67 percent. Rondo had his 30th game with 10+ assists and tied Sacramento-era records of most games with 10+ assists in a season.

Charlotte was able to match Boogie shot for shot and forced the second overtime which eventually sealed the game. On an offensive rebound, DeMarcus Cousins questionably (didn’t) picked up his sixth foul and was sent to the bench with 56 points. Sacramento was only able to score two points after the substitution on a dunk from the rookie, Willie Cauley-Stein that put Sacramento ahead by two with eleven seconds remaining. Focusing primarily on Kemba Walker, Troy Daniels took the inbounds pass and hit what would be a game-winning three-pointer. The Kings still had time to retaliate but weren’t able to capitalize on a broken offensive play, ultimately costing them the game.

To remind you, DeMarcus Cousins has already been named the Player of the Week this week, the Kings gave up a lead in the last 11 seconds of overtime, and eventually lost in extended time. The exact same outcome as the game played in Charlotte.

Ending Sacramento’s five-game winning streak, the Hornets will take on the Jazz in Utah on Wednesday. Tonight, Kemba Walker scored 24 for the Hornets, Marvin Williams had 21 points and Spencer Hawes scored a season-high 18 and fouled out late in regulation.

The Kings are on the verge of a back-to-back and are playing Portland on Tuesday night. Rudy Gay finished tonight with 20 points, Darren Collison had 15, and Omri Casspi finished with 13. 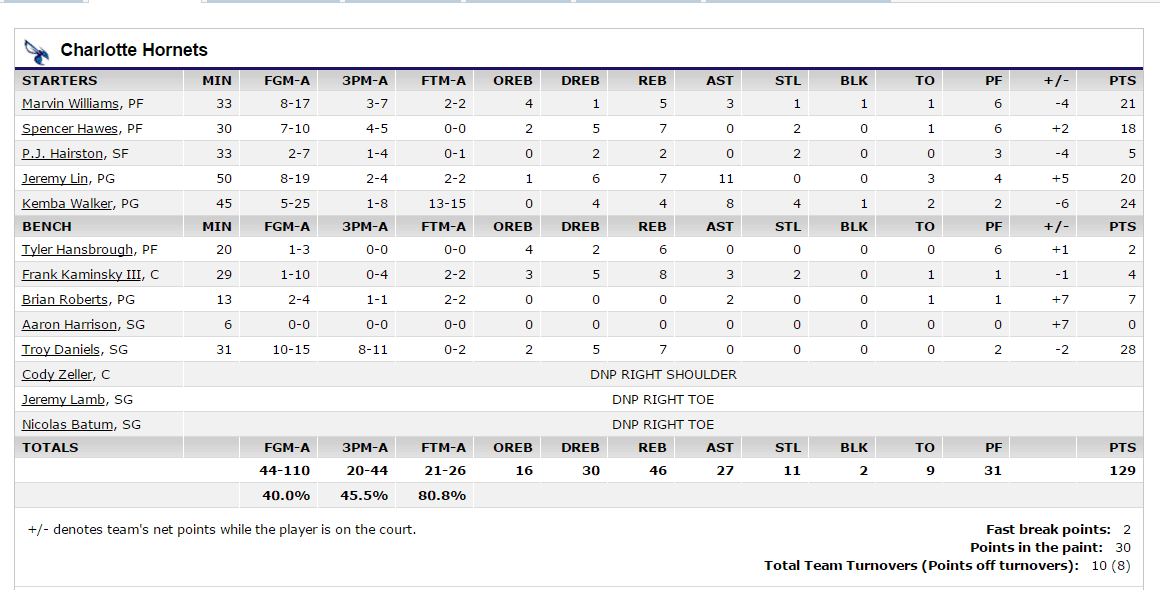 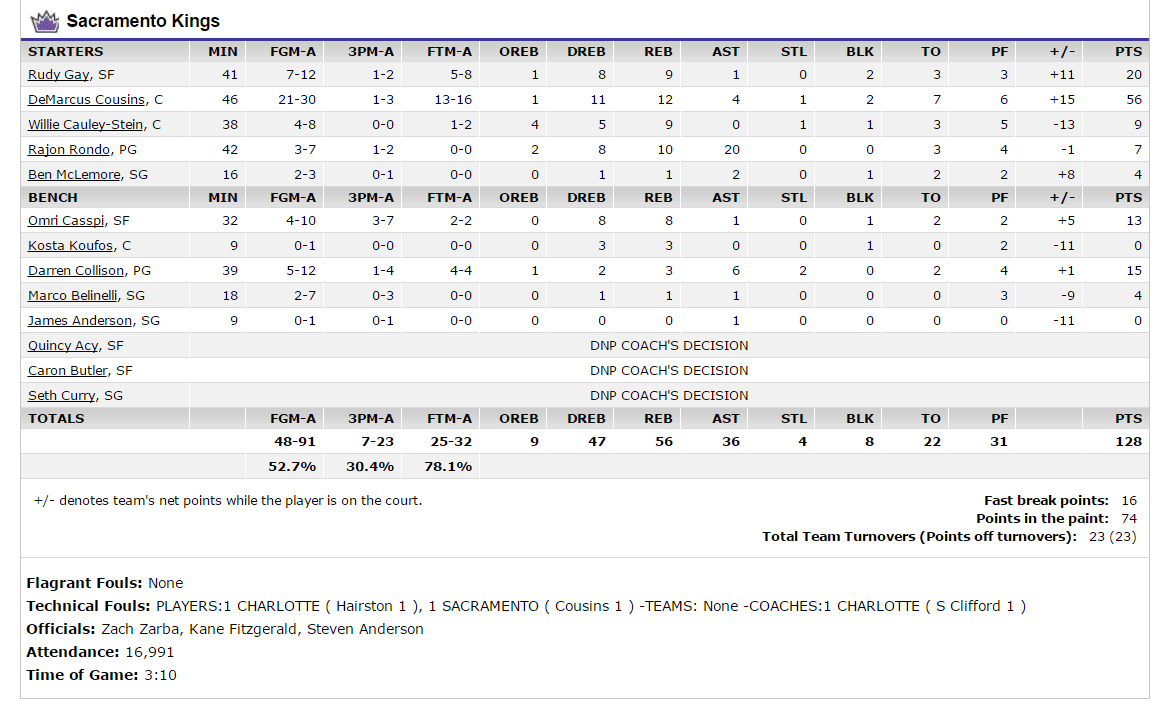