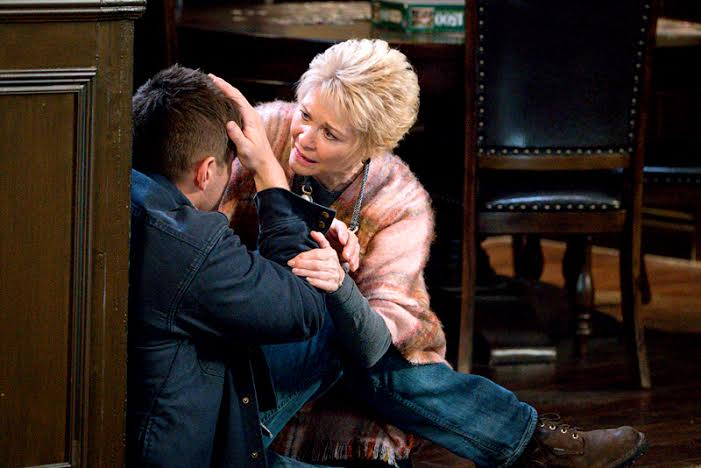 You know how when you’re writing you need a really catchy or interesting introduction sentence to draw the reader in and solidify their attention to the rest of your piece? (See what I did there?) Well, Supernatural always has a fantastic opening to its episodes, and this week is no different. We see a nice Irish family get terrorized by what I can only imagine a female Dementor would look like. We later learn that she is a Banshee, which I totally guessed. They were in Ireland and there was loud screaming so I assume everybody probably guessed what she was as well, but hey, I like to toot my own horn. The visual effects in this opening scene are awesome, and the Banshee is actually pretty terrifying.

This episode of Supernatural gives us a healthy mix of over-arching story, and a monster of the week style story-line. Castiel/Lucifer is on the loose and it’s anybody’s guess what his immediate plans are. I definitely need a more clever way to identify him. Luctiel? Lucicas? Casifer? I’m going to go with Casifer from here on out. We quickly learn that Casifer is not a fan of Angels when in his first run in with one he snaps his fingers and turns him into meat mist. This showcases not only how powerful Casifer is, but also just how recklessly violent he can be as well.

Whether or not he’ll be able to defeat Amara is yet to be seen, but either way Sam and Dean will have their hands full. Casifer actually has a run in with Dean in the Bunker, and although Casifer plays his part well, Dean still sensed that there is something off about him. That begs the question of how long it will take Sam and Dean to realize what has happened to their best angel buddy? My guess is it will only be a couple of episodes at most before Sam and Dean figure out that Castiel is now in fact Casifer.

I’ve mentioned this before, but Supernatural always introduces us to great supporting characters, and this episode sticks to that theme as well. We get Eileen, who is the baby from the opening scene, all grown up now. She is deaf from her run in with the Banshee, and relates heavily to Sam as both of them lost parents as babies and got into hunting strictly for revenge. Also, she is a Men of Letters legacy just like the Winchesters. Eileen is one of the most interesting and deep supporting characters Supernatural has given us in quite some time, and I hope she makes a return in the future.

The other supporting character we get in this episode of Supernatural is Mildred and she is just fantastic. The easiest way to describe her is a cougar, as she is VERY interested in getting to know Dean. However, there is more to her than just her cougerness as she tells Dean that he needs to stop and smell the roses every once and awhile, which is advice that Dean desperately needs. She also senses that Dean has another woman on his mind. We know that this is Amara because Dean himself says earlier in the episode to Casifer that he doesn’t know if he can resist his attraction to her. It will be interesting to see how that relationship will pan out the remainder of the season.

Although this episode of Supernatural didn’t do too much to advance the main story-line, it definitely laid down ground work for some great episodes in the future. There are a multitude of questions that will have to be answered in the coming weeks, and it is going to lead to some serious drama for Sam and Dean. I’m always a sucker for the monster of the week style episodes, so I like this one more than some other people probably will, and that’s okay. Season 11 of Supernatural is still one of the best seasons in years and I know they will keep going strong.