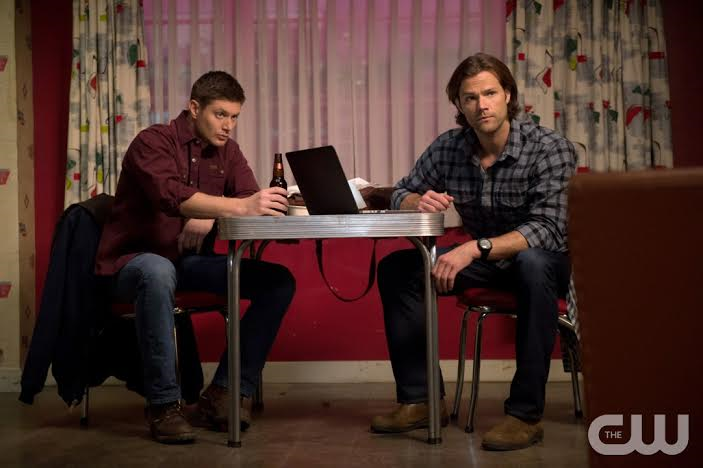 This week’s episode of Supernatural celebrated a very special event that occurs on February 14th. Unfortunately it was just Valentine’s day, and not the return of The Walking Dead. Can you imagine how great a crossover episode would be, though? Sam and Dean probably wouldn’t last long in that universe, however. Rick would shoot them both after about five minutes of their bickering.

As with all of the Supernatural holiday themed episodes, this one was fun and managed to keep the perfect mix of humor and action without getting too cheesy. The Valentine’s day themed episode has Sam and Dean dealing with a kissing curse created by a vindictive witch. She was apparently not a fan of adulterous husbands or the women who keep going back to them. The curse is passed from person to person by kiss, much like a “magic STD” as Dean so eloquently describes it.

This episode actually has a great red herring moment, as we are led to believe the Winchesters are dealing with another Shapeshifter, when in fact it was a new monster to the brothers called a “Qareen.” This Qareen could actually be a pretty fantastic Mortal Kombat character with its fatality being the ability to punch through someone’s chest and rip their heart out, which we see multiple times in this episode. I was half expecting to hear “Finish Him!” every time before someone was killed. We also see the Qareen punch through about five different walls, so it’s clear this monster could give Ivan Drago a run for his money.

I’d actually like to take a moment to celebrate a couple of the great puns that this episode of Supernatural so graciously provided us with. The first was the motel the Winchesters stayed at which was called the “Too Tired Motel.” The second was the witch’s salon which was called “The Art of Dyeing.” HA! Get it? She kills people and dyes hair for a living! Sorry.. I really enjoy a good pun.

The whole point of the Qareen in this episode of Supernatural was that it presented itself as its victim’s “deepest, darkest, desire.” It was no surprise that when the Qareen was focused on Dean it looked like Amara. We already know that Dean has some restraint and self-control issues when it comes to God’s sister, but now we know for sure that this relationship is going to cause issues in the future. It’s not easy to kill your deepest desire, and Dean says as much when he tells Sam that he doesn’t know if he’ll be able to finish her off when the time comes.

This scene at the end with Sam and Dean was actually one of my favorites between the two in a long time. For once Dean was just straight up honest with Sam when he told him that the Qareen presented itself as Amara. Sam wasn’t surprised by this and they had a great moment of mutual honesty and sharing. It gets a bit annoying when they are always hiding things from each other, and this was a nice change of pace.

Supernatural is definitely setting up something big for the future with Dean and Amara and I’m excited to see where they go with it. I’m sure it will be something along the lines of Sam or Casifer having the opportunity to kill her at some point and Dean stopping it from happening. That would be the Winchester thing to do. I hope they do something a little more original and surprising than that, but we’ll just have to see. Also, speaking of Casifer, we haven’t seen anything of him in quite some time and I’m really curious what he’s up to. He’s a great character already and I hope the writers put him to good use the remainder of the season.