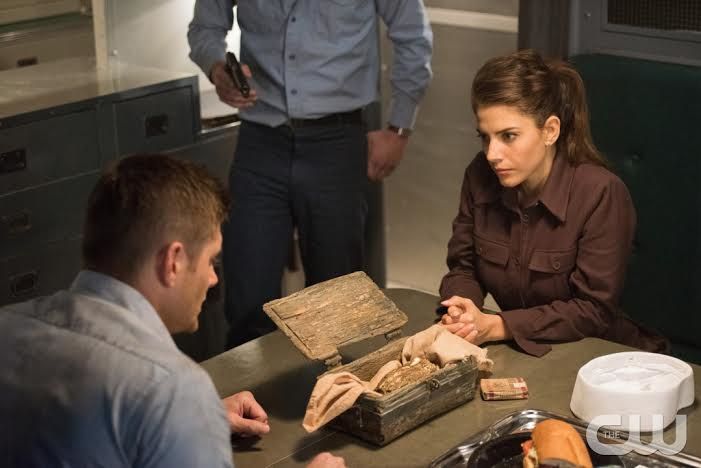 Supernatural took us for a bit of a ride this week with its first episode to feature time travel since, well, last season. I’m the last person you’ll hear complaining about this, though, because I’m a huge sucker for a good time travel episode. A testament to this is how much I love the show Quantum Leap. If you don’t know what Quantum Leap is you need to quickly finish reading this review and then go binge watch all five seasons on Netflix.

Aside from playing to my love of time travel, this episode of Supernatural had a lot that made it great to watch. Anytime we get a glimpse into the Men of Letters at its peak is a treat, especially when the setting is Nazi Germany and WWII. I would actually love a Supernatural spin-off centered around the early years of the Men of Letters. Hell, I’ll even write that series, someone just needs to convince the CW to let me do it.

In this episode Dean has to go back in time to retrieve a lost artifact called the “Hand of God” that they believe can be used as a weapon against Amara.  The only real problem here is that they decide to call on Castiel for help. Obviously they still aren’t aware that Castiel is now Casifer, and inviting him into the bunker is surely a bad idea.

What is terrible for Sam and Dean is actually great for us, because we get to see more Casifer on screen. He is a fantastic character and Misha Collins is playing him to perfection. Lucifer was already great, but pairing that character with Misha Collins as his vessel was genius on the part of the writers.

Another great performance from this episode of Supernatural was that of Weronika Rosati who portrayed Delphine, the Woman of Letters Dean goes back in time to assist. She is a great actress and really shines in her role as one of the few woman of letters in the world. I’d keep an eye out for her because I’m sure she’ll be a big name in no time.

This episode of Supernatural had a great story that really tugged at the heartstrings in a big way. Dean’s sadness at not being able to save the crew of the US submarine was a nice touch to the ending. There are also some unanswered questions that stem from this story line as well. First off we aren’t sure if Delphine is dead or may come back as some God-power wielding character later on in the season. I doubt it, but I’d like to see Weronika Rosati again, so a guy can hope. Another question is whether or not there are more God artifacts or other pieces of the Ark of the Covenant out there that Sam and Dean could use to destroy Amara. I’m sure that there are, and I’m sure that the Winchesters will be able to find them.

Perhaps the most important thing to come out of this episode of Supernatural was that Sam and Dean are now both fully aware that Castiel is Lucifer’s vessel. This obviously came as quite the shock to both of them, but Sam is taking it much better than Dean. Sam accepts that Castiel made the choice to be a vessel to Lucifer, but Dean doesn’t seem to be able to. Now they have two enemies to worry, so it will be interesting to see who they decide will be the more important use of their monster slaying time.

Supernatural did what it is best at and turned what could have been a very gimmicky story into some great television that was fun to watch. It was definitely a step up from the last couple of episodes, and set up what will surely be a solid rest of the season to come.