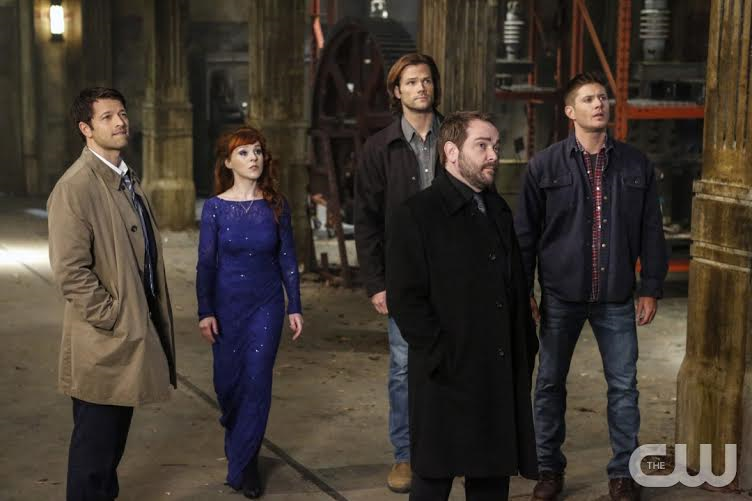 Supernatural was back in form this week and delivered a fantastic episode to the fans. It has been a solid season so far, but this episode was awesome and truly set the stage for an epic season 11 finale.

I have been waiting for Crowley and Rowena to make a reappearance this season and it finally happened in this episode. Crowley has been trying to recruit demons to help him re-take Hell so he can sit atop the throne again. He even channels his inner Donald Trump and uses the phrase “Make Hell great again.” Slight indication of the writers’ political stance to compare Crowley and Trump? I sure hope so.

Unfortunately for Crowley, none of the demons are taking him seriously and he gains exactly zero followers. Rowena is fairing slightly better in her time away from the fray as she is trying to find witches who will help her with a new spell to protect themselves from the inevitable end of the world.

Speaking of the end of all things, Sam and Dean are trying to make it less inevitable by reconciling the relationship between God and Lucifer. You would think this would be a very serious and dramatic situation for the show, but as Supernatural tends to do, for better or worse, they added humor to the scenes.

Normally I’m all for their brand of humor, but in this case it seemed a little lazy, and wasn’t really clever enough to be hilarious. They used Casifer as the angst-filled teen who locks himself in his room and plays his music too loud. While middle school Dalton definitely relates to this behavior, I just didn’t find it that funny in this context. While Casifer is busy queuing up some Good Charlotte, Chuck is busy in the kitchen making pancakes, not able to understand his son or what he did that was so wrong.

There are a couple good jokes in these scenes, but the whole idea kind of fell flat. They eventually get to the dramatic aspects of the relationship and Misha Collins absolutely kills it as Casifer, per usual. Rob Benedict also does a great job in the scene and from there on out the episode is absolutely flawless.

The Winchester’s and their heavenly friends decide that they need to assemble a super team of angels, demons, and witches to help weaken Amara enough so that Chuck can steal her away again. We then get a very Oceans 11 type montage while they go out on all of their recruiting missions. Deans job is to recruit Crowley, and while he is trying to convince the former King of Hell to assist them, he drops one of my favorite lines of the season thus far. Crowley just wants to be king again, and Dean says “To be king again, maybe you need to remember how to be a soldier.” SO GOOD. Apparently Crowley thought so too because he decides to join the fight against the Darkness.

Sam gets Rowena and the witches to help because they just can’t resist Sam’s boyish charm and with a little help from Castiel, Lucifer is able to recruit the angels. They now have their super team together and just have to hope it’s enough to take down God’s sister.

This Supernatural super team actually does quite a number on Amara and it appeared that she had been beaten fairly easily. I was going to be really disappointed by this because Supernatural tends to get rid of its baddies too easily, and Amara deserves better than that. Well it turns out she wasn’t too keen on the idea of being locked in the mark for millions of years again and goes a little insane and manages to just about kill Chuck, aka God. Now there is really nothing to stop her from destroying all of creation while everyone watches and I’m not too sure how they will stop her. My only guess is that the Dean/Amara relationship will come into play more seeing as they built it up all season and nothing has really come of that just yet.

I was hoping they would take Amara into the next season, but it looks like they will be wrapping things up with her in the season 11 finale. I won’t be upset as long as it isn’t too lazy or anticlimactic of an ending like they tend to do with their big bad guys. I can’t wait for next week and really believe the finale is going to even better than this episode of Supernatural.