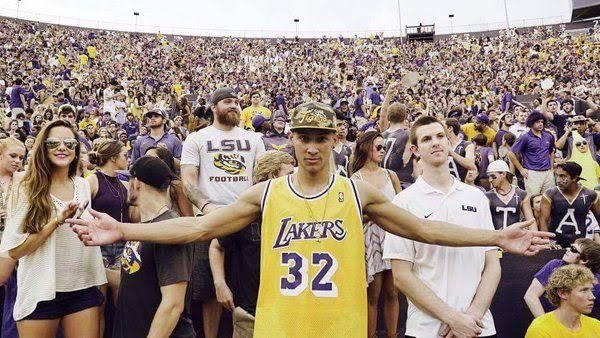 For the first time in what seems like forever, the NBA’s Draft Lottery failed to produce any drama. Often one of the league’s more entertaining spectacles off the court, the lottery had no movement as every team kept in their current slot. The most memorable moment came before the lottery when former 76er, Dikembe Mutombo, leaked that Philly had won the lottery. Still, there is a void of entertainment the league must fill which is where the actual draft will come in for the save. This draft may be weak in the depth the department, but the top five will be where the magic happens. How would the most entertaining top five go down? Let’s close the mock drafts, open up your minds, and enjoy the show.

Whether the 76ers lottery win was the result of Sam Hinkie’s tanking binge, simple mathematics, or the league intervening and accelerating the rebuild (i.e. 2012 New Orleans Pelicans lottery win), the 76ers have the first pick. There are two ways they can go about this pick. They can take the best player in the draft and select Ben Simmons, or they can take the best fit and toss Brandon Ingram the keys the kingdom.

Before the season it was a foregone conclusion Simmons’ name would be the first one called on draft night. Missing the NCAA Tournament on a subpar LSU team raised enough eyebrows to give Ingram heavy consideration. Sixers’ coach, Brett Brown, coached Ben’s father David in Australia, and has kept in contact with the family which fares well for Simmons. Ignoring that Ingram is the better fit and ignoring that Dario Saric (a player with similar frame and skill-set to Simmons) is finally coming over from Europe, the team decides if they will take Ben Simmons.

Then Bryan Colangelo’s phone rings. It’s Rich Paul, agent of Ben Simmons. It turns out Ben thinks he wants to play for the Los Angeles Lakers. He asks that the Sixers remove him from consideration and wishes them the best. Brown is visibly pissed and texts David Simmons “WTF!!??” Simmons responds “It’s just Hollywood, baby” and just like that God worked his magic to get the Sixers to make the right decision.

No team came into this draft sitting prettier than the Lakers.  For the second straight year the Lakers will pick second, but it’s a little different this time. They don’t have to deal with the conflict of deciding between Ingram and Simmons. If they don’t like what they see they can flip the pick for a superstar like Paul George or DeMarcus Cousins. As Ingram’s name is announced the Lakers’ draft room erupts in applause. They have their new superstar, Ben Simmons.

With Simmons, the Lakers now have their face of the franchise, but ideally their modern Magic Johnson. Simmons brings a similar walking triple-double skill-set that Magic and LeBron James (the player he has been compared to the most) bring to the table. Simmons uses this to leverage a monster contract from Nike who gives him everything under the Hollywood sun.

The Celtics are finally enjoying their embarrassment of riches from the great Brooklyn Nets heist of 2013. Armed with the third pick in this year’s draft is bittersweet. Danny Ainge–Celtics GM and master of finesse–can go ten different routes here as long as the final destination is a franchise player who can score.

After watching Ingram and Simmons come off the board, Ainge is placed in the scenario he knew would happen, but was praying did not. He can go with Buddy Hield, the most exciting player in college last season, or he can go with Dragan Bender and pray he ends up being Kristaps Porzingis 2.0. Both are not bad options, but Ainge wants more. Brad Stevens nabbed a five seed this past season with Isaiah Thomas as his best player. Thomas is great and all, but your team is not going far if he’s the crunch-time scorer.

With not much time to waste Ainge calls an old pal, Larry Bird. The Indiana Pacers are dangerously close to a rebuild after canning Frank Vogel. Outside of Paul George and Myles Turner there is not much that screams contender about them. Ainge offers Bird the third pick, their Dallas pick (16th overall) and the Nets pick next year plus Avery Bradley and Jonas Jerebko for Paul George.

The Celtics finally get their star player who has a great supporting cast that can only get better if Al Horford decides to join in free agency. As for the Pacers, they get the best possible haul for George and can now choose a player that does not have to be good immediately. With no shortage of options, Bird lands on Dragan Bender and builds a formidable and versatile frontcourt of the future.

Following a lot of drama there needs to be a bathroom break pick and whom better than the Phoenix Suns? They are the top five’s Meg Griffin. No one really cares what the Suns are doing for the next few seasons. They did not bother to conduct a true head coaching search, instead settling for three more years of tanking with Earl Watson. Assuming the Suns want to keep their traditional fast paced offense they want to grab the most athletic guy on the board that is not a guard.

They are rich at the guard position with Devin Booker being the franchise centerpiece moving forward. Booker is extremely young and has a sniper rifle attached to his right arm. Brandon Knight, Eric Bledsoe, and Archie Goodwin are athletic and have little trouble scoring. What do all four of these guys have in common? They can’t defend.  Dragan Bender would have been an enticing building block, but with him off the board there is not much debate that Jaylen Brown is the pick here.

Brown gives them an uber athletic wing player that can develop into an All-Defensive player and live above the rim. He will not have to be good right away giving him ample time to develop a reliable offensive game and become a major contributor when it is time to start winning.

It’s a new era in Minnesota. Andrew Wiggins and Karl-Anthony Towns look like the league’s next rising star duo, and they have the perfect coach to get the best out of them in Tom Thibodeau. With every reason for optimism, the Wolves can address whatever they want with this pick.

A majority of draft analysts have the Timberwolves taking Kentucky combo guard, Jamal Murray. The Wolves biggest need is outside shooting. Wiggins will never be confused with Ray Allen, and depending on Zach LaVine and Shabazz Muhammad to knock down outside shots is not comforting to say the least. Murray can pour in buckets from all points of the floor and can be the point guard of the future. If Thibodeau does want a point guard of the future, he could also go with, Kris Dunn, the polished point guard from Providence.

Lucky for Tom Thibodeau, he gets to do what the hell he wants now. After clashing with the Chicago Bulls’ front office often he has full control in Minnesota. He answers to no one. Why go safe and take a point guard? Thibs has made the world’s greatest lemonade with when handed lemons like John Lucas III, D.J. Augustin, and C.J. Watson. If he can win with those guys, he can make do with Ricky Rubio.

How about taking a player who hit three-pointers last season like they were layups? A guy that is not afraid to take the biggest shot of the game? Why not take Buddy Hield? He spent four years at Oklahoma, getting better each year. His biggest hole is his defense, but yet again in Thibs you must trust. Buddy may initially start the season as a sixth man, but a couple years with Thibs and we might have a Jimmy Butler-type scenario with the Wolves.