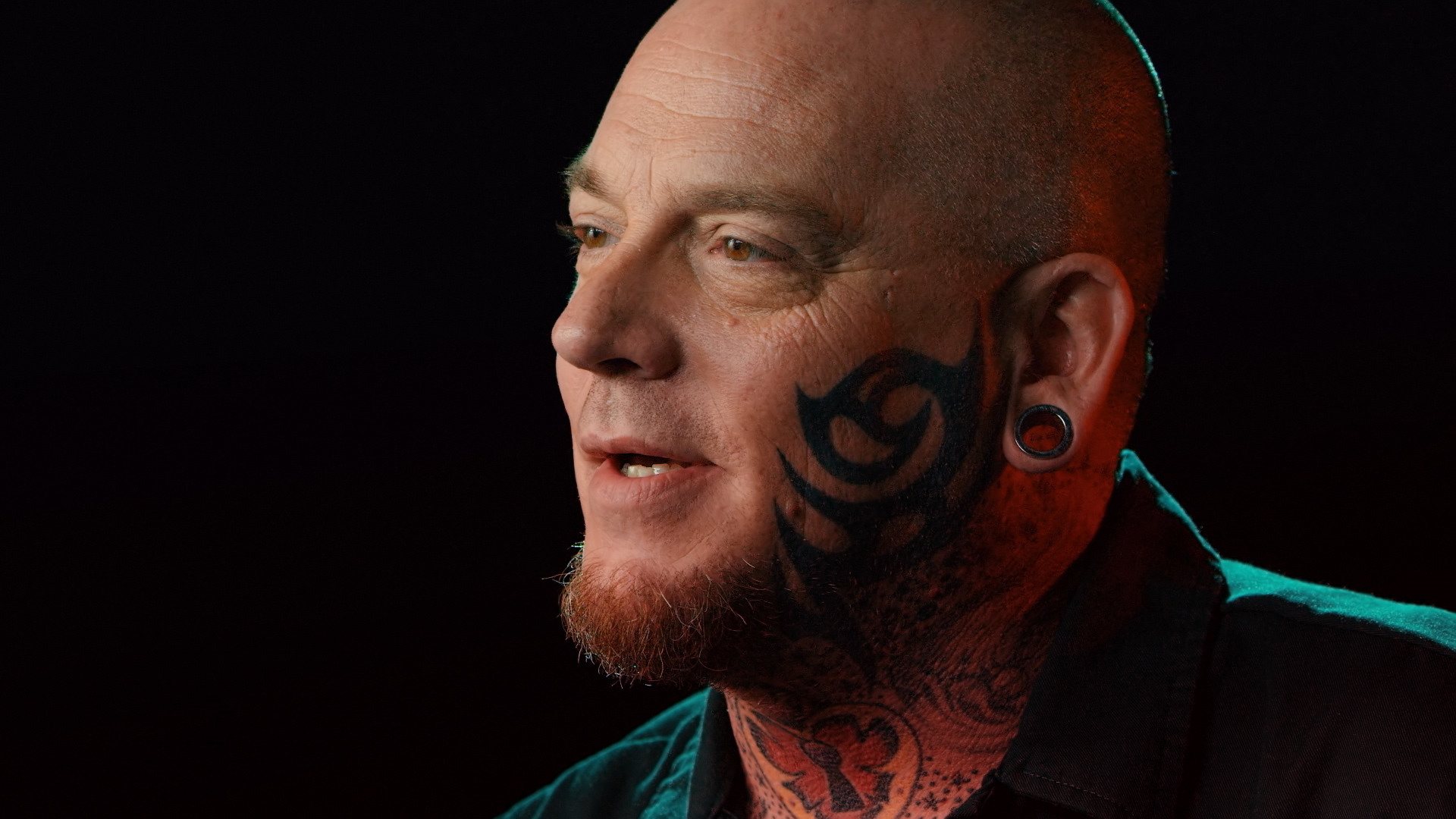 Christian Buckingham played the Ink Master game with a combination of artistry and strategy. Known for tremendous black and grey tattoos but also displaying his versatility throughout Spike’s gripping show, Christian was able to finish third and make the live finale on what felt like Ink Master‘s most competitive season ever. He finished ahead of masterful and popular artists such as Jime Litwalk, James Vaughn, Sarah Miller, and more. As a fan of Ink Master myself since it originally aired, it was an honor to interview Christian about both his experience with the show and life outside of it.

Pop Culture Spin: Christian, it’s a privilege to be interviewing you for my website. Thank you for joining us at Baller Mind Frame/Pop Culture Spin. To start, where are you from and how would you describe your life growing up?
Christian: I’m an Air Force brat and a gypsy. I was born in Colorado but pretty much just call earth home.

PCS: Have you been an artist/creative individual dating back to childhood and what’s the origin of your love for tattoos?
Christian: Yeah I’ve been an artist for as long as I can remember. I was that kid in the back of the class doodling on his notebook. As for tattoos I remember living in South Dakota and seeing all the bikers from Sturgis roll through town. I just thought they looked so cool and always felt attracted to the art.

PCS: Let’s jump into a few Season 7 Ink Master questions where you finished third and made the live finale before going into your life outside of the show. You truly played the game, forming an alliance with Anthony Michaels and taking out numerous veteran artists. Why was this your strategy and what was it about Anthony that made the two of you connect?
Christian: I love Survivor and other strategy shows. On Ink Master the skull picks are really important so it seemed to me that an alliance just made sense. I watched everyone in the beginning and knew right away Anthony was going to be really strong. I also trusted him and thought he had the kind of character to stay loyal to the end.

PCS: I actually thought when looking at the two pieces that you, Anthony, and Cleen Rock One each created for your master canvasses, yours formed the strongest combination. But I’m also sure you were genuinely happy for Anthony winning. How do you feel about the way the finale played out?
Christian: Boy I hear this a lot. I think there’s a lot of controversy over my third place finish but at the end of the day the game did me in, not my tattoos and I’m ok with that. I feel that I had very strong pieces and would love to have seen how things went if I made the final 2 but I didn’t and that’s that. I’m just happy that Anthony was the winner and I’m super happy for him.

PCS: You were outspoken when it came to sharing your opinions with the veterans during the season. Do you believe your competitive nature from the beginning helped show the returning artists that you weren’t someone who would be walked over?
Christian: Absolutely. I don’t care who you are or how big you think you are, I don’t take shit from anyone and I think the vets learned that. A lot of them were more arrogant than I think television shows. Liked the newbies a lot better.

PCS: How stressful was it being regularly judged by tattoo legends Oliver Peck/Chris Nunez, two individuals known for their in-depth critiques?
Christian: It’s very stressful in that you want to stay in the competition. But as an artist I critique myself very hard and I’ve got a thick skin. I actually felt they did a good job and a lot of the criticism was very insightful and helpful. If anything I feel like being on the show has made me a better tattooer. If you watch the show I never argue with my own critiques. I make mistakes and have no problem admitting that. I did feel that they have a soft spot for some artists though… not mentioning names…

PCS: In terms of accomplishments in your career, where does your overall success and masterful ability to play the game on arguably the most difficult and grueling season of Ink Master rank?
Christian: It’s way up there for sure. I was one of those armchair quarterbacks that always watched the show and thought how easy it would be. Man was I ever wrong. It’s so much harder than it seems. I’m actually really proud of how I did especially against the talent that was on this season. 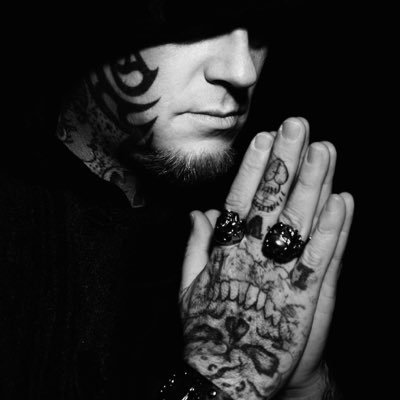 PCS: You mentioned on the show being involved in an accident while in a different line of work, a situation that contributed to you transitioning into becoming a full-time artist. Can you talk about the story there, and also, when on this timeline did the facial tats come about?
Christian: I got hit by a drunk driver many years ago and fucked my left shoulder up. I had several dislocations and ended up having 3 surgeries to fix things up. After the 3rd one workmans’ comp told me they wouldn’t cover any more procedures because the doctor said it wouldn’t be stable ever again. They offered to pay for schooling but I had no idea what I would do. A lot of my friends told me I should try tattooing and I had looked into it before but back then an apprenticeship was super hard to get. I thought I’d try again and got lucky, got an apprenticeship at Wild Side Tattoo in Vegas and here we are. Guess it was just fate.

The facial tattoos came about after I was already a tattooer. I was always fascinated with extreme tattoos and just felt like they belonged there.

PCS: Are you at the point where you don’t care if you catch dirty looks in public for your ink, or on the contrary, have people actually seemed to dig your body art?
Christian: Both. A lot of people seem to love the art. I couldn’t care less about the others. I call it my asshole filter. If you’re going to judge me by my look and not my character then cool, you’re an asshole I don’t have time to waste meeting.

PCS: I’ve seen you posting on social media about a new shop which must be extremely exciting for you. What contributed to you making the transition from your previous place of employment to this new enterprise?
Christian: I’m just sick and tired of corporate tattoo shops and Vegas is full of them. Maybe I’m just too old for change. Either way I don’t like it. So my partner Vic Vivid and I are opening Basilica. It’s going to be amazing and we’re pulling out all the stops. It will be themed and I can’t wait to reveal it. The coolest thing is we didn’t just pay some crew and designer to come build it for us. We did it ourselves, we handpicked everything and did a huge amount of the labor. The shop itself will be a work of art. I just feel like so many shops are geared toward money only. They forget where we come from and what being a tattooer is all about.

PCS: Be it mentors, family members, or other people in your line of work, who have been the most influential individuals throughout your life in terms of shaping both the individual and artist that you’ve grown into?
Christian: Oh man, that’s a long list. My family is amazing. My mom and siblings and my kids have always been incredibly supportive, hell my kids used to come scrub floors to help me as an apprentice, my wife used to help make needles when we still made them from scratch. Chucho Garcia from Old Gold Tattoo in Bellingham was a big influence on me back then and taught me what being a tattooer was all about. But my wife Mary is for sure the biggest influence. She had my back no matter what, through some pretty tough times too. And she never complained or second guessed. I always say she was my winning lottery ticket, everything else is just gravy.

PCS: It’s a major measure of trust when clients put enough faith in someone to permanently change their skin. What’s your approach when it comes to making clients comfortable and ultimately satisfied with the product that you put on them?
Christian: I think you have to be confident and honest. If you can’t do the piece tell the client. They can sense bullshit just like anyone. I’m very straight forward with clients and I think they appreciate that. Also you just have to put out solid work, nothing puts people at ease like a good portfolio.

PCS: Every artist has a specialty or at least some sort of usual comfort zone. Was black and grey a style that just immediately clicked for you and what other types of artistry do you venture into?
Christian: I’ve tried everything and still do a lot. I come from a generation where we did what the client wanted and being well rounded was a good thing. Nowadays everyone’s a “specialist.” But half of them can’t do anything else. I think tattooers are forgetting this is about our clients and not about us. If you just want to be an artist go grab a paintbrush, if you want to be a tattooer go fucking tattoo.

PCS: You have a big family, an awesome career, and just killed it for the world to see on the most entertaining tattoo show television has to offer… Is it safe to say that you’re currently living your dream?
Christian: I’ve always lived the dream. All this stuff is just for fun. I don’t care about money and things the way some people do. I gauge my life by experiences. Some of the best times I’ve ever had were when I was broke and homeless. That’s why 3rd place was ok for me. It was never about the money, I just wanted to do something that very few people get to do and I did. It was amazing and life is good.

PCS: Thank you again for the interview. I mean this when I say it – you are one of my favorite Ink Master contestants ever and I have the utmost respect for how you played the game during Season 7. In closing, where can you be found on social media and how can those interested book you for a tattoo?
Christian: I’ve got Facebook, Instagram and Twitter accounts so I’m pretty easy to find but for scheduling the easiest way is to email me at [email protected] Thanks for the interview and I sure appreciate you and all the fans, this has been a really amazing journey and it wouldn’t be possible without you guys.