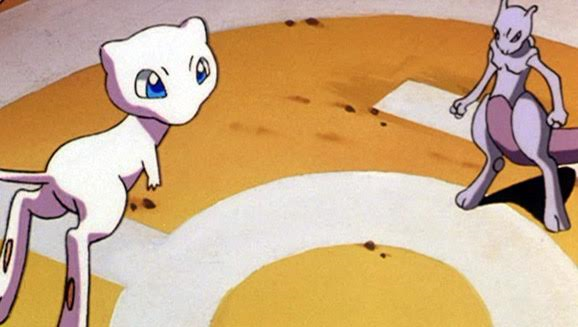 Ever since Jeanie started her Throwback Thursday posts a few weeks ago I’ve wanted to take a stab at it. There are SO many movies from my childhood that I want to revisit and see if they are just as good today as I remember them being. Well, this week I finally got my chance and decided to watch Pokémon: The First Movie.

If you grew up in the 90’s it is pretty much impossible that you weren’t exposed to Pokémon in some form or another. Now, if you were like me you were exposed to Pokémon in EVERY possible way. I watched the movies, the TV show, collected the cards, and played with the toys. It’s safe to say my parents spent a small fortune on all things Pokémon.

One of my favorite movies as a small, nerdy child was Pokémon: The First Movie. It was the first feature length Pokémon movie and therefore was pretty much a 90’s kid’s dream. I remember it being nothing but perfection, so it was time to see if it still holds up today.

Pokémon: The First Movie has a fairly simple plot. Mewtwo is created in a lab by some scientists, and then decides he’s not a fan of being a slave to the humans and sets his sights on world domination. This movie teaches a bunch of valuable lessons right from the start. First off, cloning things, especially ancient powerful beings, is NEVER a good idea. Humans never seem to learn that we aren’t as smart as we think and should probably leave things like the creation of life to nature.

The scientists explain that Mewtwo is a clone of Mew, but “Improved by the power of human ingenuity.” When it comes to movies, human ingenuity generally just causes problems, and it is no different in the world of Pokémon. The scientists quickly learn they have made a mistake when Mewtwo uses his psychic abilities to straight up murder everyone in his vicinity. Pretty dark stuff for a kids movie.

If you’re reading this post I can safely assume you’ve seen this movie a few times and won’t bore you with too much more plot summary. Let’s just talk about why this movie is still great today.

After the pretty heavy start to the movie, we get our first look at Ash, Misty, and Brock who are having a nice friendly picnic. Ash’s first line of the movie is, “hungry need food” and I can see why I related to him so much as a child, and, honestly, more so now. Soon after this scene we see Team Rocket for the first time, and they provide some amazing comedic relief throughout the rest of the movie. One of my favorite lines comes from them after Pikachu wins a battle and James says “There’s another credit on Pikachu’s charge account.” HA. Ten year old Dalton definitely didn’t get that joke, and I appreciate it so much more now.

Another fantastic joke from this movie that I definitely didn’t get as a kid comes when Team Rocket disguises themselves as Vikings to fool Ash, Misty, and Brock. Brock says “I didn’t know Vikings still existed” to which Ash replies “They mostly live in Minnesota.” I laughed way too hard at that joke. A Minnesota Vikings joke in a Pokémon movie? That’s simply some fantastic writing.

When I watch kid’s movies as an adult, I try to pay attention to the messages the movie is trying to send to its audience. A good kid’s movie teaches lessons and instills good values, even if it is on a more subconscious level. That’s why kid’s programming is such crap nowadays. They just go for cheesy entertainment and never get any deeper than that. Well, I can tell you that Pokémon: The First Movie lays the life lessons on HEAVY.

During the main fight at the end when all of the Pokémon are fighting their clones, Meowth from Team Rocket realizes that he really doesn’t want to be fighting anymore, but asks his clone “How can I trust you, we were born different.” He then goes on to realize they have a considerable amount in common and it is the similarities they should focus on rather than irrelevant differences.

Another quote from this movie that is super relevant in today’s world is “I see now that the circumstances of one’s birth are irrelevant; it is what you do with the gift of life that determines who you are.” Fucking Mewtwo said that. It really is such an important quote that is especially important with everything that is going on in our country right now. Our country needs less hate, and apparently, more Pokémon.

Pokémon: The First Movie was honestly just as good today, or even better than it was when I was a kid. There are so many jokes geared towards the adults watching that it easily just as entertaining to watch now. It is also extremely relevant to events transpiring in our country and should be mandatory viewing for the younger generations. God forbid they watch something with some deep meaning rather than shit like The Angry Birds Movie.

Also, quick side note, Jeanie would like everyone to know that Mew is the cutest Pokémon and she would really like one as a gift for an upcoming birthday or holiday.