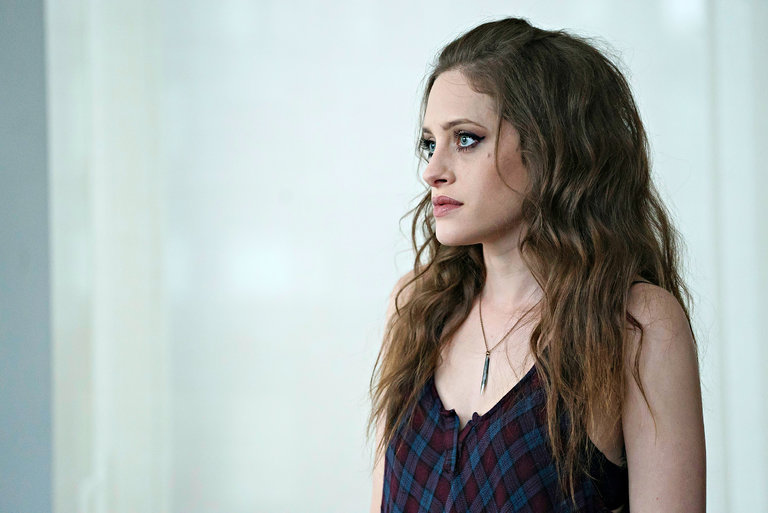 Mr. Robot starts with Elliot in the middle of a hack. This picks up from last week’s ending moment of our beloved hacker attempting to virtually crack into the FBI. As he uses his methods, Elliot reveals to the audience that his first intrusion was inflicted upon a local library at 11-years-old.

Soon after, Darlene is in Angela’s apartment. With the authorities somewhat closing on the participants of Season 1’s massive hack, Elliot’s sister requires Angela’s assistance. Darlene wants Angela to hack the FBI, unaware that her brother has already kicked that ball into motion. One of the subplots I don’t find all that thrilling about Mr. Robot is the scenes involving Tyrell’s wife, Joanna. Tyrell presents an American Psycho type of character with plenty of intriguing traits, a dynamic his wife lacks. This causes her scenes to fall short.

Darlene and Elliot meet. She discusses her interest regarding Angela’s role in their cover up, a plan Elliot is totally against. I can’t remember the last time, if ever, the siblings experienced a happy moment in Mr. Robot. Joy isn’t exactly a memory they share. Moving forward, Elliot talks with Ray. The master hacker needs to meet with a past employee who worked under Ray’s grasp. Ray is initially against this before realizing it must be necessary if Elliot is asking.

Joanna shows herself to be a cold character exactly like her husband. She has a henchman snuff out a potential leak threat, having him drugged before being fatally shot so he could process exactly why he was being killed. She frames this as a humanity based effort, the reality is of course the exact opposite. Over halfway through this Mr. Robot episode, I found it to be rather slow. Last week’s ending scene of Elliot hacking into the FBI seemed like the ideal gateway into a brilliant follow up showing. For the majority of S2 E5, that isn’t the case, although it eventually changes.

A prolonged scene of Dom and Whiterose helps pick the episode up. B.D. Wong is nothing short of outstanding in his role, and his discussion with the FBI agent makes for one of the most unusual but intriguing scenes of Season 2. Angela talks with Elliot at his apartment as they weigh their options. “My dead father is standing behind you right now” is a line Elliot utters, a rare opening up to someone other than himself. Angela offers to be a listening ear to her friend, and genuinely makes him laugh.

Darlene uses her lady charm to rally some of the troops beneath her. This signifies the drastic differences between her and Elliot – she’s loud and outward with her motives, Elliot is quiet and distant. The next scene is Elliot and Ray’s past associate plugging along. He’s bruised and bloodied, prompting Elliot to inquire as to why he left in the first place and why he’s in such a poor physical state.

They’re being watched, so all of their communication is secretly done through typing. The former worker ominously warns Elliot of the site’s true nature. Largely hidden, invite only, extremely difficult to get an account… This reminds me of the first Mr. Robot scene ever which features Elliot busting the leader of an online ring that is so sickening it’s hard to even discuss. That scene stuck with me since it chillingly set the tone for the show and reminded the viewer how depraved certain members of humanity are at their core. The man leaves with the page and login information left on the screen, leaving Elliot with the decision to click or leave it alone.

He clicks. Of course he clicks. And a lesser show wouldn’t have the brutality to show watchers what the site contains. Ray’s site, Midland City, is basically the worst of the black market – the first listing Elliot clicks on shows an under aged girl with her eyes covered. The information goes so far as to say where the child was abducted from and that she has “No STD’s.” Mark this moment as the most disturbing development Mr. Robot has ever revealed. What’s more, it instantly becomes baffling that Ray brought Elliot into the fold. Did he do his homework? Elliot may be a world class hacker, but he has morals and standards.

This freaks Elliot out deeply. Ray seems like a nice and harmless man, yet his site contains grim and depraved realities of life that shouldn’t exist. Elliot is a virtual vigilante as much as he’s an individual suffering from mental health issues. Mr. Robot or Darlene can attempt to prioritize his choices all they want, none of that changes the inherit good in Elliot that makes him want to help those being victimized.

I would call the first half of this episode dull, the second half excellent. Everything began rolling tremendously once the Dom and Whiterose scene came. Still, it’s unusual for an episode to have such a dichotomous makeup. Following Elliot’s unsettling breakthrough, we have Angela and Darlene crossing paths again. It’s revealed that f-society is still fully intact aside from the deceased Romero.

A massive moment transpires when Dom and her FBI coworkers are in China. They came to meet with Whiterose and attempt to dig into the major hack from last season. Through the majority of this international get together, everything went smoothly. Whiterose was pleasant despise his obvious conflict of interest that stems from dealing with authorities.

Then the vibe alters, and it does so dramatically. As Dom chats with fellow employees and grabs a bite from a food display, multiple agents are gunned down. At least two shooters in all black enter and wipe out those in their sights. This is completely unexpected which is a partial mark for quality TV. Dom manages to retrieve a gun from a fallen agent. She wounds a shooter who then kills himself before she can finish the job. As the other man reigns bullets in her direction, Mr. Robot cuts to two men kidnapping Elliot from his bed.

I can’t remember exactly how the scene unfolded, but earlier this season we witnessed Elliot being taken away during a struggle. At the time it seemed like a hallucination, now it feels like it was foreshadowing. With Elliot under the grasps of the two men, Ray and his lead goon emerge. He tells the hacker that he shouldn’t have looked before Elliot is severely beaten. What a role turn for Craig Robinson. A typically comedic actor has become the leader of a criminal underworld website that features the worst humanity has to offer.

The closing moment of this episode is the sound of Elliot being pounded. Mr. Robot officially has a new villain. He was always there, it’s just now that his form has been exposed. Forget a corrupt financial company who preys on the poor when you have a group of men who promote the sexual slavery of children. Despite their evil, they appear to be organized and ruthless. The scenes for next week indicate that the beating isn’t the end of Elliot’s issues. How he escapes Ray’s clutches has immediately become the biggest point of curiosity during Season 2 of Mr. Robot.