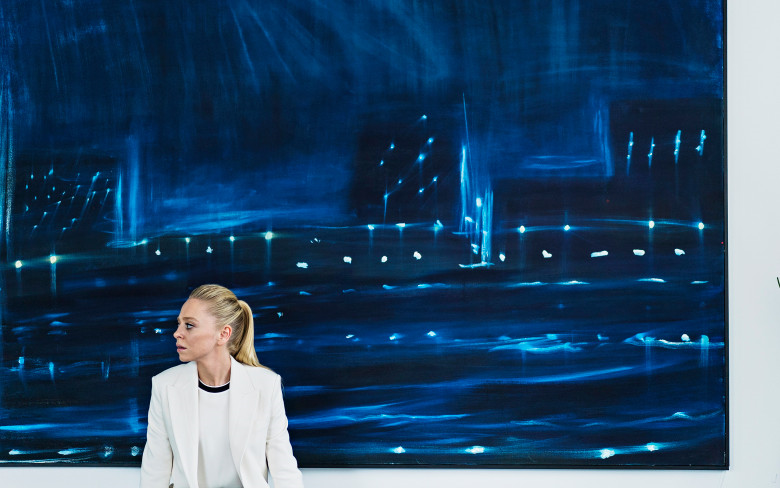 Mr. Robot opens with Tyrell’s wife, Joanna, having a dream. A fantasy, truthfully. She and her husband are attending a high class party with American Psycho vibes before reality strikes and she’s drenched in red paint by an angry citizen on the street. I believe the pissed off individual called her a “capitalist pig” in the process.

We shift to Elliot alone in a dungeon. You could call it a cell or an empty room, but mentally, there’s no avoiding its dungeon nature specifically to Elliot even if it falls short of meeting the physical definition. He and Mr. Robot search for the truth upon Elliot’s persistence before a scene change to Dom talking with Angela. Dom immediately presses Angela about her presence on a restricted floor, and her super timely job shifts, with a looming sense of suspicion. Maybe even a feeling beyond suspicion, one of certainty that lacks evidence but can’t be dismissed in the gut.

Another rough sex scene for Joanna. Haven’t we had enough of these? It seems like 50 percent of her scenes involve a Fifty Shades of Grey vibe (haven’t seen it, but still, I hear things). Then we return to Dom’s hot pursuit of Angela. This isn’t ending anytime soon. Dom is a legitimate threat who isn’t going to be easily shoved aside.

Unlike my other reviews, I’m going to keep this Mr. Robot summary relatively short and less play-by-play than usual. This is for a simple reason – this episode was possibly the most frustrating and foolishly plotted installment of the series thus far. Allow me to be perfectly clear, Mr. Robot is an excellent show that’s supremely acted with arguably the strongest editing tricks on current television. Here’s the problem – they’re pushing the “twists” and deception of the audience too far. I love the unreliable narrator premise. However, I loathe when this method is abused seemingly for a twist for twist’s sake purpose.

That’s what we have here. It turns out Elliot hasn’t been having a post-hack life that featured group sessions, lunches with Leon, and other productive activities that assisted his mental balance. Instead, he’s been incarcerated, and the majority of what we’ve witnessed during Season 2 has been the product of deception. This time, too much. Leon is a fellow inmate. Ray is the warden. His mom is a prison guard. SIGH.

Mr. Robot is better than this. The series would’ve walked a more audience friendly path had Ray simply been a real person Elliot was battling. Elliot is unstable, we know this, but this development is too unstable of a move for the show to make. It toys with the audience more than needed. It ventures into overly cloudy territory. Most importantly, it’s unnecessary. Mr. Robot is about Elliot’s up-and-down internal battle and the world class hackers who oppose the financial and societal injustices present around them. The latest plot reveal relates to the first point, Elliot’s mental state, but it harms this critical part of the show rather than assist it.

Of course, the scene of Leon murdering the racist dipshits who were about to rape Elliot is incredibly dope, and I was a fan of Angela’s presence in this episode. This showing isn’t without its strong points. The difference here is that it’s a rare installment of the show’s errors outweighing its strengths. Hence my all-caps sigh above.

I still love Mr. Robot and will review it all season. Its excellence remains high. But I’m severely unhappy with its newest episode. A twist only holds value when rarely and seamlessly pulled off. Allowing a twist to be clunky and unfair to the audience threatens the viewer-series relationship. Point being, Mr. Robot is still awesome, but it has work to be done in order to regain its previous status. No one likes being lied to, and even with an unreliable narrator premise making certain lies inevitable, there’s still a limit that shouldn’t be passed.