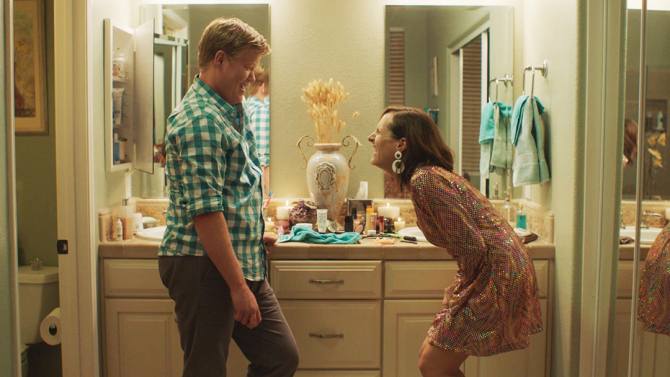 Possibly the best writing advice for aspiring screenwriters is to write what you know. Chris Kelly, writer and director of his first feature film, Other People, seems to have done just that and created something real in a sea full of sequels. Other People is the story of a struggling comedy writer that has come home to help take care of his dying mother. The talented cast of underrated actors, which includes Jesse Plemons, Molly Shannon, and Bradley Whitford, help project a slice of life on celluloid.

The story is a simple one, but it’s much more about the characters and how their lives progress in relation to one another, dealing with a loved one’s cancer. The film is very cyclical in that it shows you the daily routine, but we get to see characters grow and share moments that are touching, heart-breaking, and hilarious along the way. In that manner, it reflects everyday life in that we do mostly cycle through the usual motions, yet the details in what you do are what matter. Chris Kelly’s script and direction capture those details, resulting in a wonderful blend of humor and tragedy.

Jesse Plemons, known for his grittier characters in Breaking Bad and Black Mass, plays David, a struggling comedy writer that’s also dealing with his mom’s cancer, and his dad’s embarrassment of him being homosexual. Plemons does an exceptional job playing the everyday person just trying to be successful while juggling life’s obstacles. Plemons is very funny in this film, but he also transitions well in doing the emotional scenes. The character is fully fleshed out: he’s kind, at times selfish, but always trying to do what’s right. In the role of David, Plemons gives a very revealing performance that should be praised.

Molly Shannon gives a tremendous performance as Joanne, David’s mother that is dying of cancer. She’s funny, which we’ve all seen before, but also very touching and soulful. She’s especially wonderful in scenes that are normally supposed to be dark, such as a discussion on whether she wants to be buried or cremated. This is by far the best performance of her career, and is definitely award-worthy.

In Other People, everything from the jokes to the tears feels genuine, and very relative. This is a film that hits home for many people, especially in terms of the ignorance of others and the emotional rollercoaster of dealing with death. Bad things don’t just happen to other people because we’re other people to them as well. This film tells us again that life is short, but it does it in a way that we can appreciate it.