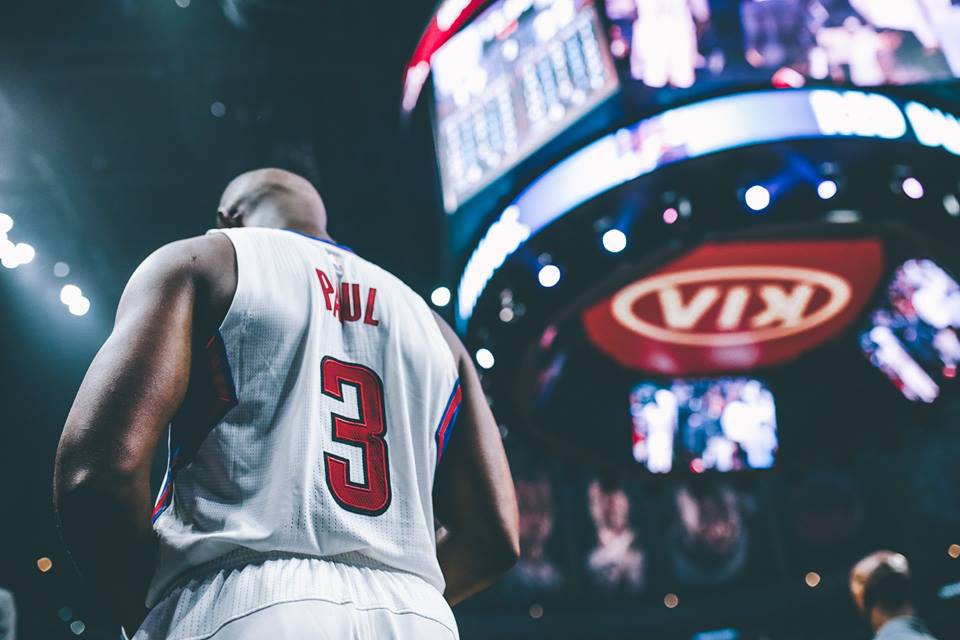 Since the NBA Draft concluded last Thursday night, the waters have been mostly calm in the ocean that is the NBA offseason. Up to this point, with the exception of Minnesota’s cruel heist of Jimmy Butler from Chicago, the rumor mill has produced only noise. Of course, with Free Agency just days away there’s no reason to believe that things won’t be picking up very, very soon. So what can we expect once July 1st rolls around? Let’s run through some of the big NBA stories out there to try to figure out how things are going to play out.

If the Celtics really do have a deal in place for Paul George, does it make more sense for them to pursue Gordon Hayward or Blake Griffin?

Adrian Wojnarowski reported that the Celtics would ideally want to wait until Hayward is signed — if he signs — to pull the trigger on a deal for George. If those two maneuvers can be coordinated, this would go down as a franchise altering Summer for the Celtics, especially if Paul George can be convinced to sign a long-term contract to stay in Boston, as I expect he could be. Here’s what I wonder: if the Celtics trade for George and lure Hayward away from the Utah Jazz, what does this mean for Jae Crowder, Jaylen Brown and the 3rd overall pick in the 2017 Draft, Jayson Tatum?

I would like to be afforded the opportunity to put on my Ed Sheeran cap and think out loud for a second. I suspect that Jae Crowder is as good as gone if any deal for Paul George materializes. The Celtics were awfully hesitant to include Brown or the 3rd pick, which became Tatum, in the framework of any trades before the Draft, so it’s unlikely that their stance would change after the fact, unless of course George agreed to sign an extension immediately upon being traded to Boston. Here’s the point I’m trying to make: If the Celtics land Paul George and Gordon Hayward, doesn’t this, at least a tiny bit, stunt the potential growth of Jaylen Brown and/or Jayson Tatum?

Perhaps I’m way overthinking this. After all, if the 2017 NBA Finals taught us anything, it’s that the Cleveland Cavaliers would be back to back NBA Champions if the Golden State Warriors hadn’t signed Kevin Durant the NBA is heading in a direction where the ideal line-up features a bunch of athletic, big-ish, versatile players who can space the floor, score off the dribble, rebound and play impactful defense against a variety of different sorts of players. Maybe down the line the Celtics best line-up will include George, Hayward, Tatum and Brown on the floor at the same time. It’s entirely possible that this is the case.

The reason I have reservations, and why Celtics fans should maybe prefer a certain alternative that has been called a “back-up plan,” is because I’m pretty sure we’re at the point in the cycle where we are once again underrating Blake Griffin. Fans and people around the league seem to be suffering from Griffin fatigue, understandable to some degree because of the shortened seasons and early Playoff exits as of late, but we’re talking about a guy who is 24 months removed from finishing up a postseason where he averaged 25 points, 13 rebounds and 6 assists per game in 14 Playoff games.

Griffin is nearing 30 years old and he’s already dealt with a long list of injuries in his career. But remember, the last few years Griffin has been playing alongside a ball-dominant Point Guard (not a knock on Paul by the way, he has every right to be ball-dominant), a Center that provides no spacing, and a rotating crew of disappointing role players. Griffin’s all-around arsenal has been shackled for the most part, only truly unleashed when Chris Paul was on the bench in a suit.

The best use of Blake Griffin is not to have him backing down long defenders on the block because that’s what Power Forwards do … it’s to use him creatively in a way Doc Rivers hasn’t leaned on for long periods of time yet. Griffin should be playing Small-Ball Center, Point Forward and any other goofy positional designation you could assign a tremendously talented dude on a basketball floor. I trust that Brad Stevens could get that out of Blake Griffin, and I trust that Griffin could get the most out of all of those Celtics role players.

Ultimately, here is how I know the Celtics should give an extended look to Griffin in Free Agency: the prospect of Paul George and Gordon Hayward playing together in Boston scares me, a Cleveland Cavaliers fan, less than Paul George and Blake Griffin does.

So if the Minnesota Timberwolves are intent on moving Ricky Rubio, what does this indicate about their Free Agency plans?

If you’re a Wolves fan and you’re in favor of trading Ricky Rubio this summer, that means you’re expecting that this deal would accomplish one of two things, but ideally both. First, the Wolves badly need more shooters. Even though Jimmy Butler, Andrew Wiggins and Karl-Anthony Towns can all score quite effectively, offensive possessions will be a struggle if the Wolves have no shooting around those three. Last year the Wolves were 20th in three-point percentage and dead last in three-pointers made, and it was recently traded Zach LaVine who led the team in three-point percentage and three point field goals per game.

Second, the Wolves can’t afford to take on more salary than necessary. In fact, I would advocate any moves that involve Minnesota creating more cap room heading into Free Agency. The Wolves will go into Free Agency with a decent amount of money to spend already, and now with a suitable Big Three in place, Minnesota could possibly masquerade as an actual free agent destination this Summer.

If Minnesota does trade Rubio, it leaves them in a position where signing a legitimate and seasoned starting Point Guard this summer is a necessity. You can’t make a win-now move like trading for Jimmy Butler but go into a season content with Tyus Jones starting games at Point Guard. Now that Philadelphia and Sacramento drafted Point Guards, and Brooklyn got their’s via trade, Minnesota would move to the top of the list of teams who need a Point Guard if Rubio weren’t on the roster and no other Point Guards were acquired via trade.

I already nailed one Timberwolves related prediction in Part 1 of the NBA Offseason Rundown last week (in case you forgot, I nailed the Jimmy Butler trade a day before the deal went down, almost to a T), so I’ll go ahead and make another: I think the Wolves end up a player in the Kyle Lowry sweepstakes this Summer. This isn’t necessarily a guarantee that they’ll sign him, but for at least 12 hours there will be a bunch of “Kyle Lowry to the Wolves” chatter on the internet.

Is there reason to believe that the LeBron James/Paul George/Klay Thompson super team rumors are true?

It’s the NBA, and it’s summertime. I’d be inclined to believe almost anything I heard on the rumor mill this time of year. But you know what’s funny … in the original version of this Rundown, which was originally posted about 1 hour before Woj Tweeted out the Chris Paul trade, I wrote the following:

If the Spurs end up trading LaMarcus Aldridge before Chris Paul makes a Free Agency decision, does this mean Paul is a lock to sign with San Antonio?

I wouldn’t go as far as saying “lock,” simply because the Spurs attempt to acclimate Aldridge has been a mostly unsuccessful venture. Aldridge has reportedly been disgruntled with his role, a byproduct of Kawhi Leonard‘s emergence as one of, if not the best two-way player in the NBA. As a result of Aldridge’s disappointing play and his disappointment in his role, the Spurs have begun shopping the five-time All-Star.

Even if Paul immediately closes the door on a potential move to San Antonio — which I’m doubtful he will; I know I’m going against just about every NBA writer who actually has sources by saying this, but I’m not buying all of the “Paul to the Rockets” talk. However, I do think the Spurs will have just as good a chance to sign Paul as the Clippers do — I’m relatively confident the Spurs will continue to attempt to find a trade partner on a potential deal for Aldridge.

I finished writing this thing at about 2:30 am, and in less than 10 hours I was not only proven wrong, but I had to eat my own words. I didn’t believe the Chris Paul to the Rockets rumors. And I definitely didn’t believe that shortly after I woke up on Wednesday morning I would have to come back and edit this thing.

What does the Chris Paul trade mean for the rest of the league?

To begin, I would speculate that it means Blake Griffin is taking his talents to a new team in Free Agency. Unless Blake would be content with making $44 million more playing in Los Angeles than he could elsewhere, it just makes sense for him to find a new home and a fresh start this summer. I’d expect Griffin’s eventual suitors to be Boston, Oklahoma City, Denver, and Miami, among others.

Next, I doubt that this changes San Antonio’s plans for the Summer all that much, particularly how they handle the messy situation with LaMarcus Aldridge. San Antonio shopped Aldridge before last week’s Draft in hopes of acquiring a lottery pick in one of the most talented and heralded Draft’s in recent memory … obviously, they didn’t have any luck. The market is cool on Aldridge, and he will be 32 years old when the 2017-18 season begins. My best guess is the Spurs will eventually sell low, cutting ties with their biggest Free Agent signing ever, and turn the rusty spare parts they get back for him into gold.

Finally, this move puts a new threat on the map for the Golden State Warriors. The Warriors will still go into the 2017-18 season as the prohibitive favorite to win the Western Conference and the NBA Finals, but if the Paul and James Harden take less time than we’re imagining to work out the kinks in a partnership of two ball-dominant players, the Rockets have an honest to God chance to really push the Warriors next season.