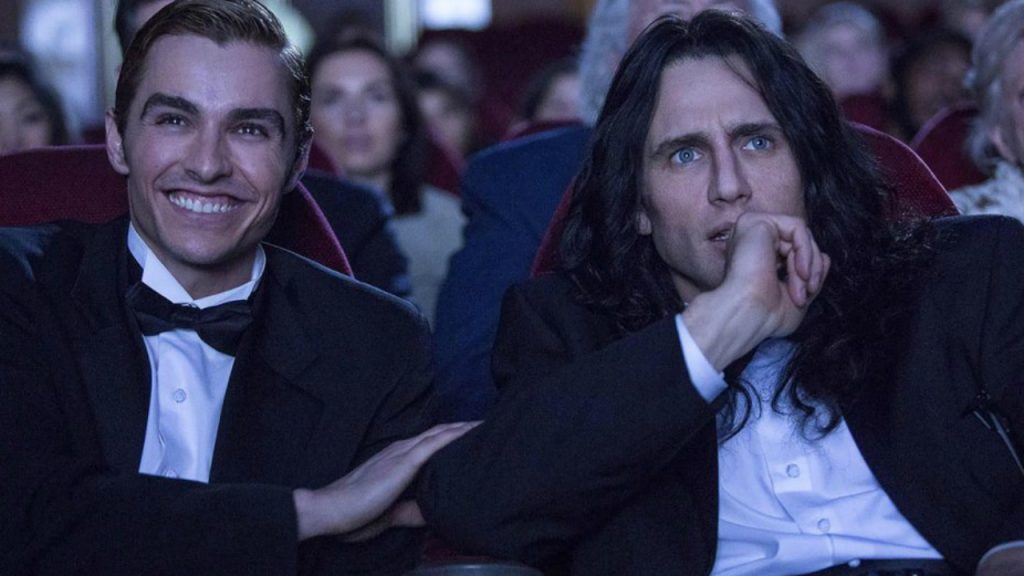 The Room is a special kind of bad movie that can never be imitated. However, James Franco tackles the challenge of making a movie about the creation of the Citizen Kane of bad movies with The Disaster Artist. Tommy Wiseau is a mysterious person with an odd accent that dreams of becoming a Hollywood actor. At an acting class, he befriends the younger Greg, who is a bit shy, but has the same dream of being on the silver screen. Together, with Tommy’s bottomless pit of mystery money, they make the worst American movie ever. James Franco commits to the role of Tommy Wiseau, his brother Dave Franco takes on the role of Greg, and they’re joined by Seth Rogen, Ari Graynor, Paul Scheer, and Josh Hutcherson.

James Franco makes possibly the best movie you can about how The Room came to be. The comedic moments are plentiful, yet there are dramatic touches that really make you feel for someone that has the passion but lacks the talent. The dialogue is genuine, and even voices the thoughts and bewilderment of The Room’s fans. It’s a straight forward tale of chasing Hollywood dreams, but Tommy is such a weird character that it’s hard to shrug off as something ordinary. Franco even recreates several scenes from The Room with great attention to detail. Stay for the credits to get side-by-side comparisons of a select few.

There are still plenty of questions surrounding The Room that get brought up in this film, but are never answered. It doesn’t get too deep into Tommy’s backstory, like where he’s really from or where he gets all his money, but that might be asking for too much. What we get is an entertaining and surprisingly emotional film about a man’s dream of making it in Hollywood.

Franco is spot on as Tommy Wiseau. From his vampire hair, to his very unique accent, and even down to the way he throws a football, Franco has it down. There isn’t a moment in the film where you feel like Franco is doing an impersonation because he really digs deep to get into the character, and no matter how ridiculous the character’s actions are, Franco always takes it seriously. Not to mention, James Franco has great chemistry with his brother Dave Franco, who plays Greg. Greg gets caught up in this dream of making it big as an actor too, but he goes at it with help from a guy that’s far from ideal. We feel for Greg and the sacrifices he makes to maintain his friendship with Tommy. He knows he’s spiraling down as the filming of The Room progresses, but he stays loyal all the way through.

The Disaster Artist could’ve just been a standard comedy about a film that’s already hilarious on its own; however, it’s more than just funny, it’s a display of two people bold enough to follow their dreams. Tommy and Greg went for it, and found success through their failure, which is actually quite inspiring.