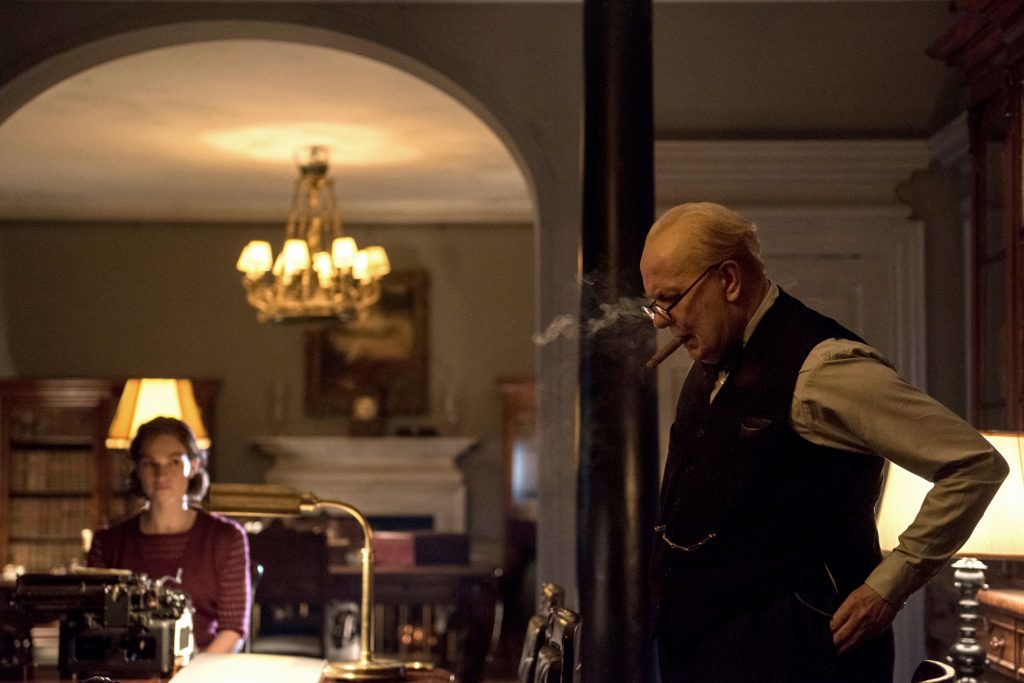 When a man insists on taking over the world, those that oppose him must elect a man equally as bold to put him in his place. Darkest Hour, directed by Joe Wright, is the story of Winston Churchill, the Prime Minister of Great Britain in the early days of World War II. Churchill deals  with the pivotal decision on whether to negotiate with Hitler or fight against the odds at all cost. One of the best actors of all time, Gary Oldman, takes on the role of Winston Churchill, and he’s joined by a talented cast that includes Lily James, Kristin Scott Thomas, and Ben Mendelsohn.

Joe Wright really gives this film some visual finesse. There are some fantastic shots throughout the film that are poetry in motion. From Winston Churchill in an elevator isolated in darkness, the transition of a war scene to the eyes of a dead man, to the slow motion crabbing shots, Wright always does something interesting with the scene.

Now, the story may not be captivating to those that aren’t interested in history, but it’s at the very least accessible because it is well made. For audience members that aren’t savvy to the details of World War II, the direction and performances are still very admirable.

Gary Oldman brings Winston Churchill back to life. He makes him relatable, as he is weary of the decisions he has to make that hold so much weight in World War II. Oldman truly puts on an acting clinic as the intimidating, bold Churchill, while managing to humanize him. What Oldman captures in his performance is the man that was considered one of the only people that could instill fear in Hitler in the position of Prime Minister, but was also anxious himself. Not to mention, he delivers some of Churchill’s famous lines effortlessly, and in electrifying fashion. From his hunched over stance, to his impeccable accent and ability to act naturally within the prosthetics, Oldman gives one of his best performances ever. The man simply disappears into the role.

The supporting actors bring their A-game to the table as well. Lily James, who plays Elizabeth Taylor, Churchill’s secretary, gives a subtle performance that really reflects the courage of someone doing their duty while dealing with harsh times. Kristin Scott Thomas, who plays Churchill’s wife, Clemmie, is wonderful playing Churchill’s rock, as she encourages and supports him throughout his crucial time as Prime Minister. Lastly, Ben Mendelsohn playing King George VI plays off of Oldman’s Churchill very well. They share a few scenes together, and each time, you see their relationship grow naturally.

Darkest Hour is a showcase for the acting talents of Gary Oldman, and an important historical film. It places you in the mindset of Churchill that leads up to making a tremendous decision during World War II. Ultimately, he believes in the courage to persevere when the odds are against you, if what you’re fighting for is worth every drop of blood.