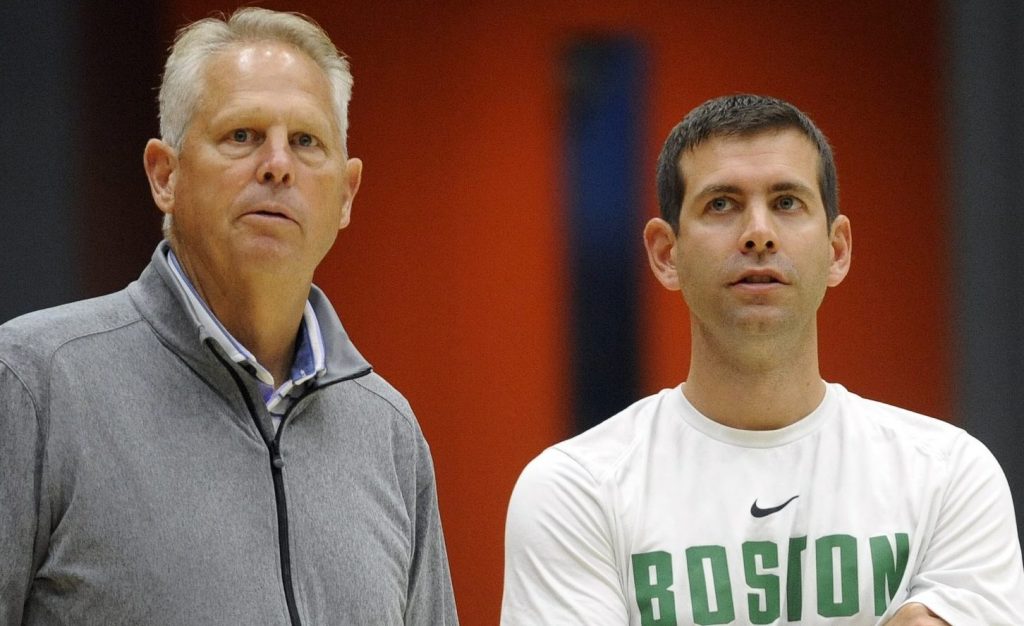 The Boston Celtics have been a contender in the Eastern Conference after reaching the Conference Finals in three of the last four seasons. Last term, their quest to reach the NBA Finals for the first time in eight years was denied by the Miami Heat, losing out 4-2 to Erik Spoelstra’s men.

Gordon Hayward continued the exodus of talent to leave the Celtics’ roster over the last three years following Al Horford and Kyrie Irving leaving the franchise. The success and failure of the Celtics would now fall into the hands of rising stars Jayson Tatum and Jaylen Brown.

Both Brown and Tatum have risen to the occasion for Brad Stevens, with the former enjoying a breakout season in terms of his production in the final third of the court in the 2020/21 term. Tatum has remained his potent self and has further room for growth to match the leading points-scorers in the NBA.

Although the performances of the duo have been outstanding, there has been a lack of support from elsewhere on the roster. It has left the Celtics off the pace of the Philadelphia 76ers at the top of the Eastern Conference as highlighted in the standings on ESPN. This shortage of support has also found them lacking the punch of the Milwaukee Bucks and Brooklyn Nets that are closely trailing the Sixers.

The Celtics do not appear to be the potent force that they once were. It appears that they will face a real battle to reach the Conference Finals amid the influx of talent at the Nets, the Bucks’ consistency, and the significant improvement of Philadelphia under Doc Rivers. As a result, both general manager Danny Ainge and Brad Stevens could be feeling the pressure as Boston appears to be heading towards another season without a title.

Did Boston Miss Their Chance?

Ainge has been hailed in the past for his turnover of the roster. He secured a king’s ransom from the Nets in 2013 by trading away Paul Pierce and Kevin Garnett, allowing the Celtics to turn the page on an aging team. Those draft picks allowed the franchise to acquire Tatum and Brown, along with Marcus Smart, while freeing up space on the books to pursue free agents.

Although the Celtics landed Horford, Hayward, and Irving, they were never able to capture the leading talent on the market. Boston missed out on landing Kevin Durant in 2016 when he opted to sign with the Golden State Warriors and again in 2019 when he chose to move to the Nets.

.@wojespn reports @KDTrey5 is planning to sign with the @BrooklynNets.

Durant has averaged at least 25 PPG in each of his last 11 seasons.

Jimmy Butler was another reported target of the franchise, but he made his way from Chicago first to Philadelphia and then to Miami, where he played an integral part in defeating the Celtics last term.

Horford, Irving, and Hayward failed to live up to expectations at the TD Garden, although the latter’s tenure was ruined by a severe leg injury sustained in his first game. Boston and Hayward will never know what could have been, had he remained healthy.

Ainge and the Celtics are now in the position where they’ve missed their window with Brown and Tatum on affordable rookie deals. Both players have now signed massive extensions and rightfully so, while Kemba Walker also takes up significant cash on the payroll. The franchise now needs to surround them with younger and role players to pursue crowns this season and in the future.

Is Stevens Feeling The Pressure?

The Celtics have odds of +550 to win the Eastern Conference as of February 4th. This suggests that the bookmakers still have confidence that the franchise can make a run in the NBA playoffs. Stevens will be feeling the heat more than most this term, as, for the first time since his arrival in Boston, questions are beginning to be asked regarding his performance. The 44-year-old was an intriguing appointment out of Butler University seven years ago and was tasked with rebuilding one of the most storied franchises in the NBA.

He guided the franchise back to relevance within three years, appearing in the Conference Finals against the Cleveland Cavaliers. Boston was well beaten by LeBron James and company, but there was hope for the future. LeBron and the Cavs defeated the Celtics once again in a 4-3 thriller in 2018, although the team was still learning and were without both the injured Irving and Hayward. The Celtics fell apart as a unit in 2019 amid ructions with Irving, crashing out in the Conference Semi-Finals against the Bucks. Stevens rebuilt the team around Brown and Tatum in 2020, only for the Heat to rise out of nowhere to stun Boston.

Stevens is quickly running out of excuses for the franchise’s inability to get over the line. The Celtics will be watching with interest to see whether Rivers can get the Sixers over the hump after years of underachievement with Brett Brown, who was fired in the off-season. Should they succeed it may give Boston food for thought about their coach. He has had plenty of talent at his disposal but has yet to win the crunch game. Operating with potentially his weakest roster outside of Tatum and Brown since 2015, he faces a mammoth challenge to prove his doubters wrong.