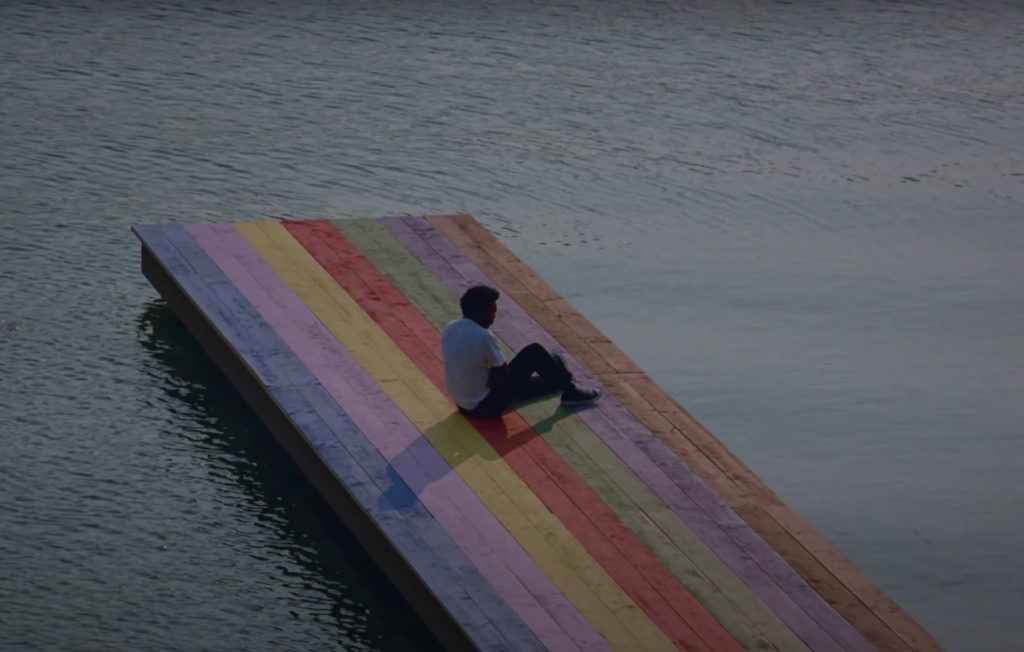 Hykeem Jamaal Carter, better known as hip-hop artist Baby Keem, followed up his critically-acclaimed 2019 project DIE FOR MY BITCH with his anticipated debut studio album The Melodic Blue. Leading into this project, Keem did a fantastic job with his rollout and built up considerable hype for this project. Starting in September 2020 with the release of singles “hooligan” and “sons & critics freestyle,” Keem went on a run of five singles, which ranged from solid to fantastic. His March 2021 track “no sense” was one of my favorite songs released this year, as the simple instrumental with Keem’s emotion-filled vocals make for a perfect late-night drive track. Another solid piece of Keem’s rollout was his use of high-profile features. Before 2021, Keem had not utilized a single feature on any of his songs and was still able to make a name for himself in the industry. However, in 2021, he released two singles with some of the biggest names in hip-hop: Kendrick Lamar (his cousin) and Travis Scott. These helped grow the hype surrounding The Melodic Blue even further, and by the time it dropped in early September 2021, Keem had the attention of the hip-hop community.

One thing Baby Keem has shown a knack for doing is starting his projects off with a banger. 2019’s DIE FOR MY BITCH started with an energetic track in “STATS,” which featured a beat switch and some hilarious quotable lines from Keem. The Melodic Blue starts similarly with the track “trademark usa.” Keem starts this song with a slow, moody intro before the song suddenly turns into a bass-heavy banger. The production throughout this album is unique, and “trademark usa” is no different, as this song has lots of bass and a smoke detector-like noise over the top. Halfway through the track, a robot-sounding voice enters, and the instrumental drops out entirely, only for a completely new bass-heavy instrumental to slide in and bring the energy back. We hear two hooks on this beat, with uncredited feature ROSALÍA singing “I’m a hot girl, A hot girl” for one, and Keem saying “I was fifteen, I was sixteen” repeatedly for the other hook. One of my favorite things about Baby Keem’s music is his ability to say almost anything, and even if it doesn’t make sense, it still sounds fantastic. His hook on this track is a prime example of this, as even though Keem repeating “I was fifteen, I was sixteen” seems to have very little meaning, I can’t help but sing along and bang my head to this infectious beat.

After a solid track in “pink panties” with another bass-heavy instrumental, and a song that frankly should’ve been longer in “scapegoats,” the fourth track of this album is where we see the first of three Kendrick Lamar collaborations. “range brothers” starts with Keem singing “I need a girlfriendddddddddddd” in a way that only he can make sound good. After this, the song suddenly switches to a similar beat, but with a vocal sample added sporadically. On this beat, we see one of Keem’s best verses throughout this whole album, and it is somehow topped by Lamar and Keem trading bars with their chemistry going through the roof. My favorite part of these trading bars is whenever the person rapping switches, some variation of “lemme get some too” is said, which makes me laugh and get hyped at the same time. After Keem finishes off the combined verse, the beat switches yet again, and we hear the already iconic refrain of “top of the mornin’” repeated seven times by Lamar. This third beat features Keem rapping and Lamar doing hilarious ad-libs in the background in a high-pitched voice, which caps off a song that is unlike anything I have heard before.

As “range brothers” ends, the vibe of the album suddenly shifts on the next song “issues,” which features Keem quietly rapping and singing over a very soft and instrumental. This is one of my favorite things about Baby Keem, as he can create heartfelt and emotional tracks seemingly better than anyone in the trap genre right now. This track is followed by two of the weaker tracks on the album, “gorgeous” and “south africa.” While these tracks are still enjoyable, “gorgeous” is nothing special, and the piano instrumental combined with Keem’s flow on “south africa” does get a bit old. However, the next four tracks are some of the strongest on The Melodic Blue.

“lost souls” is another song that features Baby Keem crooning over a soothing instrumental that is perfect for driving around at midnight and thinking. This song features yet another beat switch, with uncredited guest Che Ercu singing softly with heavy autotune before Keem continues to lay his emotions bare. Immediately following “lost souls,” the next track, “cocoa,” features Keem and guest Don Toliver sliding over an up-tempo beat and just having a good time. The next two tracks are arguably the strongest two throughout the whole project: “family ties” and “scars.” On “family ties,” we hear Keem rapping with loads of energy and intensity over a horn-filled instrumental, and we also hear the beat suddenly change with no change in Keem’s flow. This rapping is top-tier from Keem in my opinion, and he arguably keeps pace with his cousin on this song, which not many people can do. Speaking of his cousin, this is the second track thus far to feature Kendrick Lamar, and after a second beat switch, Lamar goes to town over the new instrumental. Changing his vocal tones and inflections throughout the verse, Lamar delivers one of the best rap verses I’ve heard this year, showing that he still sits on top of the rap game even with his long absence.

After we hear more bars being traded between the two cousins (which never gets old), the album’s tone transitions again to arguably the most emotional track on The Melodic Blue. The song “scars” features a sample of the drums used on Kanye West’s “Love Lockdown,” which when combined with a simple piano loop, creates one of the best instrumentals throughout the whole project. On this track, Keem provides emotional autotuned vocals crying out to God saying, “Why this life you gave so hard? Why all the choices that I make leave me with scars?” As this song progresses, each reiteration of the hook seems to have new elements added to the instrumental, ranging from hauntingly beautiful vocals to elements that enhance the piano loop. This song is my favorite from this project, and one of my favorite songs that has come out in 2021.

Following the Travis Scott-assisted single “durag activity” and the horn-heavy “booman,” this album ends on a very solid three-track run. The song “first order of business” features a smooth and soft instrumental, which allows Keem to highlight his choppy, half-singing, half-rapping flow, and this seems to be something only he can pull off. Following this, we see the third Kendrick Lamar appearance, as he performs the hook on the absolute banger that is “vent.” This song is perfect for the gym, as the intensity and energy that is found throughout every aspect of the song are through the roof. The Lamar hook, where he says “Have you ever been punched in your motherf***in’ face? What you say? Oh you haven’t? Alright, wait, b***h,” is one you have to sing along to. The Melodic Blue ends with a track that is meant to be played at full blast in the middle of the summer, “16.” The drums on this track just make you want to move around, and Keem’s delivery blends perfectly over the beat.

About two weeks after the release of The Melodic Blue, Baby Keem released a second version with three “new tracks.” These songs were two of his previously released singles, “hooligan” and “no sense,” along with a version of “lost souls” that features singer Brent Faiyaz. Both of the singles he added are very strong, even though they already came out, and hearing Faiyaz’s voice over the “lost souls” instrumental elevated the song even further.

While this album had so many highs and did so many things well, there were a few slight tweaks that I think could’ve improved the album. On a couple of the tracks, “booman” and “south africa,” even though I enjoyed the instrumentals and flows in these songs, I wish they had blended better, as they felt disjointed at times. Another thing I would’ve liked to see is better sequencing of songs on the tracklist. I think this album could have benefited from having songs with similar vibes being placed next to each other, rather than going directly from a banger like “family ties” into an emotional track like “scars” and then going back to another banger in “durag activity.” One more complaint I had was that the song “scapegoats” was way too short. This song had a beautiful sample and Keem blending seamlessly with the beat, but this song was only about a minute and 20 seconds long, which was disappointing.

Going into this album, I expected a lot from Baby Keem following 2019’s DIE FOR MY BITCH (which I am a huge fan of) and the quality of his singles. I think it’s safe to say that Keem delivered on these expectations, as this album is easily one of my favorites that has come out this year. The versatility of Baby Keem throughout this project was amazing, the features all performed well, and the production was very unique, especially for the genre of trap music. This album is firmly in the album-of-the-year discussion for me, and it somehow topped DIE FOR MY BITCH, which I wasn’t sure he would’ve been able to do so soon in his career. I’d give this album a 9.4/10, with my favorite tracks being “trademark usa,” “family ties,” “scars,” and the version of “lost souls” with Brent Faiyaz. The Melodic Blue was a fantastic next step for Keem, and it solidifies him as an artist with a very bright future.