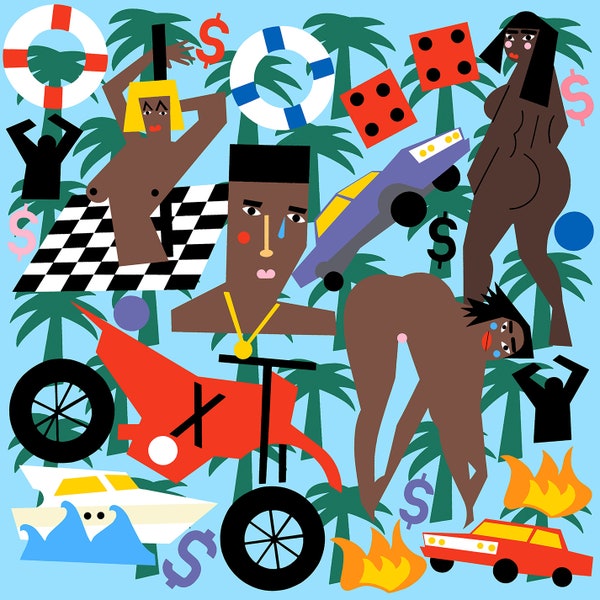 Philadelphia’s own, Meek Mill, is back after a three-year hiatus to bring the fans his newest LP, Expensive Pain. His last album, Championships, was dedicated to the Eagles finally winning their first Superbowl in early 2018. Championships had a lot of positives surrounding its content. “Going Bad” was a hit with a quality Drake feature that seems harder to find by the week. “What’s Free”, “Splash Warning”, and “Pay You Back” were other high-quality tracks on the album. However, Championships did come with its fair share of filler that wasn’t entirely bad but certainly not the most memorable music in Meek’s overall discography. Meek Mill hasn’t been entirely focused on music recently either. Between beef with other artists like 6ix9ine and investing time and money into impoverished communities, music just has not been the main focus for Meek. Meek did release a short EP back in November of 2020 labeled Quarantine Pack. And with a few features here and there on occasional albums, that’s all there’s really been. So a new album in 2021 from Meek Mill has the potential to show what the future could look like for the Philadelphia native.

Expensive Pain is filled with plenty of new and old features that give a nice change of what we’ve seen from prior albums. Kehlani, Vory, Brent Fiayz, and Giggs are some of the new artists that Meek chose to include. While Lil Durk, Lil Baby, A$Ap Ferg, Moneybagg Yo, Young Thug, and Lil Uzi Vert are artists we’ve seen Meek featured with, if not at least worked with beforehand. Meek is known for always being willing to work with newer artists while sticking to some of his OGs from album to album. It has been huge for his ability to be able to produce high-quality albums from 2012-2017 because of his willingness to always mix up who is on his albums while keeping some original artists on too. It’s a solid balance on paper for Expensive Pain.

Expensive Pain starts out with an absolute banger of an introduction in “Intro (Hate On Us)”. Meek spits bars left and right over a remixed “Hate Me Now” sample from Nas and Puff Daddy for the first leg of the track. This sets an immediate vibe that fans could be set up with another classic Meek Mill album to an already loaded discography. “Outside (100 MPH)” is another high-energy track with a solid beat switch at around the two-minute mark. Meek is always known to show pride where he’s from, making Philly references throughout this album and on this track in particular rapping, “Start ballin’ like I was Joel (Joel Embiid)  ’cause I got them Ms and Bs on my list”. “On My Soul” is the first track where things start to trend down, which isn’t positive at all considering it’s only the third track. Meek falls back onto the singing trend that he’s continued to show more and more as some form of versatility. But it doesn’t fit him nor the flow and style of this album. but quickly returns to form with another booming track, “Sharing Locations”. There’s an incredible balance between Meek Mill, Lil Baby, and Lil Durk throughout the entire track.

But Meek quickly returns with more R&B mediocrity on “Expensive Pain”. While the instrumental and melodies are much better on his track, it feels like Meek is pushing a new style of flow that simply doesn’t fit. “Ride For You” is the only singing track that’s actually of a good quality. Meek Mill and Kelhani make a surprise fit throughout. “Me (FWM)” is a failed experiment. One would expect Meek and A$AP Ferg to come together is make a track for NBA warm-ups, but this simply isn’t that. The instrumental on “Hot” is class. The key in the background adds a nice touch to a slick and smooth beat. Moneybagg Yo also delivers a quality feature that matches the fast pace set by Meek. But between expectations of what they could come together and make, it still falls short. “Northside Southside” is the rare track we see surpass expectations. One where all the pieces come together and flow gracefully with a punch. This track sounds like it could come off of DC4. Giggs provides a great feature, creating a duo I would love to hear from more. But songs like “Blue Notes 2”, “We Slide” and “Halo” all follow the same path afterward. A great pairing on paper between Meek Mill and Lil Uzi Vert, Young Thug, and Brent Faiyz, but just simply fail to reach the level of expectations.

Overall, I would give this album a 4.2/10 with my favorite tracks being “Intro (Hate on us)” and “Northside Southside”. It is pretty clear at this point in Meek Mill’s musical career that he is just focused on other aspects, especially his involvement in the community and building more for the under-served youth and the underprivileged in general. Unfortunately for Meek, his style at this point is really only one-dimensional with the talent to make quality high-energy tracks. R&B slow-style tracks just don’t work for Meek. It has been seen on Championships and three years later, not much has changed. Tracks like “Expensive Pain”, “Love Train”, and “On My Soul”fit exactly that narrative. It seems that fans will not be getting that same quality of music similar to Meek’s early career. Dreams and Nightmares, Dreams Worth More Than Money, DC4, and Wins and Losses are forever classic albums for Meek Mil’s discography and a staple for the growth of East Coast Trap Rap for the last eight or so years.