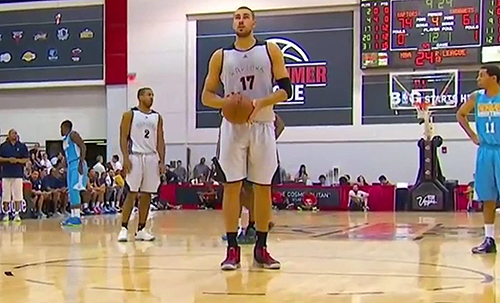 Another Summer League has come and gone, leaving me confused as to what to do with my life. It will be a long 12 months until I get to see mediocre veterans try out for teams that everybody, including themselves, knows they’re not making (I’m looking at you, Coby Karl). Enough with the sarcasm and negativity though, let me congratulate the Golden State Warriors on winning the inaugural Las Vegas Summer League championship, and Ian Clark, whose 33 points led his team to the championship win. Now that I’ve given my congratulations to the champs, I want to talk about Jonas Valanciunas of my hometown Toronto Raptors.

If you find his name hard to pronounce, just call him MVP. Over four games, Valanciunas averaged 18.8 points and 10 rebounds while shooting an astonishing 88 percent from the free-throw line, enough to make him the most valuable player at Summer League this year. Right when he stepped on the court, everybody could tell that he had been working on developing his muscles in the offseason, putting that strength on display against the Miami Heat in Toronto’s first game. He finished with 23 points and seven rebounds, going 8-for-10 from the field and 7-for-9 from the free-throw line while entertaining the crowd with some highlight-reel dunks.

If you followed the Raptors as closely as I did last year, you would know that coach Dwane Casey underused and flat out disrespected Jonas for most of the season. There were many games where fans would see veteran Aaron Gray out on the floor in the fourth quarter and overtime, even though Gray is/was the weaker player. There was one game against the Los Angeles Lakers where Gray was on the floor in the dying moments of the game and Casey urged him to go and double-team Kobe Bryant. This resulted in Kobe doing what any basketball player would do: go around the bigger and slower player. That play cost the Raptors the game.

That was just one of the moments where we saw the young Lithuanian center riding the bench instead of helping his team down the stretch. In a recent interview, however, Casey said that he plans on giving more minutes to Jonas along with more touches in the post this upcoming season. It seems his brain finally switched on and he could see the abundance of talent that was in front of him.

As a Raptors fan it was nice to see one of the players get so much recognition from the American media, including NBA-TV and ESPN. Valanciunas was seemingly the most talked about player at the Summer League and with good reason. His dominance over other second-year players made him look like a veteran. I still forget that he is only 21 years old, many years away from his prime and maybe only a few away from NBA All-Star status.

It was only two years ago that Jonas got drafted fifth overall by Toronto in the 2011 NBA Draft. As a fan, I can look back on that night and admit how disappointed I was when the Raptors drafted him; disappointment that soon turned into excitement. I wanted Kemba Walker or even Brandon Knight, not another seven-foot European big man like Andrea Bargnani. When David Stern walked up to the podium I was all smiles, excited for him to say the name Kemba Walker, the name that a lot of Raptors fans were expecting. My smile turned into a confused and upset look on my face when he said Jonas Valanciunas.

Somehow Jonas slipped by me when I was looking at prospects for the draft. I had no idea he was so highly touted, some even saying he would be the second pick behind Kyrie Irving if it wasn’t for the buyout with his European team that prevented him from coming over right away. I didn’t actually buy into any of the hype until a few games into last year’s preseason. It was against the Washington Wizards, he dunked the ball harder than I had ever seen him up to that point after pump-faking Emeka Okafor out of his shoes. Needless to say, from that point forward I was on the JV bandwagon, and he became my favorite player (along with Amir Johnson).

The improvement he has shown since that moment up until this year’s Summer League is absolutely astounding; not just his size, but his overall skill level. He has shown left- and right-hand hook shots running across the lane, offensive rebounds leading to and-1 dunks and a multitude of post moves this summer. With Kyle Lowry, DeMar DeRozan, Rudy Gay and Amir Johnson on this team, Jonas Valanciunas could soon be the man, the franchise, the go-to guy; whatever you want to call him, that will soon be his burden to bear.

With many years to go before he reaches his prime, Jonas is already starting to show signs of being a dominant big man in the NBA. Maybe someday we will see Valanciunas holding the golden ball in one hand and the Bill Russell Finals MVP award in the other, while wearing his No. 17 Raptors jersey.