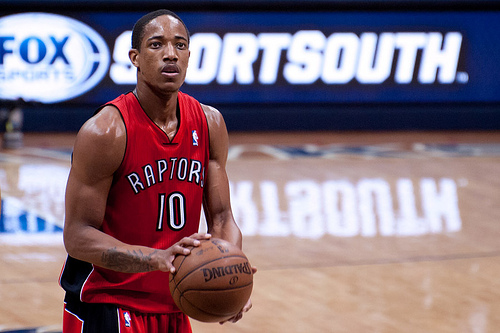 The stakes were very high in this game (sarcasm). Not many NBA fans predicted that 12 games into the season the Toronto Raptors and Philadelphia 76ers would be playing to see who the early Atlantic Division leader would be. The Raptors ended up with the victory, claiming their rightful throne atop the division (more sarcasm).

The point guards for each team had their own mini story lines coming into the game. Kyle Lowry was back in his hometown of Philadelphia and the rookie point guard for the 76ers, Michael Carter-Williams, made his return to the court after a four-game absence due to a bruised left arch. Carter-Williams started out this season looking like the early favorite for NBA Rookie of the Year, leading his team to a 4-2 start. He ended up with 10 points, 6 rebounds and 6 assists, not terrible for a rookie coming back from injury. However, Carter-Williams also had six turnovers and shot 2-for-10 from the field in 33 minutes.

Thaddeus Young was out of last night’s game due to personal reasons and his absence led to Rudy Gay having one of his better overall games this season. Rudy shot his usual 37.5 percent from the field, making six out of the 16 shots he took. Rudy has been the complete opposite of efficient so far this season (38.4 percent from the field) but despite his terrible shooting percentage this game, he managed to grab eight rebounds, dish out eight assists and score 18 points. The Raptors are currently ranked last in assists per game as a team so it’s nice to see Toronto’s most inefficient chucker pass the ball more.

Coming into the game last night against Philly, DeMar DeRozan had back-to-back great games, averaging 33 points per. He started this game out extremely aggressive, getting to the free-throw line and making his three-pointers. He poured in 33 points last night, shooting 10-for-19 from the field, 3-for-5 from downtown and went 10-for-12 from the free-throw line, a very efficient night. He had 22 points at halftime but started out slow in the third quarter. Lucky for DeMar he had his friend Rudy Gay there to score 15 points in the third frame.

The story of this game had to be the three-point shooting from the Raptors. They made 14 of them, doubling the output of the 76ers. Whenever Philadelphia cut the lead down to single digits the Raptors seemed to hit one or two threes to put the game out of reach again. Toronto won’t always be so hot from long range but if they continue the great ball movement, there’s no reason they can’t have this type of shooting night on a relatively consistent basis.

This win was not a surprising one for Toronto. The 76ers started hot out of the gates this season but have started to show their true selves. With this loss the 76ers are 1-6 in their last seven, not at all surprising to most NBA fans who had them at the very bottom of the league before the season began.

The Raptors sit atop the Atlantic Division 12 games into the year, bettering the New York Knicks and Brooklyn Nets. Don’t expect Toronto to wear the Atlantic crown for too long though. The Knicks and Nets should get their acts together soon enough and will show before season’s end why they should be considered legit.

The Raptors take their 5-7 record back to Toronto on Wednesday to take on the Washington Wizards. John Wall seems to be playing more relaxed as of late and will look to give Raptors point guard Kyle Lowry a great game.