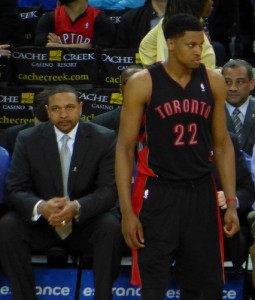 It was revealed recently that Rudy Gay banned stat sheets from the Toronto Raptors locker room. Most people’s first reaction was to laugh. The player that hasn’t shot 50 percent or better from the field in any game this season was making his teammates unable to see his awful shooting percentages. There are two sides to all stories and Rudy Gay should not be ridiculed for doing this, here’s why.

First of all, you can joke that he banned stat sheets because of his terrible efficiency. When you are the franchise player and one of the co-captains of a team, more light is shone on you, bringing those terrible numbers into the forefront. His shooting percentages can no longer be masked by the winning that took place when he played for the Memphis Grizzlies. This Raptors team is not as good, so when you shoot 37.5 percent on the season, everybody notices.

Now for the other side of the story, Rudy’s side. He was quoted to say, “I wanted to just nip it in the butt before it became an issue,” he said. “We come in here after losses, after wins and people are staring at those stat sheets, but that’s not what we’re about. We’re a team and the stat that matters is the W.”

So for all the hate being thrown Gay’s way, read his quote and you will understand where he’s coming from. If Rudy Gay can make this Toronto squad a playoff team, his percentages won’t be talked about as much. It’s up to Rudy to shut all the haters up, his play just makes it hard to believe in him.

As much as this article has been about his terrible shooting percentages, his stat line isn’t all that bad.

He averages almost 20 points and 7 rebounds per game on the season. Paul George of the Indiana Pacers averaged 17 points and 8 rebounds per game last year and made his first All-Star appearance. However, if Rudy does continue to shoot an abysmal 37.5 percent from the field and the Raptors lose more games than they win, don’t expect Gay to wear the blue Eastern Conference jersey in February.

So we’ve just started a new season and Rudy Gay is already disappointing. The most disappointing part of Rudy being a part of the Raptors this season is that he scores quite a bit and is talented enough to win games for Toronto. That’s disappointing because of the upcoming NBA Draft. There’s a certain Canadian player who wears the same number as Gay currently playing for the Kansas Jayhawks. Rudy puts the Raptors in a position where they could make the NBA Playoffs but not win a series when they get there. Toronto gets neither a good draft pick nor an opportunity to make an impact in the NBA Playoffs.

I guess Raptors fans will have to start getting used to 37.5 percent shooting rather than a 19-year-old phenom playing in his hometown. Andrew Wiggins isn’t supposed to be good, right?