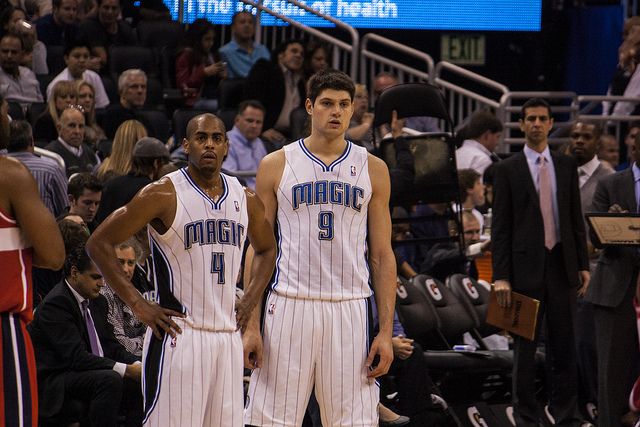 Coming in as losers of six straight, the Orlando Magic were looking to finish their six-game road trip with a bang against the Charlotte Bobcats. What ensued was some sloppy basketball, but the Magic fought and clawed their way to a 92-83 victory on Wednesday night. The win was the Magic’s first in two weeks, and only their second in 12 attempts on the road this season.

After a slow start that saw them score 16 points and shoot an abysmal 33.3 percent, the Magic came on strong, outscoring the Bobcats in the final three quarters. Orlando heated up from the field, shooting 45.5 percent the rest of the way to finish the game at 42.2 percent overall. They were able to stifle the Bobcats all night, giving up a season-low 83 points while holding Charlotte to 36.9 percent from deep.

Orlando used a balanced scoring attack to control the game. Seven players scored in double figures for the visiting Magic, including 17 apiece for Glen Davis and Jameer Nelson. Arron Afflalo added 16, and Nikola Vucevic returned to tally 12 points and 14 rebounds after missing the previous four contests with a sprained ankle. Victor Oladipo, E’Twaun Moore and Andrew Nicholson added 10 points each on the night.

From the start, the Bobcats struggled mightily on the offensive end. Gerald Henderson led five bobcats in double figures with 12 points, but shot a dreadful 3-of-14 from the field. Former Magic forward Josh McRoberts added 11 points, while Al Jefferson, Kemba Walker and Cody Zeller added 10 apiece. The Bobcats had trouble putting together consistent offensive possessions, scoring no more than 24 points in a single quarter.

Magic Game Notes
Vucevic Returns Strong
Nikola Vucevic’s impact was felt early on, as the rebounding machine grabbed eight of his game-high 14 boards in the first quarter. In the four games Vucevic missed, the Magic were out-rebounded by an average of 17 boards per game. Wednesday night was a different story, with the Magic winning the battle of the boards 52-41. Vucevic’s impact on the team is huge, and with him back and healthy, the Magic could be in line for some more wins.

Glen Davis Leads the Charge
For the third straight game, and sixth time this season, Glen Davis scored 16 points or more. Davis has been an emotional and vocal leader for the Magic all season, even when he was not on the floor. His return was a welcome sight for the Magic, who lacked some toughness on their front line. Since his return, Davis has averaged 13.6 points and 5.9 rebounds, but is shooting only 45.6 percent from the field. If he’s able to stay healthy and continue his solid play, a contending team looking for some big man depth could call the Magic up to inquire about his availability.

Magic Lock-Down Perimeter
After giving up eight made threes or more in six straight, the Magic found success defensively, holding the Bobcats to just four makes from beyond the arc. The team’s ability to close out on shooters and force them into tough shot attempts showed on Wednesday night. Charlotte shot a freezing cold 12-of-54 from outside of the restricted area, including 6-of-31 from mid-range. It was good to see the Magic force the opposition into tough shots after giving up a countless amount of wide open looks in the five games previous on the road trip.

Walker, Jefferson, Henderson Kept Under Control
While all three players ended up in double figures, they struggled mightily from the field. The trio shot a combined 11-of-42, including 1-of-7 from three. The Magic were able to be physical with Jefferson, knocking him off his spots in the post and not allowing him to get a good rhythm going. Henderson and Walker scored four points combined in the first half and were forced into difficult, contested shots most of the night. The Magic’s ability to hold the trio—that average roughly 48 points combined per game—to 32 was another welcoming sight for the reeling defense.

Stat of the Night
All five Magic starters had positive +/-, while only one player in the Bobcats starting lineup, Jeff Taylor, registered a positive +/- on the night.

Post-Game Interview
After the game, the Magic’s broadcast interviewed Glen Davis, who had another very memorable interview. Watch it here.