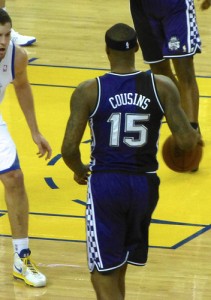 Is there enough room in for two “stars”?
Image courtesy of Matthew Addie/HeelSports.

The Sacramento Kings have pumped new life into an otherwise declining season, accepting a trade with the Toronto Raptors that sends off John Salmons, Greivis Vasquez, Chuck Hayes, and Patrick Patterson, dawning the arrival of Aaron Gray, Quincy Acy, and Rudy Gay.

If you didn’t already know, Rudy Gay is a pretty big name in the NBA, and he’s going to be a pretty big deal in Sacramento.

As one of the premier NBA talents during his time in Memphis, it appears that Rudy Gay has lost some of his previously known respect as one of the most deadly scorers in the league. When traded to Toronto, Rudy’s field goal percentage and overall offensive prowess dropped from his days of awe-striking scoring talent in Memphis. Although his scoring ability is still very clear, this new trade to Sacramento may give Rudy a chance to start over and improve his efficiency.

He will likely play the power forward position to form a deadly front court when paired up with DeMarcus Cousins. But just one question remains regarding the potential of this partnership. One uncertainty may make or break this seemingly promising combo of Rudy Gay and DeMarcus Cousins.

Can DeMarcus Cousins handle playing with another star?

Since DeMarcus Cousins started his campaign in Sacramento, he has been the main, go-to player each and every game. With the arrival of Gay, DeMarcus will be forced to do something he’s never done in his professional career: play with someone who just might be better than him, someone who may force him to share the spotlight in Sacramento.

How this spotlight is shared ultimately comes down to the judgement of Mike Malone, who will have the decision of choosing how the Kings utilize these two players.

To me, it seems obvious who the Kings should choose to be their go-to guy. For the Kings to develop a more consistent offensive game, the team must give a flurry of touches to DeMarcus Cousins. Cousins is an absolute force to be reckoned with in the post, bodying up opposing bigs with ease and finishing at the hoop effectively. With Rudy Gay’s proven efficiency problems, Sacramento Kings fans should expect to see the ball in DeMarcus’ hands for a majority of offensive possessions.

This trade will work best for the Kings if they learn to use Rudy conservatively. The team can’t rely on Gay to make his shots if he has the ball on every single possession like he did in Toronto. Shooting under 40 percent this season, he’s proven that he needs to share touches with another player, and Cousins might be that player.

Overall, this trade seems to be promising for the Kings organization. Regardless of whether or not it works out in Sacramento’s favor, Vivek Ranadive has renewed Sacramento’s excitement for the rest of the season with this deal. How it translates on the court will be a whole different story, and one we will be following closely.