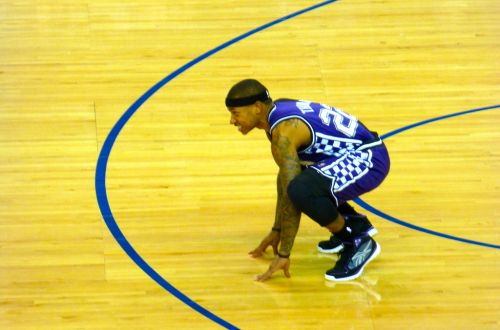 One year ago, the Sacramento Kings lost their last game of the season to finish with a 28-54 record, a sequence they managed to replicate Wednesday with a 104-99 loss to the Phoenix Suns.

That, however, is where the similarities begin and end.

More than half the roster is different, there’s a different coach on the sidelines, and a different front office running the show.

But despite all the changes, stability might be the biggest difference of all.

This time last year, a cloud of gloom and uncertainty hung over the regular season finale. With the partnership between the team and the city in question, fans were on edge, their minds elsewhere.

Wednesday, though, the mood was light. After wrapping up his first season as a head coach, Michael Malone thanked his team for its effort throughout the year.

“There were a lot of ups and downs, and we could have gone sideways, we could have let go of the rope,” Malone said. “I was proud of the fact that, through everything—the losses, the tough stretches—that we stayed together, we stayed united. That’s a huge positive moving forward.”

The team finished with the same record and will likely draft in the top 10 for the second year in a row, but this time there’s a future to plan for and look forward to—for Kings fans and personnel alike.

While Malone was grateful for players’ effort, he acknowledged that there’s a long way to go, particularly in a conference as strong as the West, suggesting that building the roster through player movement this offseason would be key.

It’s likely to be an eventful summer for the Kings front office, which, along with the responsibilities that come along with draft preparation, may be negotiating with two of its top players. Isaiah Thomas will be a restricted free agent this summer and Rudy Gay can opt out of his contract to become an unrestricted free agent.

Thomas, who was selected last in the 2011 draft, had a $884,293 salary this season. Coming off of a season in which he averaged over 20 points and six assists, he’s sure to get a lucrative raise come July. Thomas admitted he’s excited about free agency, but said Sacramento is at the top of his list.

Gay is due over $19 million next season, but could opt out in favor of securing a long-term contract. His time with the Kings has been much shorter than Thomas—Gay arrived via trade in December—but Gay echoed Thomas’ sentiments about his current home.

“They’ve done things for me this season that I can’t say any other organization has done. … They really take to the family aspect of the team. I think all the great teams and the great organizations, they have that,” Gay said. “It factors in a lot. Obviously I have relationships with these guys already.”

Two players the Kings won’t have to worry about negotiating contracts with for years are rookies Ben McLemore and Ray McCallum, both of whom led the team Wednesday against the Suns.

Malone evenly divvied up playing time between starters and reserves, opening the door for younger players to have an impact. McCallum tallied 13 points, while McLemore racked up a career-high 31 points and five assists.

McLemore was aggressive and effective throughout what ended up being his best game of the season. He displayed a consistency and shooting stroke that’s been lacking most of the season. He and McCallum have had their best stretches of the year over the last few weeks, capping off a year of peaks and valleys for both.

“(McLemore) could have stayed down and hung his head and felt sorry for himself, but that’s not who he is. He’s a fighter—he’s very resilient,” Malone said. “I think both of those guys experienced some success this year, but as a rookie there are a lot of things they need to work and improve on, and I know they will.”

There is bound to be turnover this summer—the front office has proven its willingness to adapt and move pieces – but there’s a plan and a future that includes Sacramento, which is far more than could be said at this point in previous years.