The Atlanta Entertainment Basketball league started their second season on June 15th with two games featuring four of the best teams in the league. This past weekend kicked off the first full weekend of games. Saturday gave fans three games to pick from and Sunday dropped two.

Lets get into Saturday’s action.

The Atlanta weather did not let us down. Ninety-one degrees and sunny seemed like the norm all week. That was until 2 PM Saturday afternoon. As AEBL staff began to make their way to the park to get everything organized, the first rain of the week began to come down.

No fret, the back-up plan is always in effect, especially when dealing with ATL’s on-again, off-again weather patterns. The games were moved to the indoor court at 400 Merrits Street and the games began as usual.

The first game of the day was between Grind Hard HD and HandsDownManDown. 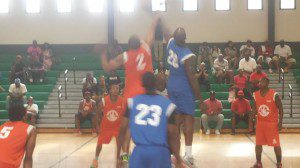 Grind Hard got off to an early 11-8 lead. The coach for HandsDownManDown told me that this was the first time the team has played together as a unit, so he wasn’t worried about the sloppy start.

He was right. As the game went on, HDMD’s center Marcos went off, scoring eight points on his own. He owned the block for most of the game, giving the Grind Hard’s big men fits.

With most of the offense going through the post for both teams, the game was pretty tight for four quarters. At the half, the game was knotted at 45.

As the game came within three minutes left, Grind Hard was up 58-57 and looking like they would pull away from the HDMD squad.

With seconds left in the game, Grind Hard was up 65-63. That was until a big time three-pointer with no time on the clock pushed HDMD to the win and sent Grind Hard home wondering how they let this game slip between their fingers.

The second game of the day paired up Lou Williams’ Uptown Sounds squad against Monopoly Bros.

Lou has assembled a team of college and pro players who bring length, size and athleticism to any game that they play. From the opening tip-off, Uptown Sounds showed all three. Before you knew it, Lou’s team was up 24-10 in the first quarter. 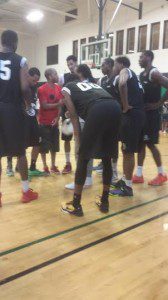 There was no looking back from there. With five minutes left in the first half, the team was up 39-15. While Monopoly was able to cut the lead down some in the second half, they couldn’t compete with the athletes that Uptown Sounds rolled out. Uptown Sounds marched onto a 82-73 win and a 2-0 mark in league play.

The last game of the day pit Land of Flyy vs Good Life Music Group. Good Life showed that they can hang with some of the best in the league after their performance last week against Uptown Sounds.

Today, they were trying to even up their record with a win over Land of Flyy.

Both teams paired up very well together. Going into the half, the score was 35-32 with Land Of Flyy up by three.

In the second half, Good Life kicked it into another gear. They jumped the lead up to seven quickly in the third. They never looked back from there. Good Life would go on to win the game, 75-58.

As Saturday turned to Sunday, the rain left and sunshine dominated the day. That meant that we were back outside and onto the hardwood floor.

Douglass might’ve wanted to suit up today, because Street Execs was one of the best teams in the league. Coming off a close loss to Trinidad James’ Gold Gang in the first week, left Street Execs ready to hang a win on somebody.

The CTC jumped out early on Street Execs going up 13-6. They would carry that lead up until halftime where they were up 23-13.

After halftime, a huge supporter of the Street Execs squad showed up to show his team support. Rapper 2 Chainz appeared during halftime to help motivate the team. 2 Chainz got into the lay-up line with the fellas and even coached some in the second half.

That might’ve been the spark that they needed to get back into this game.

Street Execs didn’t shoot well, but they kept the game close. They would chip away at CTC’s lead slowly throughout the second. 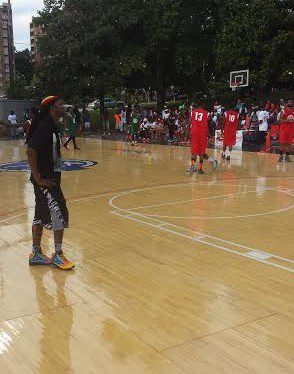 By the fourth quarter, the game was anybody’s to have. Street Execs had a little more left in the tank than CTC though. After trailing all game, they would go up 41-36 and never look back. Street Execs picked up the win and brought their record to 1-1 in league play.

Both teams brought out some good athletes. The problem of the day for both teams was shooting. Neither squad could hit the broad side of a barn Sunday night.

After a first half dominated by big defensive plays, Gold Gang was up 20-11 over Forbes Atlanta.

The sluggish shooting followed both teams into the second half. Gold Gang would pull out a win, 39-31 over the Forbes Atlanta team pushing their record to 2-0 in league play.

The terrible shooting day didn’t curb the confidence of Gold Gang coach J. Ross any. When asked at the end of the game if his team feared Street Execs or Uptown Sounds he said, “If Uptown Sounds want to beat us, then Lou and his friends from the Hawks are going to have to suit up and come play.”

Bold words from a bold team.

Games resume this Saturday and Sunday. For more information on the league, check out AEBLhoops.com.