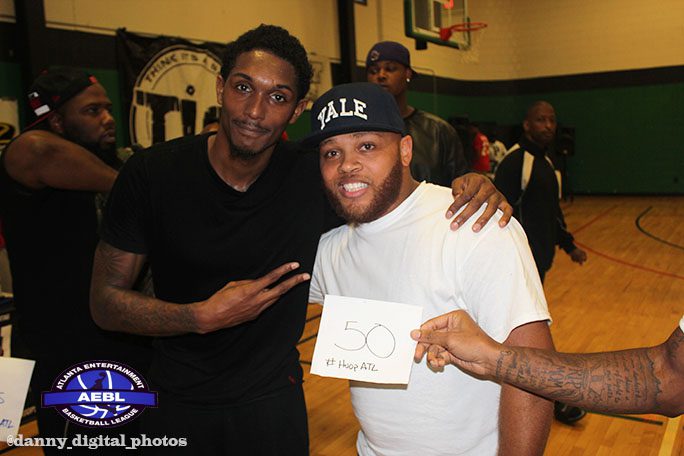 We have just three weeks left in the Atlanta Entertainment Basketball League season. As we head into Week Six, we get a glimpse into what the playoffs might look like.

This weekend, Gold Gang, Street Execs, Uptown Sounds and Good Life Music Group showed why they might be the best four teams in the A.E.B.L..

Saturday’s games kicked off with a slate of three good matchups.

Grind Hard took on Land of Flyy in the first game of the day. This was a game that Grind Hard had control of from the tip-off.

Led by guard Brice Booker, whose 34 points was, at the time, the season-high scoring record. I say at the time because over the next 24 hours, that record would change two more times.

Backed by his 34, Grind Hard took home a much needed 87-56 win over Land Of Flyy, which is still looking for its first win of the season.

The second game of the day saw T.I.G’s Gold Gang take on #CTC (Cut The Check). Gold Gang came into the game with an undefeated record. #CTC wasn’t so much in awe of that. 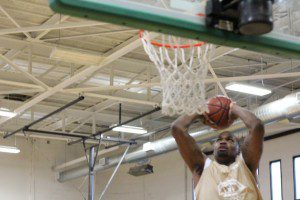 CTC played tough early on. For more of the first half of the game they had the lead. Gold Gang was missing a crucial piece of their squad on Saturday; center Jamario Davidson was out for the day. His presence on the block on the defenseive end and his ability to stretch the floor on the offensive side was sorely missing for Gold Gang as they struggled to keep CTC out the paint.

CTC rolled out former University of Georgia standout Travis Leslie who really helped them on the offensive end. The game was tied for the most part thanks to the play of Leslie and others on the CTC team. As we headed into the third, Gold Gang looked vulnerable. Were we going to see Gold Gang lose their first game of the season?

Thankfully, Gold Gang still had point guard Lil’ D and shooting guard Paul Delany III on the court. The terrific two kept Gold Gang in the game as we headed into the fourth, where the game was really decided.

Heading into the fourth, Gold Gang turned up the intensity. Eventually, their one-point lead turned into a five-point lead. CTC would not go down without a fight. They battled all the way through the fourth quarter, cutting the lead to one eventually. Paul Delaney III hit a few big buckets to push the lead back to three. By the time the buzzer sounded, Gold Gang survived a street fight with CTC and pushed their record to 6-0 after their 74-70 win. 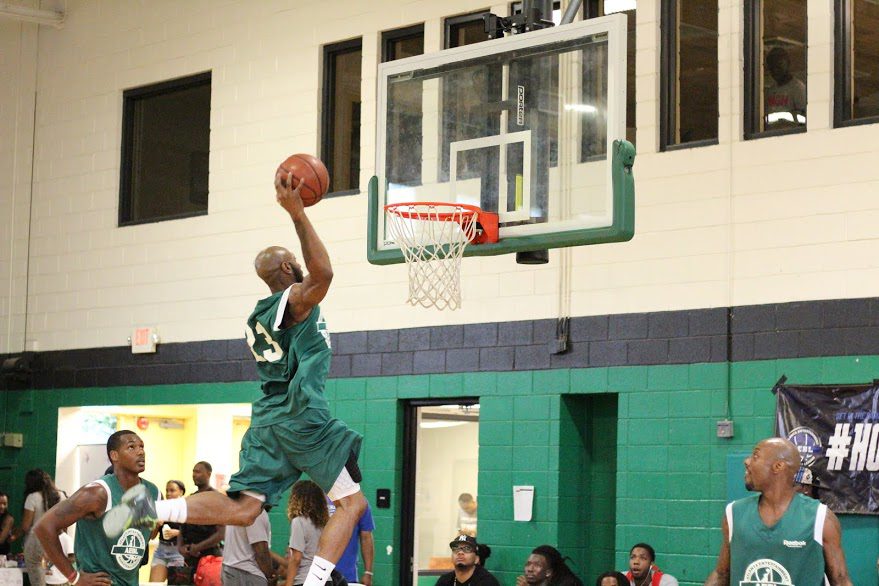 The last game of the day was Good Life Music Group playing Blacktop ATL. Blacktop is a new addition to the league, replacing Forbes Atlanta. Being that this was their first time really playing as a unit, Blacktop ATL held their own against Good Life Music.

Led by guards Cam Tatutm and Chris Allen, Good Life is one of the most dangerous teams in the league. Tatum and Allen are able to go off for buckets at will. Monday, it was Tatum who bared the scoring load. As I mentioned, Brice Booker held the leagues highest scoring game with 34 points. He wouldn’t have that record long. Cam Tatum was in rare form on Saturday: three-pointers, lay ups, free throws. Tatum was a scoring machine for GLMG. By halftime, he had 24 points and was already threatening to take Booker’s scoring record.

Cam Tatum with 24 before the half. He’s shooting for the highest scoring output of the season

In the second half, he fully took over. As Good Life cruised to a win, Tatum would finish the game with 42 points, knocking Booker off the record books and replacing him as the top-scoring performance in league history.

As we moved into Sunday, everyone was still buzzing about Tatum’s performance. Something tells me that buzz found its way into the ears of Lou Williams. We’ll get to that later.

The first game of the day featured CTC taking on Grind Hard. This was Grind Hard’s and CTC’s second game in the last few hours. I’m sure they were fatigued.

CTC took advantage of that fatigue. Both teams looked tired, but CTC was the least tired of the two. They ended up with a big win at the end of the day over Grind Hard as the clocked ticked down to zero.

The next game pit Blacktop ATL vs Court Cred. This game was full of surprise appearances. Jamario Moon and Damien Wilkins came in to play for Court Cred, while rapper Roscoe Dash suited up for Blacktop.

Court Cred took advantage of Blacktops inexperience as team and jumped out to an early lead that they never let up on. Backed by a 20-plus scoring output from Wilkins, Court Cred took a 69-60 win.

The gym erupted before the third game started as Lou Williams swaggered his way into the gym. Williams played last week for his Uptown Sounds team, putting up 28 points in a loss to Street Execs.

This time, Williams came out to prove a point. Uptown Sounds took on a tough HDMD team. HDMD’s strength is in the post, but Uptown Sounds’ guard play is what killed them.

As we went into this game, we’ve literally seen the league scoring record change hands twice. As we headed to halftime, Lou Williams was threatening to make it three straight. He ended the half with 30 points and Uptown Sounds had a 16-point lead over HDMD.

They took care of Land Of Flyy with ease. They marched onto another win – 80-61 over Land Of Flyy.

Overall, this weekend might have been the most exciting one to date.