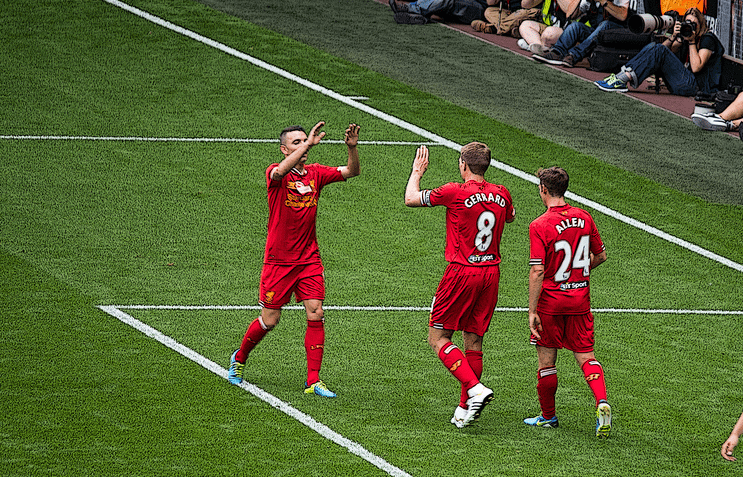 No Wayne Rooney, no problem, why you shouldn’t leave Steven Gerrard on the bench, and much more in this week’s edition of the Barclays Premier League Capsule:

Burnley remain unbeaten in their last four Premier League games after their draw with Newcastle. It was the first ever meeting between the two clubs in the Premier League. Striker Danny Ings didn’t score, but he set up teammate George Boyd to give the Clarets a half-time lead. It didn’t last long as Papiss Cisse scored almost immediately after the restart—his fifth of the season. Burnley remain in the relegation zone while Newcastle are mid-table in ninth.

Danny Ings (Burnley) – he’s been Burnley’s best player in the past few weeks and could’ve scored, but for the Newcastle goalkeeper’s right hand. He set-up the opener and was involved throughout.

Papiss Cisse (Newcastle) – justified his managers faith in him by scoring the equalizer. Will be looking to add more goals to his tally this season.

Liverpool had to come from behind after Leicester took the lead, thanks to Simon Mignolet’s comical own-goal. Jose Ulloa’s shot hit the bar and ricocheted off of Mignolet’s head into the goal. The lead didn’t last long, when Adam Lallana scored the equalizer to make sure the teams went into the dressing rooms level. After the restart, it was captain and club-legend Gerrard who gave the Reds the lead with a hard, low shot. Moments later, Wes Morgan, who was having a horrible game, was sent off for a poor tackle. The 10-man foxes tried to keep the score-line respectable but couldn’t prevent Jordan Henderson adding a third to give Liverpool back-to-back wins.

Steven Gerrard (Liverpool) – a return to the first-team, and a goal to top it off. The captain looked fresh and full of life. A real leader, and he will be hoping to steer his team up the table.

Man united go on to win their fourth successive league game, while Stoke City suffer their third loss in a row. United were without striker Rooney, but it didn’t matter as they bagged the three points anyways. Marouane Fellaini scored the opener after good work from Ander Herrera. Stoke city equalized when Steven Nzonzi struck the ball clinically past David De Gea, despite United’s shouts for a free-kick. Former Chelsea midfielder, Juan Mata scored the winner from a free-kick just before the hour mark. But despite Stoke’s best efforts, they couldn’t find the equalizer.

Juan Mata (Man United) – started the match and played well, deserved his goal. Mata will be looking to build on his performance in the coming weeks.

Steven Nzonzi (Stoke) – the midfielder did well to break up most of United’s attacks. He managed to advance forward well and score a thunderbolt-goal.

QPR couldn’t record back-to-back wins in the Premier League, and as a result remain in the relegation zone. Swansea meanwhile move up the table with this win. The Swans left it late though, scoring two goals in the last 15 minutes of the match. Ki Sung-Yeung scored the opener with a curling effort, his first league goal at the Liberty Stadium, and Wayne Routledge added a second moments after.

Ki Sung-Yeung (Swansea) – involved throughout, and scored a wonderful goal to give his side the points.

Robert Green (QPR) – has the highest saves in the Premier League and he showed again why, making five saves, including one right off the line from a Gylfi Sigurdsson free-kick.

Christian Benteke returned to the Villa line-up to help his side to a victory against Palace. The eagles have only won two games in front of their supporters all season, playing nine at home already. Villa were the more clinical on the night, Benteke sending a low, clinical effort past the Palace keeper after 30 minutes of play. Villa are mid-table in twelfth while Crystal Palace are one-point away from relegation.

Christian Benteke (Villa) – back in the line-up after his suspension, and back on the score sheet, netting his first of the season and only villa’s eighth.

West Ham remain fifth, and look to have solidified their position in the top-five after they came from behind to beat West Brom. West Brom took the lead, ending their one month goal drought after Craig Dawson scored ten minutes into the match. West Ham proved their strength and perseverance when Kevin Nolan equalized before James Tomkins scored the second to give the Hammers a half-time lead. They went on to win and heap more misery on West Brom who have won once in their last eight matches.

James Tomkins (West Ham) – hasn’t scored for two years, but worth the wait after he gave the Hammers the lead, and victory.

The Gunners left it late against a Southampton side who have stuttered recently in the race for top spot. Alexis Sanchez was the hero once again, as he thumped home the winner with one minute of regular time remaining. The win moves Arsenal, who sit sixth, within three points of the Saints, who are third. Southampton had one shot on target the entire match, but they will be hoping they can grab a win after losing back-to-back games.

Alexis Sanchez (Arsenal) – many questioned his ability to adapt to the Premier League, but he has proven his doubters wrong after netting his ninth league goal of the season.

Didier Drogba was let loose at Stamford Bridge and was he ever hungry, helping Chelsea maintain a six point lead at the top of the table. Tottenham started the match stronger, and even hit the post early on when Harry Kane’s shot beat Thibaut Courtois, but not the bar. Drogba set up Eden Hazard for the first goal, and shortly after made it 2-0 himself after capitalizing on Tottenham goalkeeper Hugo Lloris’ miskick. Substitute Loic Remy added a third, using his strength well to shake off his defender and finish well past Lloris. Tottenham drop to tenth, as they suffer another set-back for their pursuit of the top-four.

Didier Drogba (Chelsea) – the Chelsea legend led the attacking line brilliantly, registering an assist and scoring a goal to help his team continue their unbeaten start to the season.

Romelu Lukaku scored his sixth goal of the season to give Everton the lead, but Hull City’s Sono Aluko netted the equalizer to ensure both teams shared the points. Aluko’s equalizer meant that Hull move out of the bottom three on goal-difference. Meanwhile, Everton have failed to reproduce their form from last season, and have picked up six points from a possible 15 in their last five matches. They sit eleventh.

Romelu Lukaku (Everton) – hasn’t reproduced last season’s form, but he has three goals in his last four matches and is arguably Everton’s most valuable player this season.

Sergio Aguero took his goal tally for the season to 14 after netting a brace against the Black Cats. Sunderland took the lead, through Connor Wickham, and were looking to stretch their unbeaten run to six games, but Aguero made sure that didn’t happen after putting his team level two minutes later. He then set up teammate Stefan Jovetic for the second. City went on to score two more in the second-half. Defender Pablo Zabaleta scored the third, before Aguero found the net for the second time in the match. City remain six points behind leaders Chelsea, while Sunderland are only two points from safety.

Sergio Aguero (Man City) – City’s best player this season by a mile. The Argentinian has managed to shrug off his recent injuries and looks in top form. He’ll be hoping to reach 20 goals before the end of December, why not?