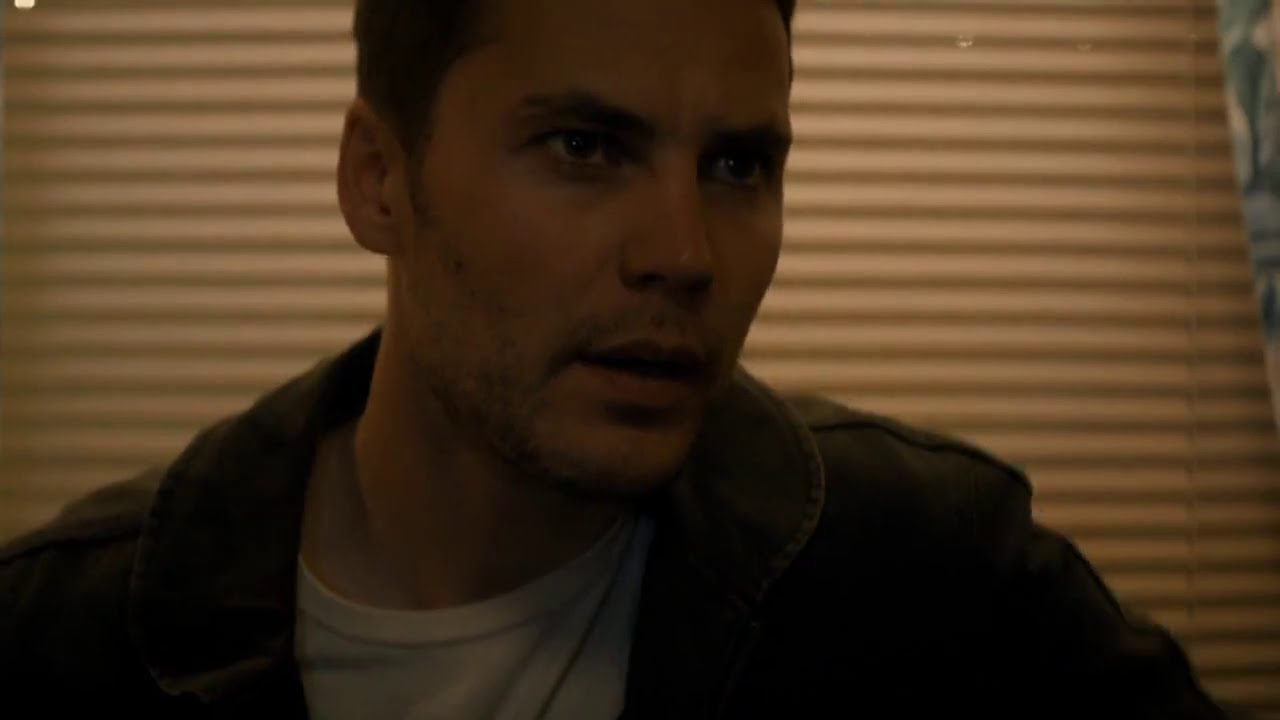 True Detective has been the subject of relentless criticism during Season 2. It’s almost become the cool new trend to hate on Nic Pizzolatto’s creation. Have these six episodes heading into our latest seventh been a collective masterpiece? Naturally, no. A reasonable level of the criticism has been justified. Nevertheless, this series has still been high quality television full of memorable performances, hardly the painfully misconstrued, comically off-putting mess the saltiest of haters would have one believe. I stand by True Detective even with its flaws, and to that end, I welcome judgment.

We open with Paul looking over files obtained from last week. Ani and Ray are together in the aftermath of the party, Ani being understandably shaken, Ray hoping to smoke a joint. She briefly dives into her apparent experience of sexual abuse during childhood before snapping back into a less crazed state of mind. Vulnerable and horrified, she makes a move on Colin Farrell. He handles it without offending before leaving to talk business with Paul. On Paul’s phone are pictures of he and his on-and-off fling from the military, an out-of-nowhere plot decision that removes Taylor Kitsch from the scene.

Is it possible that Ani could face legal repercussions for her violence at the party? That’s a potential issue worth keeping in mind. On the earlier mentioned point of True Detective being flawed and deserving of some criticism, we have Frank. Vince Vaughn has been acceptable in his performance. That doesn’t change the inconvenience of his scenes. Pizzolatto has always been methodical when needed, but Vaughn’s moments as Frank can be downright stifling. Meanwhile, it becomes known that Paul and his fiancée could be on the rocks. His past lover called Emily, telling her to ask Paul about the pictures.

Ani and her sister meet. The party has taken a considerable toll on Ani’s psyche. It reinforced her already jaded life view. Ani advises her family to skip town, and Paul moves his fiancée and mom into a motel. True Detective turns back to Frank, once again sitting across a table from Ray. They talk about Caspere’s case. What strikes me about Frank is that he’s almost too calm in his conversational tone, calm in the “I don’t need to raise my voice to intimidate” sort of way. That cool, reserved style works in moderation, but Frank’s character has been written to almost never raise his voice, to never change his tone. That suit doesn’t always fit.

True Detective shows Ani chatting with the girl she saved from the party. A human trafficking victim, she holds valuable insight into the underworld of Season 2. The recently free woman states how a friend was taken to a cabin where a camera was involved. Snuff film? Perhaps. Being stubborn, she also states how she wasn’t missing and that she had a “good thing.” When Rachel McAdams questions her placement/decision as a prostitute, the girl responds to Ani that “everything is fucking.” Classic Pizzolatto.

Frank brings up Stan again. Mercy, can we please move on from him? This time, Frank confronts one of his goons with the accusation that he eliminated Stan. In a necessary explosion for Vaughn’s character, he smashes the former friend with a glass. There’s the curious decision to go with a slow motion style rather than a regular pace. Elsewhere, when Ray meets with one of the attorneys wanting him to investigate Caspere’s case, he finds her dead. True Detective bounces back to Frank, his shiny shoe firmly placed on the man’s head.

Here we receive our answer about who Ray killed back in the day in thinking that it was his ex-wife’s rapist. The guy was a nobody methhead who Frank’s people manipulated Ray into killing. Because of a series of errors and selfish moves, Frank murders his ex-right-hand-man. Vaughn watches him die with curiosity and intrigue. Ani then meets with her father. Following years of repression and denial, Ani is now able to remember the face of the man who abused her. She had been missing for four days. This provides True Detective fans with insight into why Ani has some of her attachment issues and that trademark icy demeanor.

We assume because of the party, Ani is on the run. The police are watching her house. Her father tells her to “stay safe and stay alive,” while her sister says something alone the lines of  “be careful and get out of this.” Wow, thanks for the insightful advice! Frank brings Jordan in to see the deceased worker. He tells her that his fortunes are crumbling as competitors are after him. Like Ani and Paul did for their families earlier in True Detective, Frank advises Jordan to temporarily skip town.

I wouldn’t refer to this True Detective episode as boring, but it would be fair to call it frustrating. Episode five marked a turn of pace, a necessary forward step into exciting territory. Episode six was largely good despite only arriving at the party scene about 40 minutes in. With episode seven, and now officially near the finish line of Season 2, we still haven’t entered the belly of the beast deeply enough. I’ve stated in past reviews how Farrell and company need to directly confront these masked, snuff-film making pieces of ****. We’re simply running out of time for that resolution.

What’s more, the party angle has been mishandled. Rather than confront anyone head on, we have Ray, Ani, and Paul discussing high-ranking people amongst themselves. Last week’s party was nothing more than a tease. Here we are, 40 plus minutes in, and our main detectives have done nothing more than discuss what occurred in episode six. No major forward developments, just recaps of what we already know. This is the sort of error where True Detective deserves its criticism. It doesn’t make Season 2 a failure, it simply means Pizzolatto’s baby has been more flawed than it has a right to be.

Frank has choice words with the mayor. Backed into a corner by those around him, Frank appears ready to respond with violence. He’s been reduced to a club manager rather than the criminal mastermind he strives to embody. Outwardly, he takes this demotion with acceptance, but it’s easy to sense an underlying anger. Paul opens up to Ray about what he’s on the verge of walking into. Once Paul hangs up the phone, he meets with his past fling and enters an ominous building. People want to talk with him. The nature of the meeting isn’t immediately clear, and this whole True Detective scene feels vague.

I write these reviews while watching live, and it feels like Taylor Kitsch is about to be murdered. My hope is that True Detective doesn’t go there. Paul is confronted about his homosexual relationships of the past. He’s also confronted about the stolen document from last week’s party. This now becomes an important scene. Paul has ruffled feathers of people of a certain importance, and he obviously stole paperwork powerful enough to destroy careers, even lives.

Frank begins a rampage. He murders a casino worker before setting the entire place on fire. We turn back to Paul, who makes a necessary move to escape death. Multiple gunmen pursue Kitsch’s character as he darts through the darkness. Toward the end, this episode has gained rhythm. The last 15 minutes are superb, and that makes me wish the first 45 could’ve been equally strong. Regardless, it places the audience in a decent position for the finale.

A long shot of Ray and Ani staring at each other follows. McAdams tells Farrell that he’s not a bad man, to which he responds, “yes, I am.” Fair enough. The scene is intentionally drawn out, giving it a certain mystique. The pair lock hands as we shift toward Paul’s battle once again. Come on, Taylor Kitsch! I’ve enjoyed his character all season. In this setting, he’s able to use his military experience to his advantage. That said, he’s severely outnumbered, and he has likely never been in this building before, creating unfamiliarity with where to escape.

Blood splatters across Paul’s face as the fight continues. He takes out at least five opponents, but the “Paul is about to be murdered” vibe remains. I won’t feel comfortable with his status until the episode ends with a clear resolution. Ani and Ray light their metaphorical fire as Frank ignites a literal one. Does anyone else feel like Frank would make a fitting Grand Theft Auto villain? Perhaps someday.

Paul walks through a doorway only to be shot in the back. “Fuck you” is his way of responding to the bullet. With gritty determination, Paul crawls to a gun. He’s shot again before reaching it. GOD DAM YOU, TRUE DETECTIVE! The last moment shown is Paul’s lifeless body. Disappointment is currently overtaking me. I’m incredibly pissed about Paul’s death (assuming he died, but come on, how could he not be dead?). The sudden nature of it is shocking, and while it makes sense with the plot, it’s still an enjoyable character being wiped off the screen. Nevertheless, we have a murdered detective, and it remains to be seen if his body is simply hidden or if he’s framed as the instigator of the incident.

Lastly on that note, Paul is now not in control of his secrets. His death can be spun as a freaking out at those who threatened to reveal his homosexuality. It’s unsettling that Paul is both dead and likely to be unfairly treated even after death. A thought sticking with me is that he should’ve never entered that building without Ray. His gut hold him it was an ambush, yet he still went inside.

True Detective will have a 90-minute Season 2 finale. Much of my criticism of Frank’s character would diminish if he continues his commitment to this warpath. None of us would mind Frank picking off some of the criminals who have threatened his reign. More importantly will be what Ray and Ani accomplish. My hopes are two-fold — pain brought to the kidnappers and creeps of the True Detective world, and justice on behalf of Paul. Well done, Kitsch, you played Paul better than most expected.