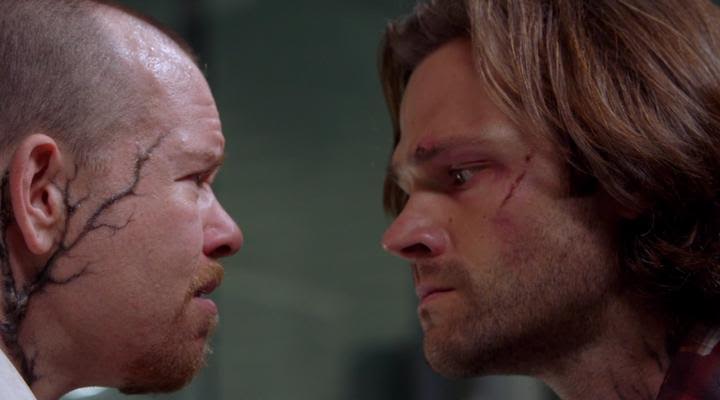 Season 11 of Supernatural kept rolling Wednesday night with its second episode, and it is apparent that things aren’t looking up for any of our characters. Releasing The Darkness, as it turns out, was a bad idea for everyone involved. Sam is infected with whatever zombie disease The Darkness created, and Dean is busy with Jenna and her newly adopted soul-devouring baby.

That’s right, our mark of Cain baby, named Amara, has a hunger for the human essence. This quickly becomes a problem when Jenna is turned into a soulless murderer while trying to care for her. Remember soulless Sam from season six of Supernatural? Jenna is even worse than that. It takes her a grand total of two-minutes without a soul before she slits her grandmas throat. Talk about having no respect for the elderly, am I right?

Amara, who is quite possibly the physical embodiment of The Darkness, is growing older at a rapid rate, and is a grown child by the end of the episode. It will be interesting to see how long they keep her at this age as it is reminiscent of Lilith from seasons three and four. It could be an effective villain, because, well, evil children freak me out.

While Dean is busy trying to get a grasp on the Amara situation, Sam is busy playing doctor and trying to find a cure to whatever it is he is infected with. One of the most interesting scenes of the episode comes in the hospital when Sam runs into a reaper named Billie. She is not pleased that Sam and Dean killed her boss (Death) and vows that the next time either one of the Winchester brothers die they will stay dead this time. No more coming back. While this sounds interesting, it is hard to believe that anything can keep Sam or Dean dead after everything they’ve been through in the past. This does add an element of danger to the series that we’re not used to, though.

Speaking of danger, Castiel is having a terrible time in the first couple episodes of the season. Misha Collins is getting to show off his acting chops, as he spent the majority of this episode screaming in agony while being tortured by Angels for information on the whereabouts of Metatron. After one of the better fight scenes we’ve seen from Supernatural in awhile, Castiel kills his captors and escapes. He is still under Rowena’s curse, however, and when the Winchesters find him in the bunker at the end of the episode, he has most certainly seen better days.

The only character who seems to be genuinely happy with everything going on is Crowley. He has actually been my favorite part of this season, because he is finally back to true Crowley form. He’s given up his budding bromance with the Winchester brothers and has gone back to his bad-ass self. He’s ruthless, kills first, and asks questions later. Rowena really got to him when she told Crowley he was just Sam and Dean’s side-kick.

Crowley decides that he would like to have Amara as an ally when he learns that she eats souls rather than Wheaties for breakfast. In true Crowley fashion, he rounds up an entire family, ripe with souls, to feed Amara and get him in her good graces. Her smile at the van filled with the kidnapped family is one of the more creepy images I’ve seen in quite awhile.

This episode of Supernatual wasn’t groundbreaking in any way, but it did its job of setting up many plot points for the season to come. We now have a healthy Sam who has been rid of The Darkness disease, a viable villian, a cold-blooded Crowley, and finally Sam, Dean and Castiel are together once again.

I truly hope the Reaper is right and if Sam or Dean die they must stay dead. It adds a sense of danger to the characters we haven’t had since the beginning of the series. I also hope it isn’t too long before they break away from the main story arc and do some humorous episodes, or some monster of the week style episodes like they used to do, as they tend to be my favorites. This season is good so far, but I feel like it is setting itself up to be one of the best in recent years.