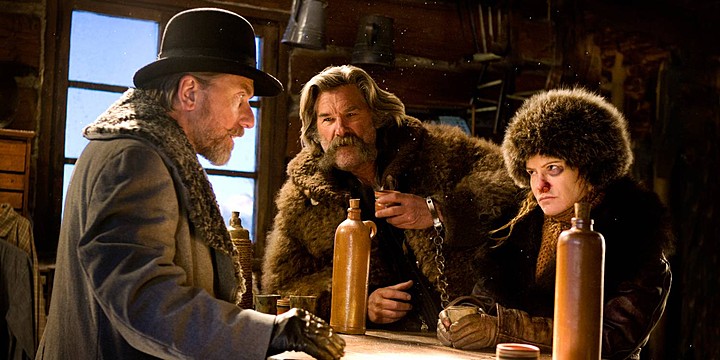 Tarantino, this time accompanied by Ennio Morricone’s score, is arguably at his most talented in terms of storytelling and suspense with this film. He build scenes of tension-filled stare-downs and accompanies them with dialogue that bites hard. Tarantino’s slick wordplay, done with his usual flair, allows players like Samuel L. Jackson to chew the scenery and savor every piece. The script plays out like a post-Civil War version of the film Clue that’s filled with good old ultra-violence.

The main issue of the film is that it drags at certain parts. There are a few long stretches of slow, dialogue-heavy scenes (even for Tarantino) that require you to refocus at times, as Tarantino flexes his pen. It’s not quite as tedious as Deathproof was as a whole, but it certainly takes its’s time telling the story. The film seems to almost wear out its welcome in the first-half, until it revs up again to live up to its name. There’s also one character that was miscast, as he’s played in an odd manner by Channing Tatum. Simply put, Tatum just doesn’t fit in with this crew of degenerate killers, and that might have been done on purpose, but it just didn’t click. I take it he was hired for the same reason Keanu Reeves was allowed to be in Bram Stoker’s Dracula, starring opposite Academy Award Nominee Gary Oldman.

Kurt Russell as John Ruth “The Hangman” is cut from the cloth of the traditional art of manliness. Russell even pulls off a voice that blatantly resembles John Wayne. It’s comforting to see Russell play a no nonsense, emphatic character again, and he definitely seems like he’s having fun in the role. Walton Goggins is another highlight of the talented cast, especially because he tackles the role of a racist sheriff quite well, managing to be despicable until certain events allow him to evolve.

Samuel L. Jackson as Major Marquis Warren absolutely kills his role, sticks the head on a pike and raises it up as his triumphant symbol of victory. Jackson is a master at chewing scenery, and he does so with gusto. He plays a badass, grisly character that takes aim in doing some twisted things, yet still preserves some good inside of him. Concerning Tarantino films, this performance from Jackson is up there with his turn as Jules Winnfield; however, it doesn’t quite bump Winnfield off the number one spot. Jennifer Jason Leigh as Daisy Domergue also shines as the fugitive with the devil in her eyes. She comes off as a psychotic version of Allison Reynolds from The Breakfast Club, and she pulls it off perfectly. Leigh is definitely one of the best things about The Hateful Eight, stealing scenes left and right from a very talented cast.

The rest of the players do a mighty fine job, and there’s even a bit of a Reservoir Dogs reunion with Tim Roth and Michael Madsen. They each have their moments in the finely written whodunnit script, and if you can keep in mind that you might need some coffee for the slower parts, you’ll enjoy a film that mostly works. The flick becomes more entertaining as the mystery unravels.

The Hateful Eight, at its core, is a high-art exploitation film that tackles the subjects of justice and racism in an entertaining manner. For example, Tarantino comments, through his character’s dialogue, that frontier justice versus civil justice differs simply because one is lacking passion. Tarantino will drop some knowledge like this, and also incorporate some well-crafted, beautiful shots; however, he will then go off in a completely different direction and shoot someone’s face off. And for that, he’s brilliant.