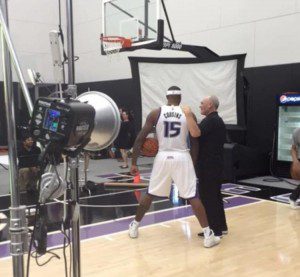 What’s left to talk about when it comes to Sacramento?

Their star center has been suspended, their coach just had a cancer removed on Thursday, and the team keeps on losing. Barring any injuries, the team can’t reach any new lows. Without intentionally trying to use cliches, at their is only one direction you can go from rock bottom.

Somehow the Sacramento Kings find a way to keep on digging.

But, George Karl sees this differently. After the game, Karl told The BMF that, “I don’t think it’s doomsday. I think we are still a team that can play complete basketball.”

The fact that doomsday and complete basketball are even mentioned in the same sentence should tell you enough about the season.

Tonight, it was a game against the Orlando Magic. A hungry team looking to cash in their Visa Gold Card and claim the “free win” earnings that are given when playing Sacramento. A limited time offer that comes with playing the Kings. 38 other teams have cashed in thus far and there is still a quarter of a season left.

Orlando was no different.

Immediately starting with an impactful defense, the Kings were held to just 11 percent from the field for a total of six points in the first eight minutes of action. A 17-6 run allowed to start the game.

Again without the services of Ben McLemore, Marco Belinelli and Seth Curry provided a big push to end the first. Combining for eight quick points toward the end of the quarter the Kings were able to cut the deficit to six.

The Kings found some rhythm offensively in the second quarter, but in very isolated sets. The team struggled to move the ball and create space, especially without Cousins. At the end of the first half, only two players for the Kings had assists but were somehow only down by one.

To start the second half, rookie Willie Cauley-Stein was replaced by Kosta Koufos who provided valuable minutes through the game. Struggling to find his offense throughout the season, “2K” had 19 points on an impressive 8-10 from the field.

One of his best performances offensively as a King.

But, it didn’t matter as the King could not stop the Magic offensively in the fourth. Orlando started the quarter on a 15-6 run and never looked back. Both the Kings offense and defense was so dull that the wave broke out amongst the fans and was the showcase talent of the night.

It was so mesmerizing that no one realized the Kings let Aaron Gordon score 20, Victor Oladipo 18, and the GOAT Jason Smith his usual 16. Smith’s career average is six points per game.

The Kings gave up another very winnable game and fell to Orlando, 107-100. Another lethargic looking performance from Sacramento in what is a skid that seems to never end.

The skid continues as the Kings take on the Jazz this Sunday and aim to break mental fatigue as much as their record.

As for the Magic, they continue their road trip and take on the Trail Blazers Saturday night in Portland.